The French are saying ‘Non’ again and this time it was the students who went on strike.  When my daughter went to her lycée on Monday, the students decided to barricade the doors and not let anybody in.  When she and her friend tried to get in a side door, because they wanted to finish their history project, the teachers wouldn’t let them in because it was a ‘teachers only’ entrance! 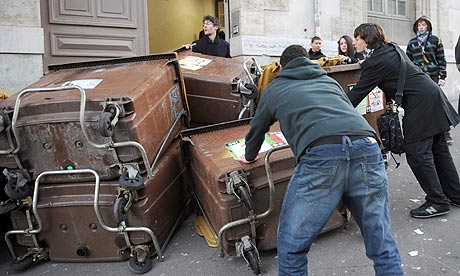 Putting the Wheelie Bins to Good Use

Apparently Sarkozy is proposing that the school holidays be shortened .  The summer holidays here in France start right at the beginning of July and continue until the first week of September – it’s a long time.  However, the school days are long.  They start before 8 in the morning and don’t finish until around 5, although they do have Wednesday afternoons off .

What I believe is proposed  – and I only have my daughter and her friends’ take on this because I can’t find anything about it on the internet – is that the summer holidays will be cut  by 3 or 4 weeks but the school day will be shortened to something like 9 until 4.   Personally, I would rather have shorter days  as was the case when I was at school (with Noah) in England.  To be honest, by the time September comes around, my daughters have started to get bored and actually look forward to going back to school.  Maybe that was the cunning plan.

Anyway, on Tuesday she was the only one in her class who turned up for lessons and, to her delight (I jest), the maths teacher decided to take the class anyway.  So she had a private lesson, which she sorely needs if I’m honest,  but still.  In the afternoon I went to collect her as all the others were going up the road to block the doors of another lycée which is evidently home to  less militant students.

Ironically, although today is Wednesday and she would normally have the afternoon off, it is a ‘catching up’ day so she  is there all day.  They are catching up because Thursday is a bank holiday and, as often happens here in France, they take the Friday off as well in order to have a nice long weekend.

Ah well.  I have no comment except to say I was only grateful that I didn’t have to queue for ages trying to get round roundabouts  set ablaze which is a common feature of  French strike action.

This entry was posted on May 12, 2010, 13:50 and is filed under Life in France. You can follow any responses to this entry through RSS 2.0. You can leave a response, or trackback from your own site.