The trouble with natural disasters or wars in far flung countries is that the sheer scale of the thing sometimes makes it difficult to relate to.  I remember reading about a journalist who had to be brought home from a country suffering  a violent military coup.  On the bus taking the journalists and officials to the airport, she saw newly homeless people trudging along in misery and even dead bodies by the side of the road.  But the thing that stuck in her mind was a little dog, obviously a pet, who had been left behind in the mayhem and, when he saw the bus approaching what was left of his village, ran up to it in excitement.  But, despite the pleas of some of the passengers, the bus driver wouldn’t stop and her abiding memory was looking out of the back window and seeing the dog running after the bus. 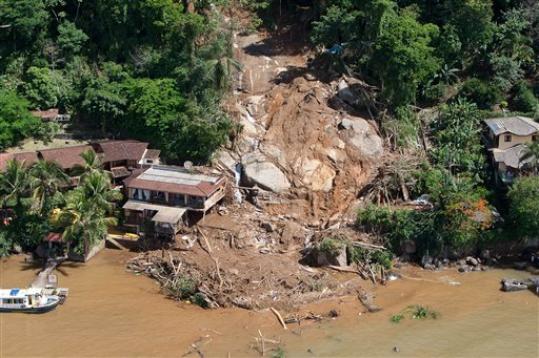 I remembered that story last night after watching footage of the mudslides in Brazil on British T.V.  People have been killed and injured, some are still missing and many are homeless.   They showed film of a woman clinging to what remained of her house amidst swirling muddy water.  She had her little dog under one arm.  Her neighbours threw her a rope to cling onto so that she could jump free of the wreckage of her house and be pulled to relative safety.  She jumped into the water, still holding  the dog,  but the current was too strong for her to hold on to the rope with one hand and, as she reached up with her other hand,  the dog was swept away.

I thought at the time, ‘why that particular footage?’ , out of all the terrible things going on.  But, since then, it is that image that haunts me.  It’s strange but I guess we need the individual stories to empathise with in order  to appreciate  the sheer enormity and scale of a disaster.

This entry was posted on January 14, 2011, 11:12 and is filed under Life in General. You can follow any responses to this entry through RSS 2.0. You can leave a response, or trackback from your own site.