Excuses Not to Do The Man Chores No. 1

As a supplement to my occasional ‘Excuses Not to Do the Housework’ feature, I have now discovered that Mr. Tialys has entered into the spirit of the thing and is finding his own excuses not to do things that normally come under his domain, for example, grouting tiles in, unblocking plumbing pipes, putting up shelves to name but a few things outstanding at the moment

As it has been so cold here lately and we had not been quick enough to think about emptying the huge water butt outside the back door, the water inside froze and cracked the plastic.  Mr. T. emptied the huge block of ice out into the garden and I thought no more about it.  I heard the sound of the chainsaw and thought he was preparing more logs for the fire but then I was called to admire this 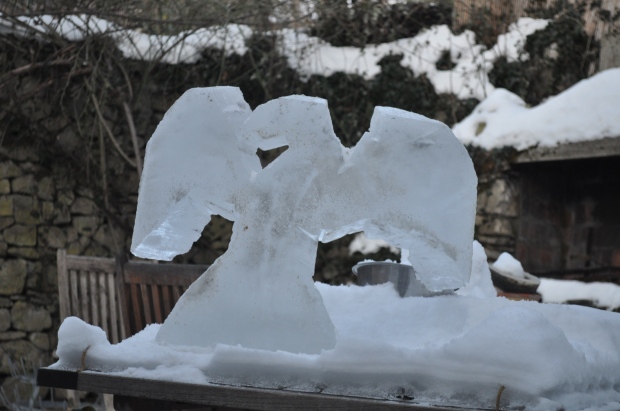 (If he asks – just say you knew it was an eagle)

This entry was posted on February 13, 2012, 19:34 and is filed under Excuses Not to do the Housework. You can follow any responses to this entry through RSS 2.0. You can leave a response, or trackback from your own site.