I Thought It Was Sunday

In France, unlike the U.K., they tend to have their public holidays on the day of the actual event that they are commemorating or celebrating.  Hence, the 1st of May is a ferié (or public holiday) on the actual 1st of May which, this year happens to be a Wednesday.  Of course, if this were the U.K., the 1st May would have become the 3rd May, which is a Friday this year, so that it could be tagged on to the weekend.  With me so far?

One cause for celebration is that on the 1st May in France, it is permitted to erect a stand (or indeed, just stand) by the side of the road and sell muguets (or lily of the valley) without having to pay tax on any proceeds.  This is the one and only day that this is ever allowed and you can’t stop at a bakery or pharmacy (everything else is closed, of course, this being rural France) without seeing somebody with little posies of lily of the valley for sale.

I am confused because there was a vide grenier or flea market  today.  Usually they are on sundays (or occasionally saturdays) but today is wednesday and I went to one this morning and now I can’t get my head round the days of the week.  I will probably try to watch Antiques Roadshow tonight now after cooking a roast dinner.

Anyway, this doesn’t lead on at all nicely but I’m going to tell you anyway that I went on a guided tour of  Toulouse last week.  Well, a small part of it anyway.  Usually I just go to shop or to eat or to watch a film in VO (or version originale which translates, in my case, to ‘in English’) so I thought it might be interesting to hear about some of its long and interesting history.  I don’t usually like guided tours – I think the last one I went on was at school and we went to see Stonehenge which was so long ago I think it had only just been built.  Anyway, some friends were going on it and there was a promise of a good lunch afterwards so I signed up.  I won’t bore you with the details and history – and anyway I can’t remember most of it now which is another reason I don’t normally bother going on them – but I did take a couple of photos.

Love these gothic carvings which were originally inside this church but were one of the only features to survive some disaster or another (see, I told you I don’t retain) and were put on the outside of the church afterward.  Of course, being France, somebody has plonked an electricity box just to the top left of it (!) but never mind, I just love these little men.  And, to think Ikea is trying to get us to ‘say no to gnomes’. 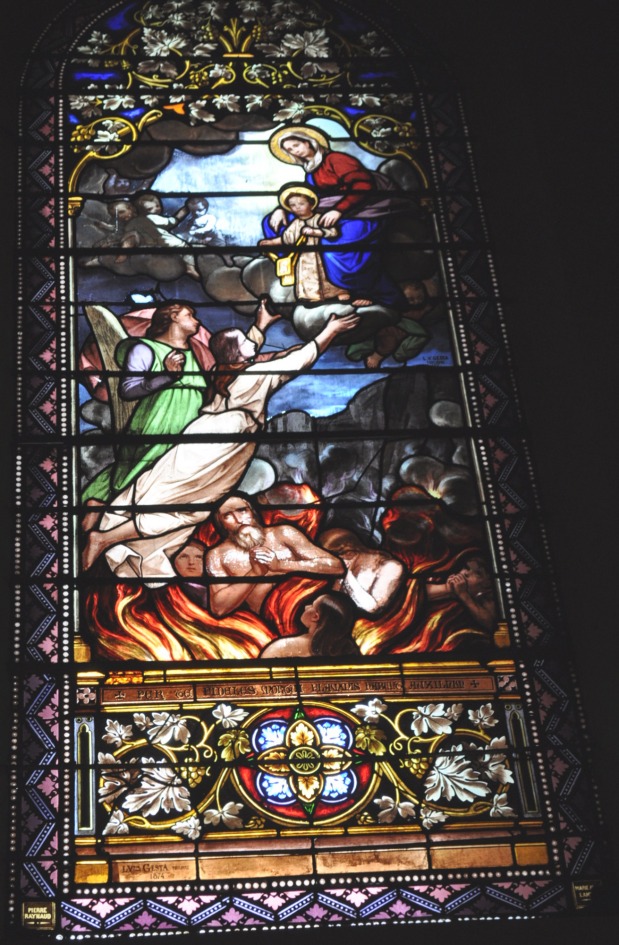 Inside the same medieval church, were some beautiful stained glass windows by a French artist Louis Gesta in the 19th century who had his atélier in Toulouse which was the “largest stained glass window-manufacturing firm in the world” at the time.   Despite this, and building a castle for himself in Toulouse, he ended his life in poverty having ‘overextedended’ himself according to my guide. 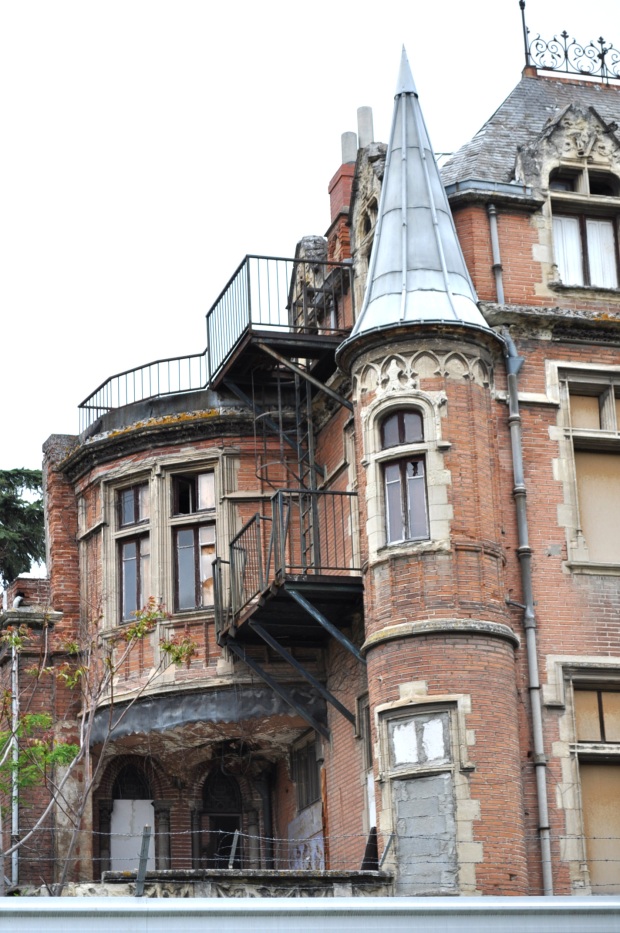 The shameful sight of part of the castle that Gesta had built in Toulouse in the 19th century using reclaimed friezes, moldings and other decorations and materials from medieval buildings as well as the traditional Toulouse bricks.  At one time this was occupied by a language school and they wanted to buy it but the city of  Toulouse wouldn’t let them.  The city then proceeded to leave it to fall into ruin and eventually it was taken over by squatters who set fire to the inside and gutted it.  There were beautiful paintings and other artwork inside apparently.  It has now been boarded up and has a corrugated fence surrounding it and there is talk of knocking it down.  See, I do listen.

Another gothic arch , another graffiti ‘artist’

However, not everything makes it on to Ebay.

On the ‘making things’  front, I have received my dressmaking patterns, having been influenced and inspired by the Great British Sewing Bee and the fact that I ‘ran up’ a couple of skirts recently in super quick time, and now await the arrival of dressmaking fabric which somehow sounds much grander than craft fabric.  I love the term ‘ran up’.  Where did it come from?  Who first coined the phrase ‘I’m just off to run up a couple of skirts’ and were they misunderstood?  Sorry, just rambling there.  Anyway, I have decided that my love of Liberty tana lawn need not stop at the ears of bunnies and the linings of storage baskets or purses.  Indeed, I have a yen for a floaty, feminine summery blouse and so I have yet another excuse to indulge my Liberty obsession as my current stash doesn’t seem to have just the ‘right’ design for a blouse.

Meanwhile, I have been getting sticky again with some cartonnage and enlisted my friend Sandra for her embroidery skills as mine are non existent and it’s one of those crafts that don’t appeal to me – too fiddly – so I probably won’t bother to learn anything more complicated than a ‘tige’ which I believe translates as a stem stitch.

All sorts of fancy stitches going on there – I can’t be doing with it!

Anyway, it’s not Sunday, it’s Wednesday so I am off to do some more work and, just in case you are wondering whether I actually bought anything at the flea market this morning, I did.  This is one of my favourites –

or Puss in Boots.

This seems to be some sort of pop-up version of the Great British Sewing Bee.  Make a costume for a cat in less than one hour.  The tailor on the left seems to have lost part of his head so he won’t be back for another week! 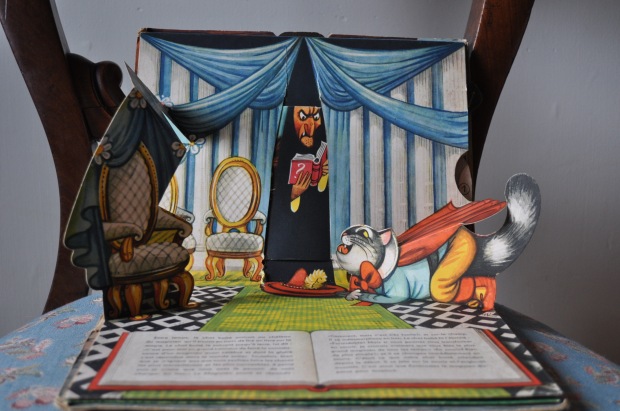 Aaah, the nostalgia.  Not that I was a particularly gifted tot who could read French  but you know what I mean.

and, as in all the best fairy tales, it ends happily ever after – although I don’t know where the cat is at this point.  I hope he didn’t get run over by the coach.

Anyway, this seems to have been an, even more than usual, rambling and meandering post but, you know, I thought it was Sunday.

This entry was posted on May 1, 2013, 16:24 and is filed under Arts and Crafts, Life in France. You can follow any responses to this entry through RSS 2.0. You can leave a response, or trackback from your own site.