Having made Tilly’s Coco dress for my daughter, I decided to make the funnel neck version  for me with some double knit jersey I got when I was over in the U.K.  However, it is quite thick fabric and, although it seems just the right thickness and stability for the style,  I won’t be able to wear it much before it gets too hot here.

So, I wore it the other day and took some photos but the light was soooo terrible that I didn’t get any good ones.  I thought I’d better put them on though in case I don’t get around to wearing it again until the autumn.

I know, I know, I’ve cut my head off again but this is the best photo of the actual dress so I’ve used it.

Next time, I will make the sleeves a couple of inches shorter as these are supposed to be three- quarter length.

Hmm.  I’m doing some sort of hip thrust forward movement here, thus blurring the photo a bit and making it easier to see the seam of my tights.  It makes it look as though there is bunching round the waist but there isn’t (see above!).  Also, my boots look like wellies – which they aren’t – but, apart from that, you get the general idea.   I think this fabric would also have worked well as the tunic top version which has little side slits. 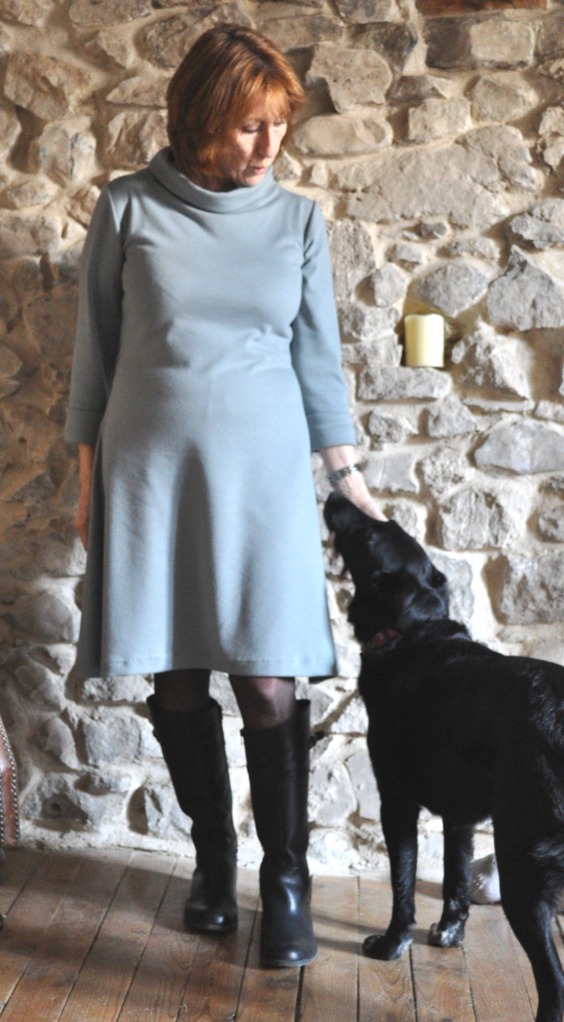 I used the overlocker to make the dress, though it isn’t necessary, and then a twin needle to do the hem.  I lengthened it by a couple of inches so it would be knee length on me as the original pattern is quite short.

An ‘action’ shot, as I like to call my blurred photographs.

Overall, a quick and easy dress to make which is really comfortable to wear and quick to pull on.  I will make some more, short sleeve versions in a slightly finer stretch knit for the warmer weather.

This entry was posted on April 6, 2014, 12:00 and is filed under Arts and Crafts. You can follow any responses to this entry through RSS 2.0. You can leave a response, or trackback from your own site.