I mostly think of sewing and knitting as a lone pursuit – although I find knitting a bit more sociable as it tends to be more portable and I don’t have to disappear upstairs where my sewing machine lives.  When I was still in the U.K. I used to go, every couple of weeks, to a local craft shop who gave over a table cunningly placed in the centre of the fabric section, to a group of us who would sew together, mostly patchwork quilting projects, in exchange for the vast quantities of fabric we would buy.  I did try joining a group here but found the projects they did a little uninspired and they didn’t seem willing to try out new things.   Three of us rebelled and started a breakaway group which, although it is now down to two, suits me fine and is a little more centred on dressmaking which is also good as that is my ‘thing’ at the moment.

I do like talking about sewing and knitting projects but my weekly sewing buddy is French and, although my Franglais isn’t too bad, it’s just not the same as chatting in your native language.  As most of my other ‘real life’ friends aren’t interested in the ins and outs of it – to say nothing of the lack of interest at home(!)  – I have turned to ‘virtual’ friends in blogland to share these interests and to find inspiration.  I  have never done a sew along or knit along online because I haven’t liked the patterns chosen or have missed the beginning or just never got round to it.  Also, I usually like working at my own pace.  However, I found myself tempted by this one which is an outfit along, a  joint venture by Lauren, sewing diva at Lladybird and Andi Satterlund, knitwear designer at Untangling Knots, this will start on 1st June and the finished outfits to be photographed and submitted on the Ravelry thread by the end of July. 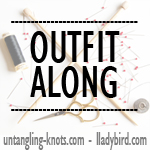 The idea is to have a finished outfit at the end of two months and this includes a dress and a short cardigan to wear over the top of it.  As luck would have it, the dress pattern suggested, Simplicity 1803,  is one that I have already and have even bought the fabric for.  Mlle. Tialys the elder has already made one for herself and it looks great on her, I’ve just never got around to making my version. 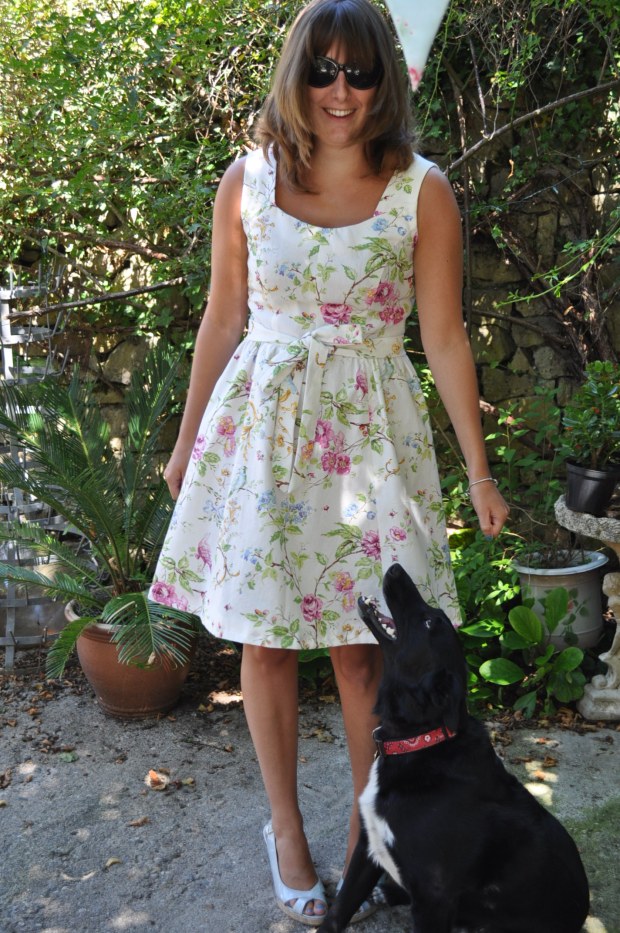 I am going to make the version with short sleeves and a slotted neckline in a spotty fabric.

The cardigan is a new design by Andi Satterlund called Myrna which I have bought, downloaded and ordered the yarn for so, once that arrives, I’m all ready to go.  I might miss out the keyhole detail on the back though as I’m not convinced it wouldn’t look like I’d just ripped a hole in it on some brambles or something.  Apart from that, I love the short sleeves, v-neck and eyelet details and I’m going to make it in a short of linen colour.  I have made one of Andi’s patterns before, the Miette (shown in my post here), another top down cardigan, which was something I’d never attempted before so it was interesting to do and knits up quickly. 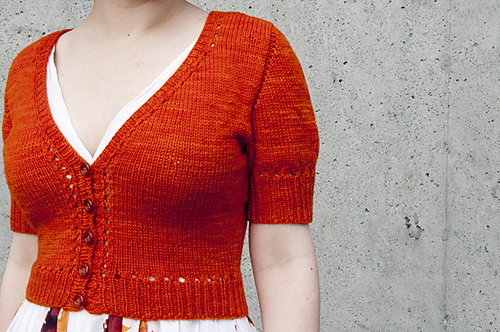 The Myrna Cardigan by Andi Satterlund

You don’t have to do either of these patterns for the Outfit Along – you could choose different dress and top patterns – but these will be the ones featured on Lauren and Andi’s blogs so, if you need any help, these would be the ones to go for.  I love them both and already have the dress pattern so an easy decision for me.  I don’t really need help with either pattern (I hope!) but I thought it would give me the push I need to finally get that dress made and, more importantly, I can feel as if I’m part of a sewing/knitting community where I can discuss any problems or little triumphs without getting the glazed look in the eyes of a less interested audience  – or at least I won’t be able to see it.

Have you ever participated in a knit along or sew along before?  If you are a beginner, would you consider it to get you started?  If you are experienced, would you go for it for the same reasons as me or have you got lots of ‘real life’ sewing friends you can  chat to about your projects.

This entry was posted on May 19, 2014, 11:48 and is filed under Arts and Crafts. You can follow any responses to this entry through RSS 2.0. You can leave a response, or trackback from your own site.