A Bronte Top, A Finished Quilt and Another Coco

I’m off across the border to Spain for a few days  so I’ve been trying to get a few projects finished.  We’re going to a theme park – I feel the nausea rising already and that’s only thinking about the winding roads we will take to get there – then we are going to see a performance by the Cirque du Soleil featuring lots of very bendy people and then, on the way back, we will visit Salvador Dali’s house now a museum.  Plus, we will go food shopping before we re-cross the border which sounds bizarre but Spain is much cheaper than France for lots of things and quite a few French people regularly drive down there to stock up on olive oil, washing powder and other groceries.  I have heard a rumour (thanks Jan F.) that cottage cheese is available and, even though I was never a particular fan, the fact that I can no longer get it makes me want some.  I am hoping (in vain I suppose) for real, fresh cream.

Anyway, here is the finished quilt that I made for the nicest and best yoga teacher in the world – you may quibble but I don’t know yours – and, although she looks vaguely bemused in this photo, I think she likes it. 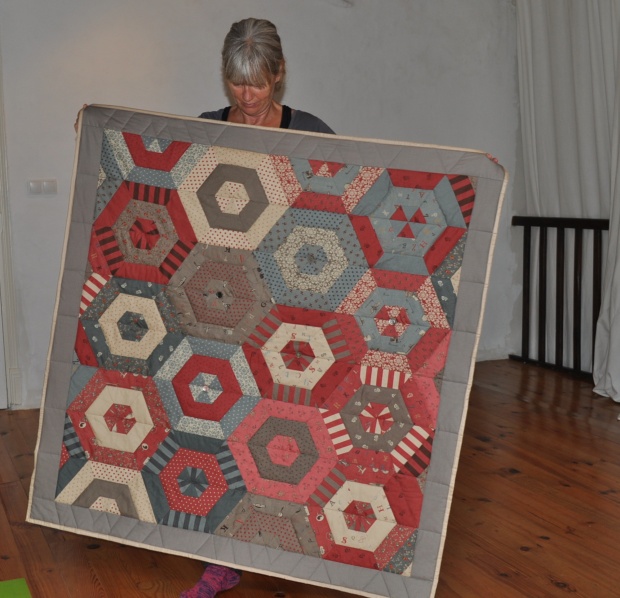 She seemed even more chuffed, however, with the quilt label I put on.  I found an image with some yoga-type words and added her name and mine plus the date.  I printed it out on transfer paper and put it on some plain fabric then attached it to the corner of the quilt.  (note: My surname isn’t really blurred but I did it in editing in case anybody felt like stalking me and sending me hate mail, especially after my anti-cyclist rant the other week!)

After I forgot to add a couple of inches to the length of my colour block Coco dress, I decided to spare the world too much of my knees and Mlle. Tialys the elder wore it back to the U.K. after her visit here a few weeks ago.  I do not expect to see it again.  However, I had already bought some more knit fabric to make another version and, this time, I did remember to lengthen it but, being disorganised as I can sometimes be, I hadn’t made a note of the measurements I used from my last pattern hack so, this time, the colour block at the top comes down lower.  I think I prefer the first version but at least this one is a keeper for me. 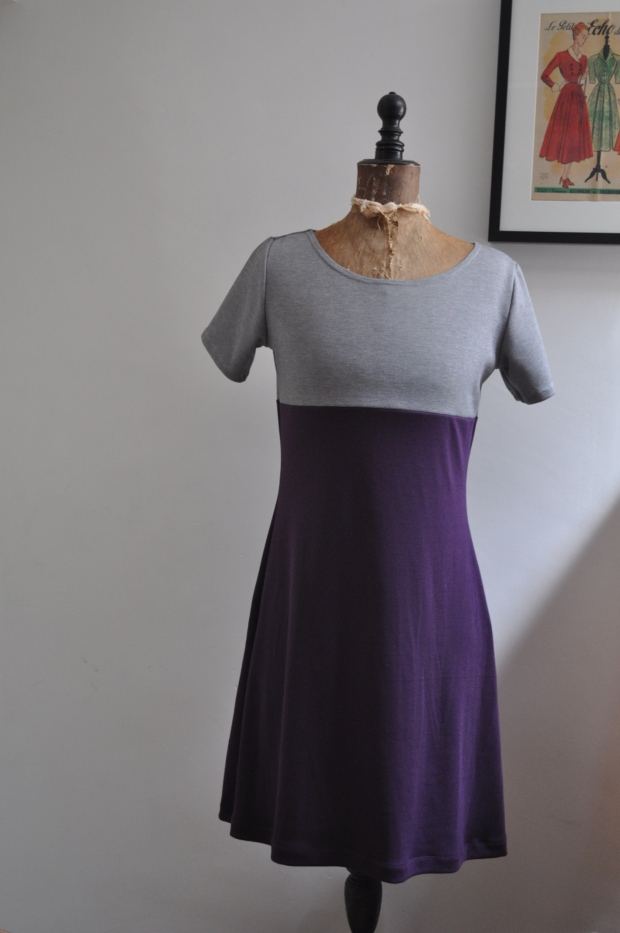 When I saw the Bronte top pattern from indie designer Jennifer Lauren, I quite fancied having a go because anything that makes t-shirts a bit more exciting has got to be worth a try.  This pattern is supposed to have a slightly vintage look in that the back actually overlaps the front forming an attractive and original neckline and having no shoulder seams.  It can be done all in one colour  but I think the detail is worth emphasizing so used some coordinating knit fabric I happened to have. 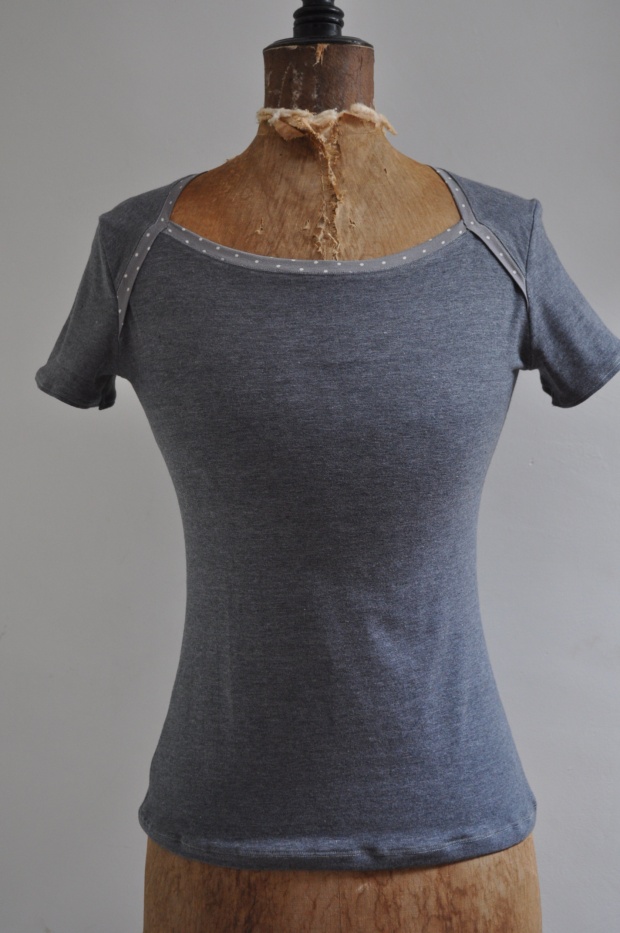 I really like it and, if you don’t look too closely, it turned out well although I have a little more of the trim showing on one side of the neck than the other. Tant pis!  Must try harder next time.  Anyway, it’s another thing I might have to give away, because it is a little tighter than I would normally wear my t-shirts.  I wasn’t sure which size to do and, the designer does warn it is a tight fitting style, but the waist and hips corresponding to my bust size were too big for me so I figured, it’s jersey, it’ll stretch and normally, I think it would, but this grey knit is quite a heavy one and the stretch is limited.  Next time, I’ll make it in a lighter, softer knit because I’ve now cut the pattern out for the smaller size and I don’t fancy printing it out all over again! 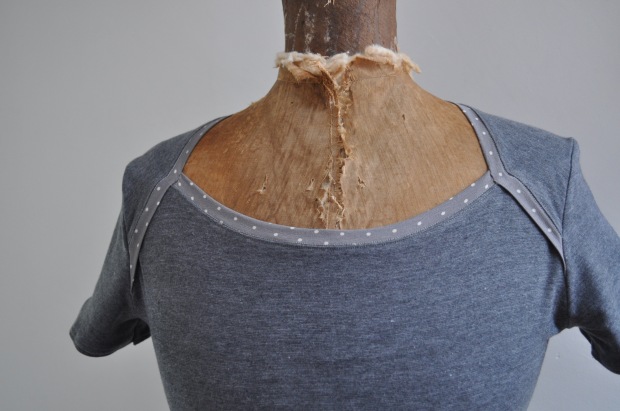 Definitely one I’ll make again – paying more attention to the trim next time.  The pattern has a long sleeved option too and I’m wondering about the possibility of doing a pattern hack and making it into a dress with fitted bodice and slightly swirly skirt.  Get me and my fancy ideas! 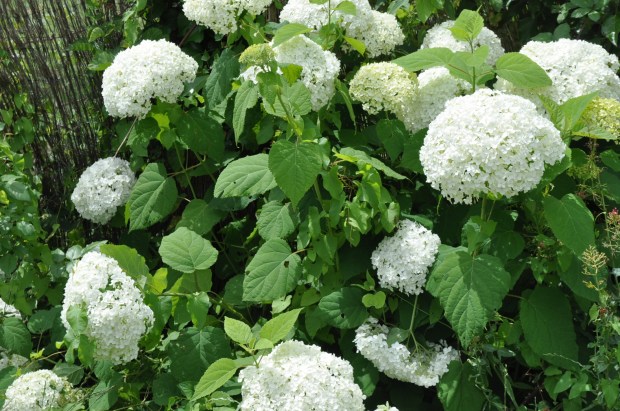 Just to prove I do venture outside sometimes, this gorgeous hydrangea with dinner plate sized heads flowers away in a neglected corner of our garden.

What I especially like about it is you only have to cut one head to fill a vase which is all apropos of nothing in particular but does remind me that tomorrow is the  anniversary of the day when the French cut their King’s head off and duffed up all the posh people.   So, yet another public holiday with some fireworks in the evening to celebrate the fact they now have a president instead despite the fact they all seem to hate the present holder of the title so, if I were him, I’d keep one eye open at night.

This entry was posted on July 13, 2014, 15:51 and is filed under Arts and Crafts, Dressmaking Projects. You can follow any responses to this entry through RSS 2.0. You can leave a response, or trackback from your own site.