Much as I love this dog, I don’t really make quilts, especially not quilts made from Liberty tana lawn, for the benefit of my pets.  Instead, I go to the local charity shop once every few months and buy up some used blankets which I put in their beds and, once they have been chewed, ripped to shreds or made ‘dog smelly’,  I dispose of them and go back to the charity shop.  However, Flo had other ideas and took advantage of the fact that I was doing some artistic ‘draping’ for purposes of photography to dive on top.

Although I used the fence around the chicken hut to lay the quilt over, the chickens don’t seem to feel the need to lay on soft blankets so the quilt was safe for the outside shots.

As a point of interest and not really relevant to this blog post, one of the words I have soooo much trouble with in French is ‘poulailler’.  Now, most people could probably survive without ever having to say it but, as I keep chickens, and as it means ‘henhouse’, it is a word that I sometimes need to say, much to the amusement of anybody French that is listening at the time.  The other word I have difficulty with, which also contains lots of the letter L, is ‘rouille’ as this also necessitates rolling the ‘r’ in front before twisting your tongue around the ‘ou’ sound and that double ‘L’.  As ‘rouille’ means ‘rust’ it is a word that, for various reasons, I do find myself using quite frequently.

Anyway, I digress.  As suggested by several of you when I asked for advice on this particular project, I quilted it using wavy lines which I think works well.  Somebody said they would look ‘organic’ but, as I didn’t mark anything out apart from the distance between the lines and really just followed my (wonky) eye down the quilt, vaguely trying to echo the line before, I think that might be quite a flattering word for it.  I’m going to stick with it anyway.

It appears that one of the advantages of using bands of fabric the width of the quilt means that, when folded lengthwise and placed on a sofa or chair or wherever, you are able to see the full range of fabrics used which is not always the case with more complicated designs.

Persuaded by a friend of mine to start a new quilt together, I have resolved to finish the last bit of hand quilting and add the binding to one I had almost completed but, as I had draped it over a chair in my workroom, it became to look like part of the furniture so I sort of considered it finished.  It wasn’t!

So this weekend should see the ‘handbag quilt’, first blogged about an embarrassingly long time ago, completed and then I won’t feel guilty about starting a new one.

Meanwhile, I must remove a dog from a quilt. 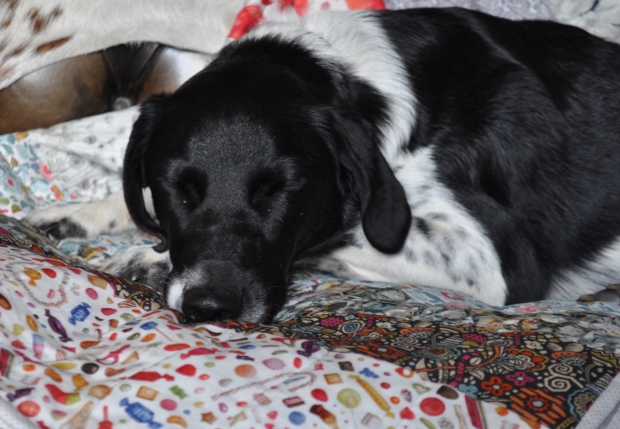 No use pretending to be asleep.

This entry was posted on January 31, 2015, 15:08 and is filed under Arts and Crafts, Pets & Problems. You can follow any responses to this entry through RSS 2.0. You can leave a response, or trackback from your own site.