A Quilting We Will Go……. 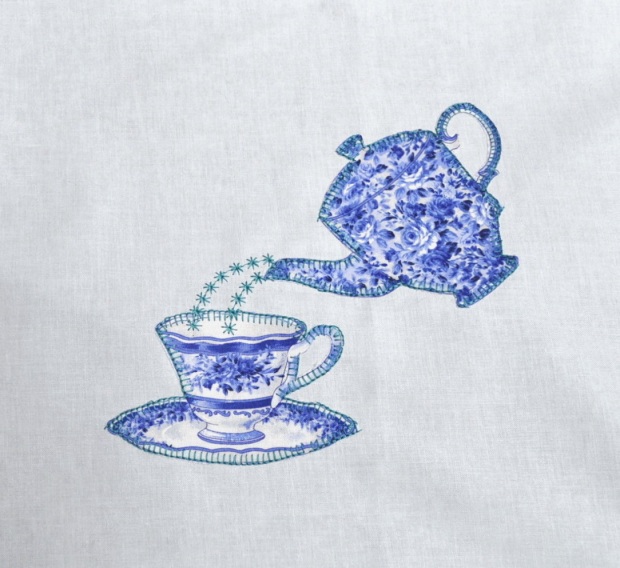 Having received all my blocks from the F2F block swap back at the end of October and having signed up to do it all over again later this year, I really want to get this quilt finished before starting the next swap.  I have made a start by laying out the blocks in rows as they will appear on the final quilt and then putting them into bundles of eight blocks not forgetting to label each bundle with the row number. 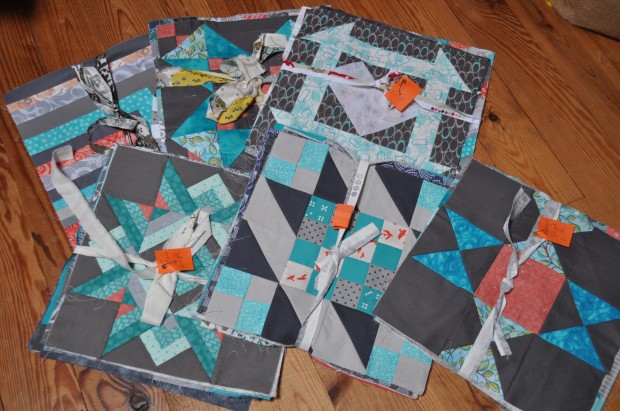 Some of the participants are making a  couple of smaller quilts with their 36 12.5 inch blocks but I have a Superking size bed so a huge quilt is needed in my case.   Apart from the quilt we made for Pat which we rushed to get finished in order for her to see it before succumbing to ovarian cancer,  Avis from Sew Tempting was the first to finish her quilt which is beautiful and has inspired me to get a move on.

These are the four backing fabrics I’m using which I chose to coordinate with the top. 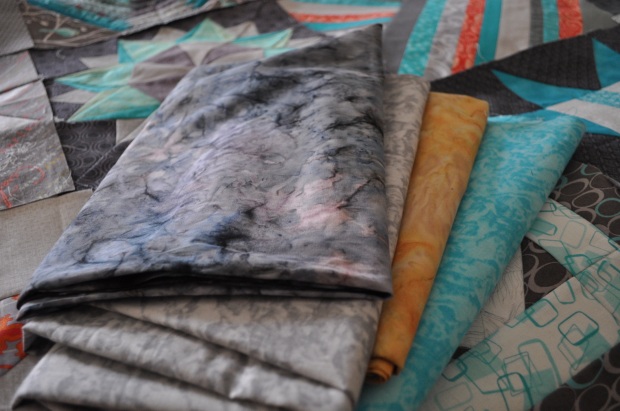 Here is my complicated and technical ‘plan’ for which blocks will be backed with which colour.  I know you’ll be mightily impressed but I have to keep it simple otherwise I get a headache 😉 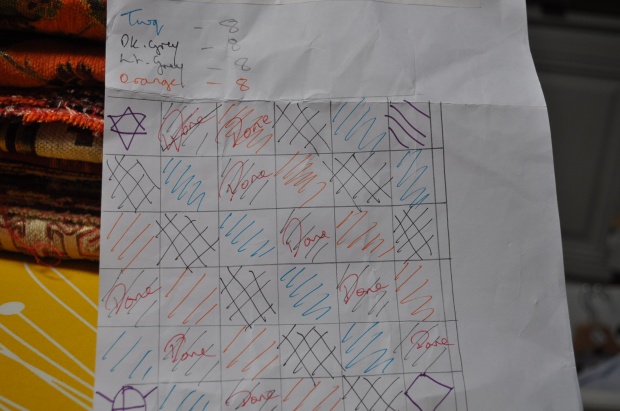 The four corners I’m not sure about yet  but I’ll think of something.

My hand quilting is not perfect by any means and I am very slow at it too and, with such a large quilt, I would be here forever if I attempted to do it all by hand.  My machine is not particularly adapted for quilting and I couldn’t bear the thought of forcing the huge quilt sandwich through it so I am using the quilt as you go method.  This way, I can make each block into a sandwich with the backing and a layer of wadding and quilt them individually.  I am going to use this tutorial which has been recommended to me by several of my quilting friends in blogland. 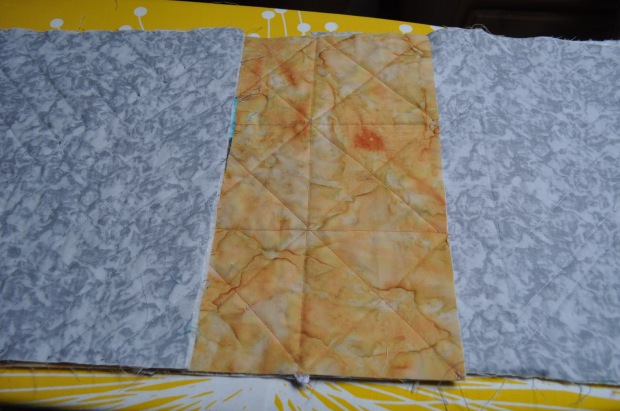 This also means I can quilt each block according to the design on the front.  Much easier to handle – although I’m still not quilting them all (if any) by hand! 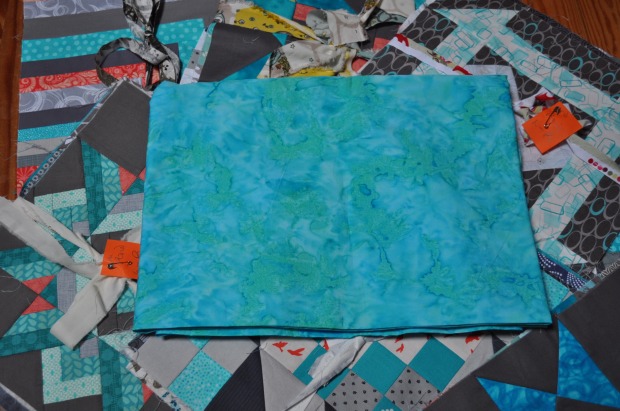 and here’s one of the blocks I’ve made into a ‘sandwich’ so far  – it’s one of the lovely blocks that Kate, who jointly organised the F2F swap, sent me. 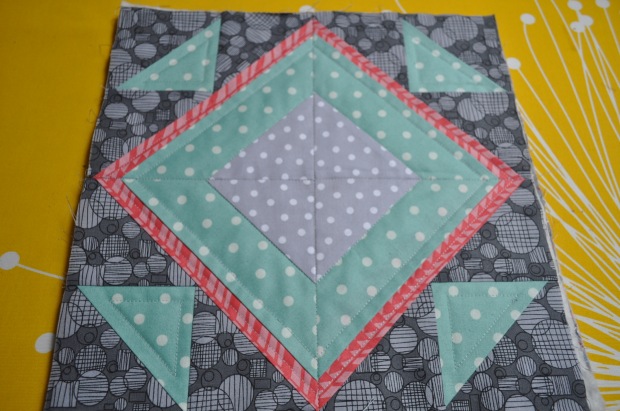 Apologies for the garish yellow background but the only decent light for photography that day was underneath the skylight in my workroom which is where my ironing board normally sits and that’s the cover!

Since we made the quilt for Pat which will be auctioned in aid of an ovarian cancer charity in the U.S., Kate decided to contact the equivalent organisation in Melbourne and offer to make a quilt – using teal and cream or tan to raise funds for them.  She asked her blog followers if anybody wanted to contribute a block or two so I made the one in the top photograph which I’m hoping she will be able to use in the centre of the quilt which she wants to resemble a large tablecloth laid out for tea.  I didn’t have any teal fabrics at that stage but did have some teal coloured thread so used it for the appliqué stitching and for the ‘tea pouring’ effect.  Then there will be a border of dresden plate blocks so I’m going to have a go at making one with the help of some pieces of teal fabric kindly sent to me by Ali over at Thimberlina who has also made a couple of blocks for the quilt.  Then, there will be an outer border of more freestyle blocks made using the same colours.  Kate is calling it ‘Time For Teal’  – she does love a pun.

When we moved into our house there was a huge, hand made ladder hanging up in the shed.  It was really too big and probably too dangerous to actually climb up so Mr. T recently treated it for woodworm, sanded it down, gave it a couple of coats of varnish and cut it in half.

I’m using one of the halves for a quilt ladder. 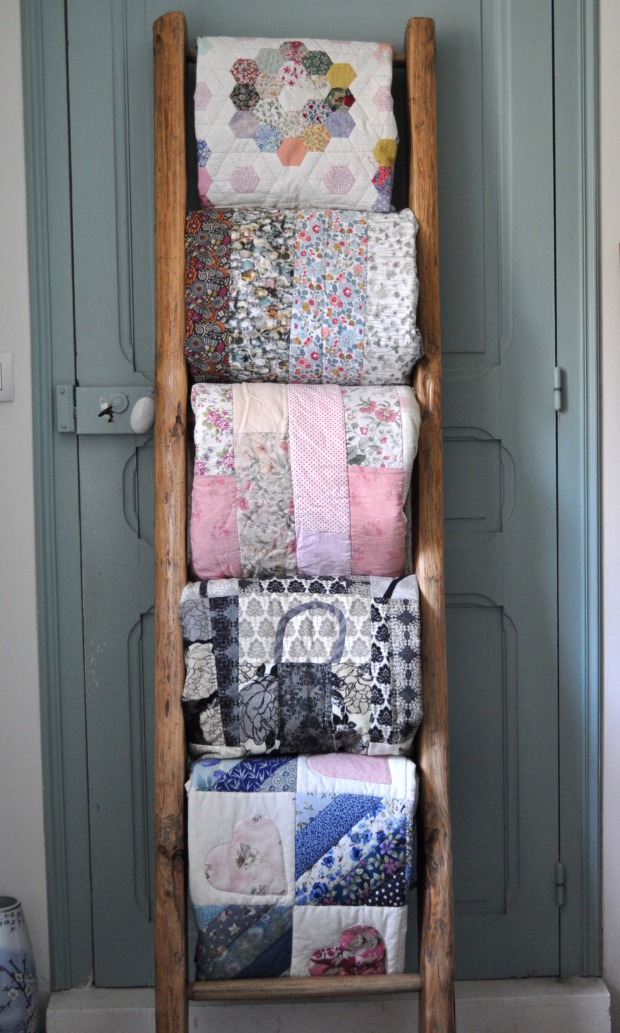 I am running out of room to drape, throw, fold and generally exhibit quilts around the house so it seemed like a good idea to store and display several of them at once.   It doesn’t normally stand in front of a door but there wasn’t enough natural light to take a photo of it in its usual position.  Luckily I am a very slow quilt maker but there is always the second half of the original ladder to fill.

This entry was posted on March 20, 2016, 13:07 and is filed under Arts and Crafts. You can follow any responses to this entry through RSS 2.0. You can leave a response, or trackback from your own site.