When An Inch Makes All The Difference

This is what I mean

With the amount of independent designers creating patterns to be printed off as PDF files these days, those of you who use them for dressmaking, patchwork  or other crafts will know what I mean by the all important inch square when printing patterns.  There is no use briefly wafting a tape measure in the general direction of the square and saying ‘yes, that’s about right’ because a minute fraction of an inch bigger or smaller is a mistake that will multiply itself throughout the whole pattern and you will end up with something too big, too small and possibly unusable.

I don’t really hold myself completely to blame as I have never set any scaling on my printer but it seems to have taken control and robbed that inch of a teeny tiny morsel so that after two or three hours of painstaking cutting out, sewing on, joining up and congratulating myself on a beautiful bit of paper piecing, I placed my 12.5 inch square ruler on top of it and realised it was the wrong size.

So this block that I had been so proud of only minutes earlier…..

….. had to have a border put round it to bring it up to the requisite 12.5 inches as it is for the new round of F2F Block Swap which starts this month where all the blocks need to be the same size.

So, it’s still not perfect because those outer triangles have had their inner points a little truncated because of the sizing but I think I might still give it to the person I made it for either as a spare block for her eventual quilt or to make a cushion to match.

I know I’m a European and all (for now, anyway 😉 ) and should be speaking in metric tongue but, with patchwork, it really is easiest to keep it in inches.  It seems to be the universal language of patchwork – except in France.  (How is it in the rest of  non-British Europe?  – can anybody enlighten me? Do inches rule?).  When I was cutting out fabric for another FPP block the other day at my friend’s house, she only had metric rulers and cutting mats.  Quelle horreur!   However, in a desperate attempt to get on with it, I converted the centimetres into inches and cut the pieces out accordingly.  When I got them home and measured them against my imperial rulers, they were all wrong.  I think I said ‘merde’ because it is one of the few French swear words I know which is not too rude.  Although no French swear words are as bad as some of the ones I know in English (again, unless somebody can enlighten me 😉 ) So, in future, when I go to sew ‘chez Sandra’ I will be taking my own mat and ruler.

I am the first recipient of the blocks this time round and I have already made my three, two of which I have already shown you but here is a ‘little’ reminder

and this is the third one

This is called ‘Building Blocks’ – guess why.  The darker ‘side of the block’ is actually navy blue but you get the idea. I just love those little dogs.   The pale grey background, morphing into a slightly darker grey is not because the colour ran in the wash but is part of my haul of beautiful Gelato ombré fabrics.  The colour starts dark(ish) at one selvedge edge, fades gradually into the middle and then starts getting darker again.  I bought a half yard bundle and so have a lot of colours.  It is actually very useful and you can see some more of it in the pale greens I used in the ‘failed’ block I showed earlier.

I’ve decided that the colours I’ve chosen for my blocks this time round are quite ‘masculine’ and realised I have never asked Mr. T. whether he would like a quilt to have in his weekday U.K. apartment as a reminder of home comforts – or perhaps he likes to get away from the fabric fest during the week.  Anyway, he liked the idea so that is where my eventual quilt will end up – in the London flat frequented by my husband when he’s not here, shortly to be shared with Mlle. Tialys the elder who has just finished University and has landed a job in Shoreditch which, I am reliably informed, is dead trendy these days.  At least I know she will be fed properly three evenings a week.

A bit early – Sandra isn’t due to receive her blocks until July – and in the full and certain knowledge that she will not see this blog – here is the block I re-did for her after I re-sized that inch. 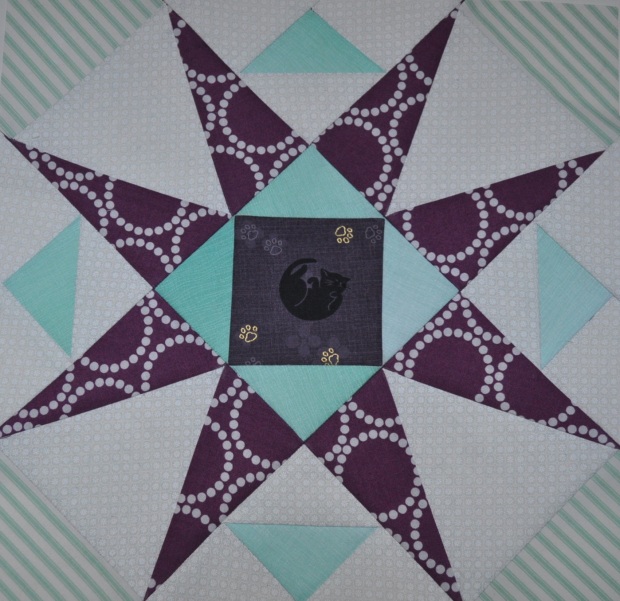 I know the stripes go in different directions on alternate corners but it was deliberate to give the block a feeling of movement – like the blades of a windmill turning.  (Yeah, right)  However, that did make sense to me once I thought of it so I’ll stick with it.

This lovely pattern is by one of our talented F2F Block Swap members, Esther, in the Netherlands.  She is so talented and I’m glad she’s participating again this time because she sent me such amazing work last year and it was what inspired me to try foundation paper piecing out for myself.  Now, I’m hooked.  She has lots of beautiful patterns available on Craftsy and you can download this one called ‘Out There’ for free on Craftsy here.  (Esther – I hope I’ve made you proud 🙂 )

Have you ever had a disastrous experience with PDF patterns?

I just wanted to take this opportunity to wish Kate of Tall Tales from Chiconia – a blogging friend and one of the organisers of the F2F swap – a full and speedy recovery from the back surgery she underwent this morning (Australian time) and hope she gets back to a normal, pain-free life and continue with the things she loves to do as soon as possible.

This entry was posted on June 3, 2016, 15:47 and is filed under Arts and Crafts, Patchwork and Quilting Projects - General. You can follow any responses to this entry through RSS 2.0. You can leave a response, or trackback from your own site.