Well, I knew the blogging community would come through for me.  I now have answers to all my questions – some of which I hadn’t even thought to ask – so thanks for all your help and I have added the correct names to the list below in bold. 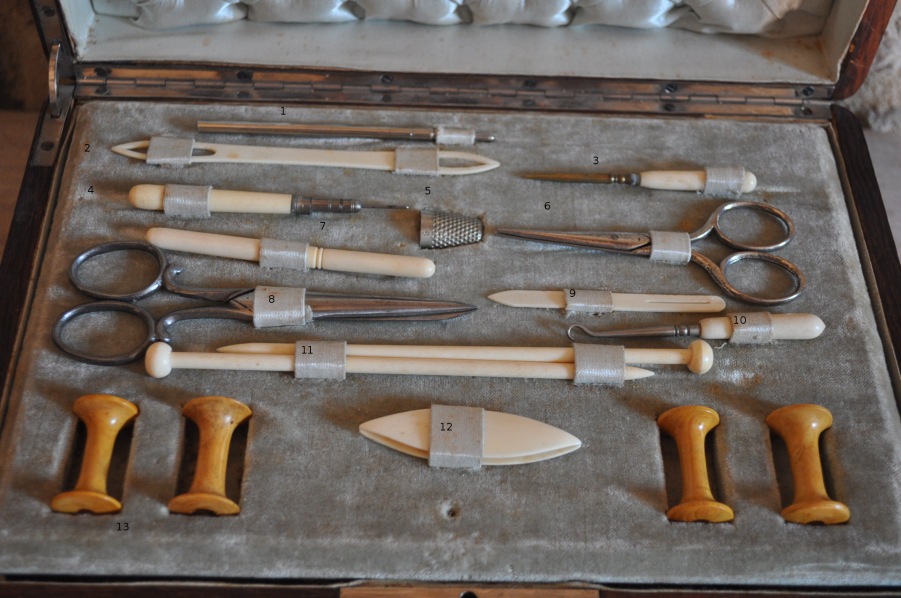 Judging by the amount of lace related items and the fact that, when you lift up the tray, there are some examples of lace inside, I would imagine this belonged to somebody that made lace .

”No shit Sherlock”  I hear you say but there you go.

I hadn’t really thought about that little hole underneath the tatting shuttle but, as somebody pointed out, that would have probably had a little ribbon or hook to make it easier to pull out the tray.

Also – why the mirror?  It had occurred to me that it might be to check one’s appearance but dismissed it as madness.   However, apparently, such madness did exist in days gone by when people didn’t go to the supermarket and drop their kids off at school in their jammes, but refreshed their make up and did their hair in case of unexpected visitors or in case the  husband came home from work early and surprised them in their state of disarray.  If I get unexpected visitors when I’m in a state of disarray I just don’t open the front door.

Also, it has been suggested that this set is from the early 1900s  which is probably not too far off the mark although it could be as late as the 1950s.  Not sure.

Anyway thank you to all who helped me identify those tools – I think we’ve got them all now by a combined sterling effort.

Unless you know different, of course.

This entry was posted on January 12, 2017, 11:19 and is filed under Arts and Crafts, Interesting Vintage Finds. You can follow any responses to this entry through RSS 2.0. You can leave a response, or trackback from your own site.