Just a Couple of Little Projects

While my Mum was visiting I abandoned sewing and my workroom for the much more sociable and garden friendly crochet.

I was prepared.  Having made a fairly simple blanket as a beginner project I thought I’d tackle something a little more complicated and was tempted by the Sunshine and Showers blanket by Janie Crow which is running as a CAL (crochet along) on her blog  here. 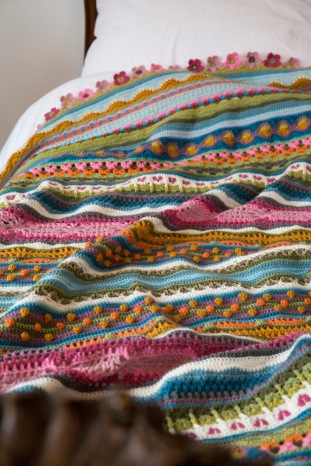 You make two identical sections per month for twelve months and then join some sections together and you should end up with the above which looks hideously complicated to me.   Look! there are flowers and little hearts and bobbles and things – but I’m hoping to learn as I go along.  There are two versions – one in a merino mix yarn and the one I’m doing which is in Stylecraft Special DK which comes in some splendiferous colours.  I decided to go with the same colours used in the CAL because there will be less room for confusion and I like them anyway.

Now I have to make a second,  identical one and wait for June’s section to be released when, apparently,  I will learn ‘puff’ stitches – I can hardly wait and, although I know that sounds sarcastic, there is a an element of truth in it.  Simple pleasures……..

I had forgotten how much I hate doing long foundation chains  😦

A glutton for punishment, however, and wanting something easier to do in between waiting for the sections to be released, I bought the yarn to make Lucy at Attic 24’s Hydrangea Blanket for which the pattern is on her blog here

At first glance I wondered why these colours were anything to do with hydrangeas but Lucy explains that she watched how the blooms changed colour over time and has some great photos on her blog (one of which below) showing how right she is. 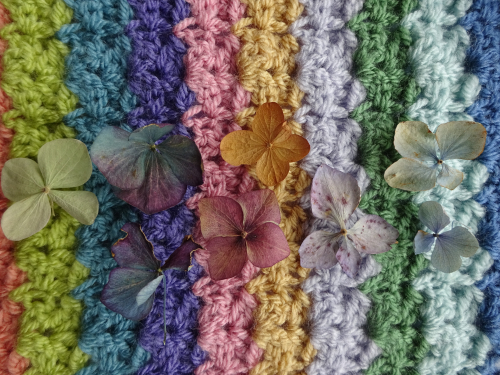 Wool Warehouse stocks the kits for Attic 24 patterns so I went ahead and sent for them here and began the repetitive, yet addictive, stitch which forms a really nice dense texture.

I like to look at the balls of yarn in their basket.  Such a range of colours is hard to resist and, although I avoid 100% acrylic in knitting projects that I am going to wear, in my house a blanket needs to be put in a washing machine.  Also, after struggling with a cotton yarn that splits as soon as you look at it in my fusion quilt (squares of fabric with a crochet border) this is an absolute pleasure to crochet with.  I’m hooked!  Sorry, not sorry. 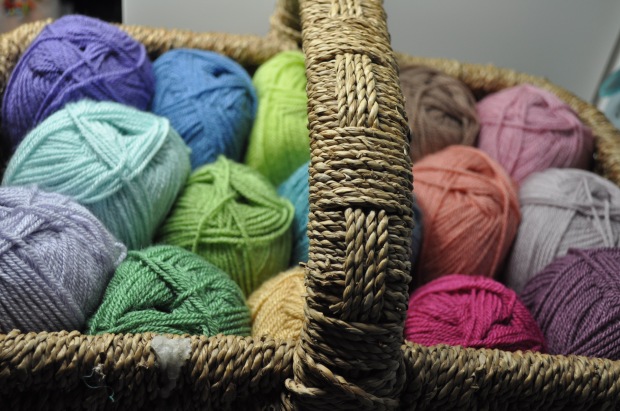 This is where I am with it so far but progress might slow down a little now Mum has gone back to the U.K. and I am drawn back to the sewing room.

Just in case I wasn’t already knee deep in crochet, I made a hat.  For an egg.  Well, why wouldn’t you?

Actually, it’s not really for an egg, although it could be,  it’s for a bottle.  I can’t remember where I saw it mentioned first but Innocent Drinks are, once again, asking for little knitted (or crochet) hats to put on the top of their smoothie bottles in the supermarket and, for each hat-wearing bottle sold, they donate 25pence to Age UK.  Since 2003 ,  6 million hats have been knitted which has helped raise over £1.9m and increase awareness of the great work done by charities like Age UK.

On a selfish note, it helps me improve my crochet ‘in the round’.

You can read about it here if you fancy putting your needles (or hook) to good use  – the deadline this year is 31st July.

The fabric haul from my Walthamstow Market visit has arrived with Mr. T. from the U.K.  He has got a ‘pulled’ shoulder muscle from the weight.  I blame it on the black flecked jersey on the bottom there which is heavy and there is 3m of it.

I’ve given him some Ibuprofen, treated the affected shoulder with a cursory massage and told him to buy a cabin bag with wheels.

Close ups and potential uses for the precious cargo to follow .

This entry was posted on May 21, 2017, 09:43 and is filed under Arts and Crafts, Crochet Projects. You can follow any responses to this entry through RSS 2.0. You can leave a response, or trackback from your own site.