Most of you guessed a hedgehog or pointy nose dog but Bekki and a couple of others guessed right.

But not just any old fox.  He is from the much loved French book ‘The Little Prince‘ by Antoine de Saint-Exupéry (1943)

Below is the way the fox is illustrated in the book – speaking wise words.  ***

In the (excellent) animated film version of 2015/2016 – the rights of which were acquired by Netflix  – there is also a plushie fox which is given to a little girl by ‘the aviator’ who is telling her the story of the Little Prince.

So, the pattern I used, which I bought from Etsy, was based on the soft toy in the film version.  You can find it here should you be tempted.

The instructions were originally in Italian and the translation is a bit ‘wobbly’ in places but the pattern pieces come together wonderfully well, as you can see.

So you can’t really complain can you? 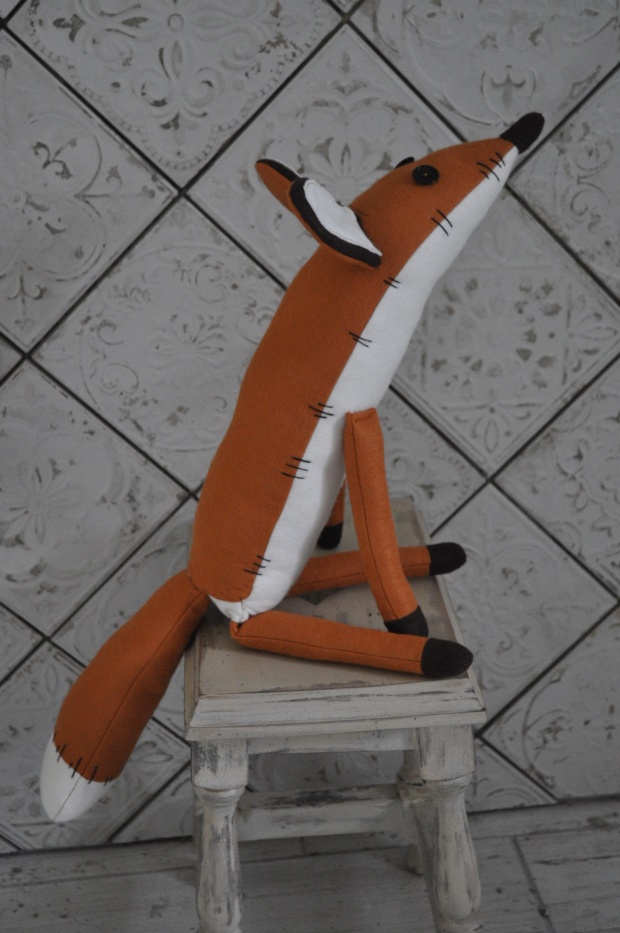 I made him with sheets of a wool blend felt I got from Minerva Crafts which were, by a stroke of luck, on sale at the time.  Lovely to sew with – no fraying, just nice clean seams.

I expect a lot of you will have read the book either in French or English or will definitely have heard of it.  It’s very deep and meaningful and philosophical in true French fashion but the messages are universal.

Personally, I loved the film version which is very respectful of the original novella and, if you can, try to catch it, it’s in English.  Don’t forget the tissues.

It is only with the heart that one can see rightly; what is essential is invisible to the eye.”

*** For me you’re only a little boy just like a hundred thousand other little boys. And I have no need of you. And you have no need of me, either. For you I’m only a fox like a hundred thousand other foxes. But if you tame me, we’ll need each other. You’ll be the only boy in the world for me. I’ll be the only fox in the world for you….”
― Antoine de Saint-Exupéry, The Little Prince

This entry was posted on May 4, 2019, 12:00 and is filed under Arts and Crafts. You can follow any responses to this entry through RSS 2.0. You can skip to the end and leave a response. Pinging is currently not allowed.