Today is SUDEP Action Day – an annual awareness day to shine a light on SUDEP (sudden unexpected death in epilepsy) and other causes of epilepsy-related deaths. 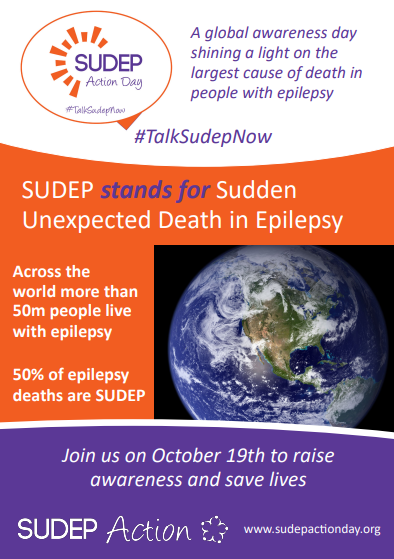 So, hard as I’ve found it to write, it seemed like a good day to explain the reason for my prolonged absence from blogging to those of my readers who don’t know the circumstances and also show my support for the work of SUDEP in the hope it will help somebody else by acknowledging the risks of epilepsy and thus taking informed decisions in managing the condition.

Our youngest daughter – known to some of you as Miss Tialys the Younger – was due to come over last Christmas Eve with her sister to spend Christmas and New Year with us.

Her habit was to phone us every evening around 7 and, when she didn’t phone on the evening of December 23rd I thought it strange as she was excited about Christmas and I expected her to be asking what time we’d arrive to collect her the next day so, when I couldn’t get her to answer the phone, I became so worried I decided to drive over to her flat which is an hour and a half away.

When I arrived and could get no answer by knocking on the door, I let myself in with our spare key and found her collapsed on the floor where she must have been since the morning.  I called the paramedics but it was too late.  The police came, I gave a statement, they drove me home. She was 26.

The post mortem was inconclusive but, as there were no suspicious circumstances, an interim death certificate was issued so we could go ahead with her cremation.  However, they needed to do further investigations on her brain and, after six months, we had an official cause of death which is ‘sudden unexplained death in epilepsy’ also known as SUDEP.

She was on medication after she had a seizure in 2020, while her father and I were still in France (on lockdown) and her sister had taken her to hospital in the UK where they kept her in for almost a week and prescribed the anti seizure meds on her release.  So, in a way, the post mortem result was a relief because it was sort of what we anticipated and not something more sinister but also because we take comfort from thinking she wouldn’t have known much about it.  However, it’s also a bit surprising because although she was on anti-seizure medication, she wasn’t what I think of as being ‘properly’ epileptic – whatever that is.

She was on the autistic spectrum and I worry that, on certain occasions where she told us she’d felt ‘weird’ or had episodes where she couldn’t speak, these might well have been petit mal seizures rather than the autistic ‘meltdowns’ we put them down to.

None of this speculation changes the fact that she has gone from our lives at the age of 26 and that we are still coming to terms with it and nothing will ever be the same again.

I registered her death with SUDEP Action and filled in their questionnaire to help with their research into this fairly uncommon cause of death and, hopefully, it will help people in the future.

The urge to sew/crochet/knit etc. has only fairly recently come back again – strangely those things were of no help at all to me during the darkest days.  My only salvation was reading – I read so many books that I’ve lost count – but it was the only way I could escape and, still now, when I wake up in the night or early morning and my thoughts won’t let me rest, I reach for a book.

She hated having her photo taken as she got older but I can’t resist putting one of her on here from when she was little and didn’t care.

Please don’t feel as if you have to comment – I know it’s difficult to know what to say.  A ‘like’ will do and will let me know you’ve read it.

This entry was posted on October 19, 2022, 08:00 and is filed under Life in General, Uncategorized. You can follow any responses to this entry through RSS 2.0. You can skip to the end and leave a response. Pinging is currently not allowed.