More Reasons Not to Do The Ironing

I have just received my pattern, from the ultra talented Jodie of RicRac, and now I’m all set to make a bag from selvedges.  Why? is,  I suppose, a not unreasonable question but if you have ever seen her dress or her chair cover made from selvedges you would want to duplicate just a tiny, tiny part of that amazing creativity from the bits that you would normally cut from the rest of the fabric and  throw in the bin. (see my post about RicRac for enlightenment).  I have been obsessively saving all my selvedges since I first realised that you could actually use them for something but, alas, I have spotted on the pattern that you are supposed to leave at least 1/4″ of the rest of the fabric attached to the selvedge.  oops!  Oh well, if I haven’t got enough, I’ll just carry on  collecting until I have.  I can always carry on using the ones that are too skinny for tying up gifts and packages instead of ribbon – they look surprisingly good.

Meanwhile, I have been having a bit of a 70s retrospective.  I was never a punk (I couldn’t stand the music then) but my husband was and, over the years, I have mellowed towards the Sex Pistols, the Ruts, the Dead Kennedys and the Buzzcocks and occasionally find myself actually liking some of it.  I was inspired to make (another) owl in Punkish mode – I would have preferred a red mohican but I had this pink stuff so he’s a bit of a gentle punk – less Sid Vicious, more Kevin Kindly, still you get the idea. 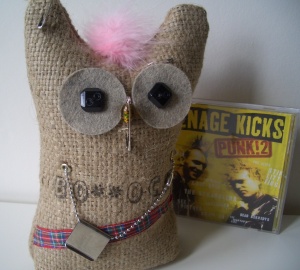