Posts Tagged after all

Occasionally I am inspired by my blogging friends who set themselves challenges and goals for the day, the week or even the whole year ahead.

But not for long.

This ‘to do’ list scrawled on a bit of torn out paper is about as organised as I get.

However, I have managed to work through some of those (although it is Thursday and I wrote it on Monday).  I’ve phoned my Mum and my friend Maureen although she isn’t crossed out yet.

I’ve booked a restaurant for lunch tomorrow with some friends.

The ‘Box’ entry is because the customer who ordered a little etui box like this ……..

…..liked it so much she wanted a sewing box in the same fabric.

I didn’t have enough blue bunnies so she settle on pink which I hope she will like.

I wanted to practise some freehand machine embroidery so I made her this card using a piece of the fabric from the interior of the sewing box. 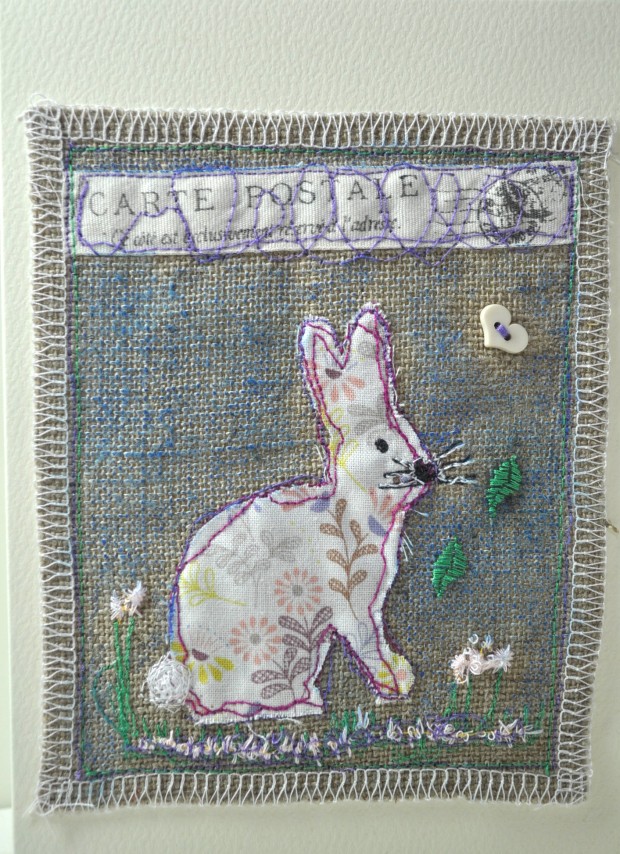 The ‘crochet’ entry is because I’m running out of time to complete my two identical sections of Jane Crow’s ‘Sunshine and Showers’ crochet along before the next section is released.

So I’ve managed one and now have to do an identical one.

The lurid greenish colour in the background is a yoga mat.  Obviously!

I’m worried about wavy edges because there are so many different stitches and colour changes and I’m thinking I’m no expert yet so my tension may well wander so I’m blocking it as I go along – hence the yoga mat.

I  don’t think it’s too bad but I need to have a clean slate before next month’s section is released as some Ravelry users who did this last year say they almost gave up at that point.  Even the designer confesses it to being difficult but rewarding.  Ooer.  Stand by for a row of individual flowers on top of what I’ve already done.  Maybe.

I’ve crossed out ‘Collars’ but really I should leave them on there because, since tagging my Scottie Dog collars as Westies I have been inundated with orders from a French Westie fan club on Facebook.  I know they are a little square jawed for Westies but then most Scotties are black so I consider it to be a generic design.

Talking of dogs, mine are driving me to distraction at the moment.  As happened last year, they graze like cattle on the fallen plums and figs in the garden and, also like cattle, deposit the results in great pancakes.  Then they scent our evenings with their gaseous offerings.  I’ve tried clearing up the fruit as it falls but we have so many trees that it’s a virtually impossible task and the slightest breeze (or dog nudging at the lower branches) releases another load.

It’s just as well really because, knowing my love of German Shepherd type dogs my friend sent me this photo of a pup that has recently arrived at the dog rescue.

Then, when I foolishly investigated further, I saw this handsome fella

I’ve also heard, separately, of two young Pyreneen Mountain dogs who need a new home.  Mr. T says it must be a sign but he’s not here all the time so I’m just going to go out in the garden and shovel up some more fallen fruit – both undigested and digested – to remind me that three dogs is already plenty.

I haven’t forgotten the  ‘hatboxes’ entry and must do something with the hatbox quilt blocks before the end of the month as that is supposed to be a monthly ‘challenge’.  See, I do try.

The ‘Conservatory’ entry is sort of housework related so we won’t worry about that –  ‘after all, tomorrow is another day’