Call the (Quilt) Police There’s A Mad (Wo)Man Around

With apologies to the Pet Shop Boys for sort of ripping off their lyrics for my title, I hope you’re all enjoying a lovely long Easter/Spring break and doing whatever it is you like to do at such times.

Last time we had a chat I asked you for help in deciding on a border for the Friendship Braids quilt and then mostly ignored what everybody said anyway.  The Quilt Police will not be happy but I decided to dig out a vintage sheet I had actually bought a couple of years ago with the backing for this quilt in mind and use it for the border. 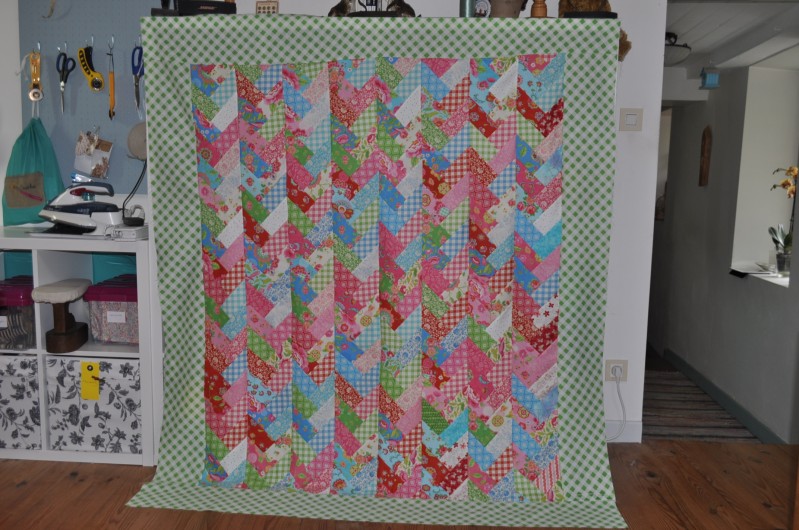 Tell me I was wrong.

I’m not normally a ‘green’ lover but I think it makes it look very fresh.

It is quite a low thread count I believe but, just to be sure, I washed it, made a sandwich with a square of quilting cotton, wadding and sheet and had a go on the machine.  I didn’t have any problems with tension or thread knotting or snapping or anything and I certainly won’t be doing any quilting this close together so I’m going to go ahead and if I’m arrested and given a long sentence it will just give me the opportunity to sew mini hexies together, learn to love cross stitch, do a degree in psychology and concentrate on trying to make an orange jumpsuit work with my complexion – although that would only be if I got arrested by the United States Quilt Police which is a possibility as I think they are the most rigorous.

As I’m in confession mode, I must offer as evidence to be taken into consideration M’lud that, even worse than it being a sheet, there might be a touch of ‘poly’ in with the cotton as there’s a vague chemical smell when I iron it.

With this in mind, I decided not to go the whole hog and use it for the backing as well.  As luck would have it, I had just dug a duvet cover out of the clean laundry basket that has been subjected to numerous treatments and washes in an attempt to remove some oil (I think it was some sort of body oil) that Mlle Tialys the elder had managed to spill on it some time ago.  There was a patch of oil that refused to come out and, if anything, appeared to increase in oiliness as time went by.  I cut out the patch, harvested the top Cath Kidston like floral fabric for future projects and pondered using the checkered side for the back as it is serendipitously the right colours and size.  (Woohoo, I got to use ‘serendipitously’ – and again!)

I did make another sandwich, it worked fine, it is now cut to size for assembly so it’s too late to tell me if you don’t think it’s a good idea and, anyway, you know I don’t always listen don’t you.  It is, at least, 100% cotton.

I rest my case.

I did have a vague idea about giving this to my Mum when I’d finished it but I think it might have too much green in it now for her liking.  She has a thing about green and, as with most of her superstitions, has passed them on to me.   Even though I don’t really count myself as a particularly superstitious person, I like to err on the side of caution.  I don’t put new shoes on the kitchen table, I don’t bring lilacs into the house, I don’t tell Friday’s dreams on a Saturday in case they come true, and other such tosh.  However, for years I believed the colour green to be unlucky until it turned out that her basis for believing that was that her own mother had once lost a purse while wearing a green coat.  Sometimes I worry.

So she will be getting my first ever crocheted blanket instead which, as far as I know, has no bad luck associated with it and will go very nicely on her sofa and across her knees if she gets a bit chilly 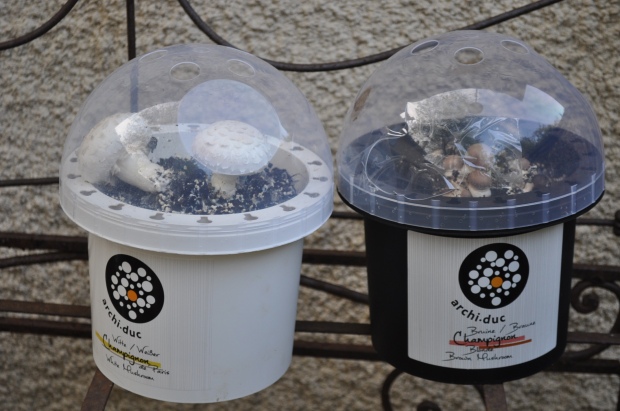 Flushed with success after harvesting 450g of gorgeous tasting brown mushrooms from the pot on the right and watching the new babies grow (you can just see them if you squint) – I spotted a pot for white mushrooms (or champignons de Paris as they are called here) and thought I’d give them a go too.  It’s quite amazing how much better they taste when plucked from their very own compost just before you cook them.  I’m a convert and our earth floor wine cellar – which never gets used to store wine as we drink it too quickly – may well be put into use as a mushroom growing room in the near future.

I found this little stool in the junk shop last week and, as with much vintage French furniture, it was covered in a very dark brown thick varnish. Yuk.  I forgot to take a ‘before’ photo but it was a flat, uninteresting, no grain showing, almost black, dark brown. Mr. T. had a go with the varnish remover and the sander and got it down to this. 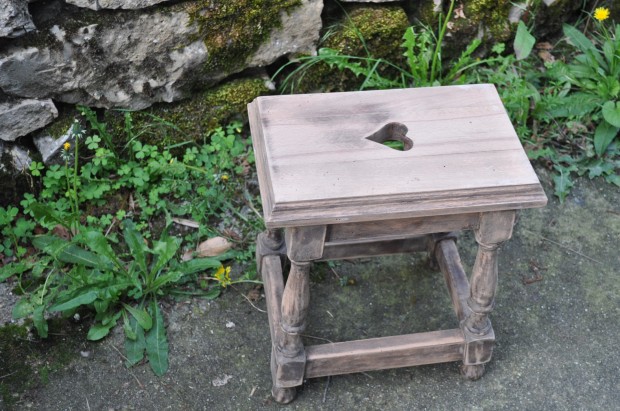 I’m going to treat it with some woodworm killer – just in case – and, if all of the varnish has gone I want to use a white wax on it but, if not, I will probably use a chalk paint and then distress and wax it.

Off to baste a quilt before somebody stops me.