Posted by tialys in Garden and Wild Life on April 5, 2021

This time last year we were still in France and had got as far as house hunting online for our move back to England.  For various reasons, some related to Mr. Tialys’s work commitments which have only became apparent since, it appears we made the move at the right time. 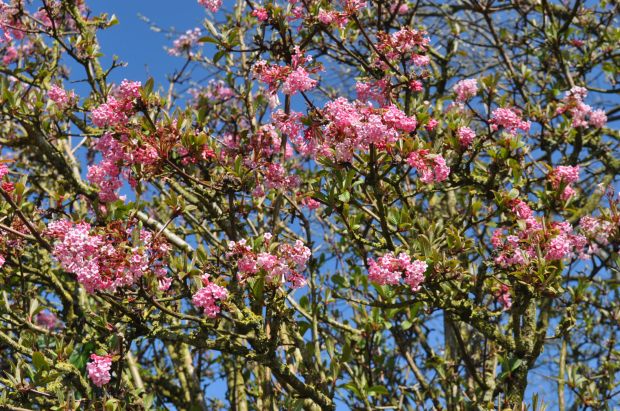 So, Easter in England for the first time in sixteen years was a lovely warm and sunny surprise and  I was sufficiently moved to leave my sewing room and go outside to help the gardener (aka Mr. Tialys) with some outside renovations.

You might remember me telling you that the previous owners, in a bid to outwit the ground elder, had buried untold quantities of black plastic – some ‘proper’ stuff, some pond liner and some old plastic compost sacks!! – all pinned down with hundreds of plastic pegs.  For the most part, this was all covered with gravel and sometimes pieces of wood.  In some places although, to be fair, mostly those places not planted up decoratively, there are old house bricks, spare ceramic tiles and paving slabs.

This, for instance, is part of the bank above the fish pond. 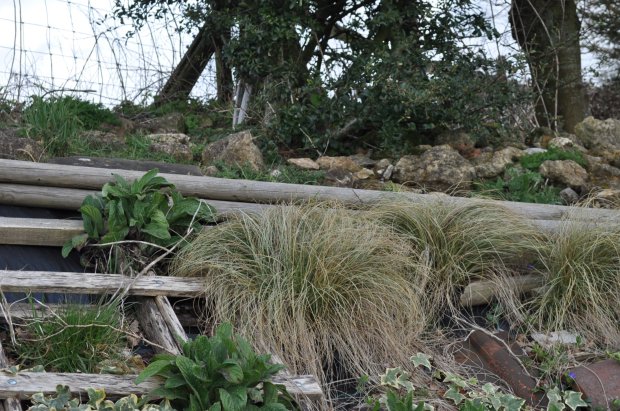 Mr. T. is on a mission to remove most of the plastic and gravel and says he’d rather deal with the weeds than see the earth being choked with the plastic, some of which is breaking up into the soil.   Here he is revealing the soil on the bank.  Ground elder roots – and there are plenty – are being drowned or burnt.

Just the start of the eventually huge pile of plastic and the wooden planks, etc. that were laid haphazardly on top, for some reason best known to the previous occupants. 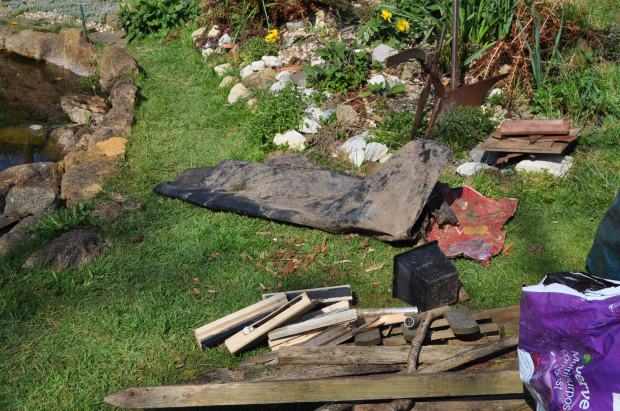 Even this old sawhorse had been pressed into service, folded flat and laid on top of the bank – now rescued and ready to be used for its original purpose. 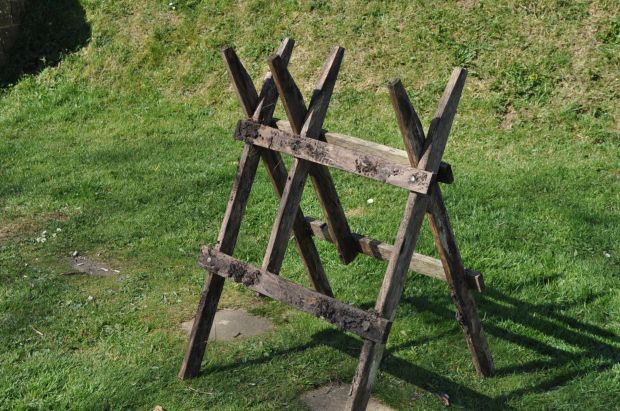 Stan and Flo were helping by staring plaintively until one of us would relent and throw the frisbee for them.

Now this one already looks as if he’s been atop that wall for years.

This one has swapped the side of a swimming pool in S.W. France for a fish pond in S.W. England and, personally, I think he looks happier in a gargoylish sort of way, unlike Mr. T. who nearly did himself a damage by carrying it there from where the removal men had dumped him up the other end of the garden.

This area to the side of the driveway gates  was also covered in plastic and gravel and is now cleared and ready to be planted up maybe with rose bushes. 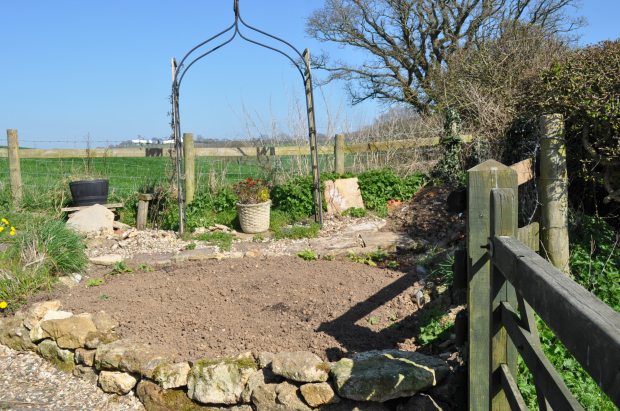 The greenhouse is very much not my domain – I am only invited in at H.M. the Gardener’s pleasure to ooh and aah at the various things in pots that he’s sewn from seed. 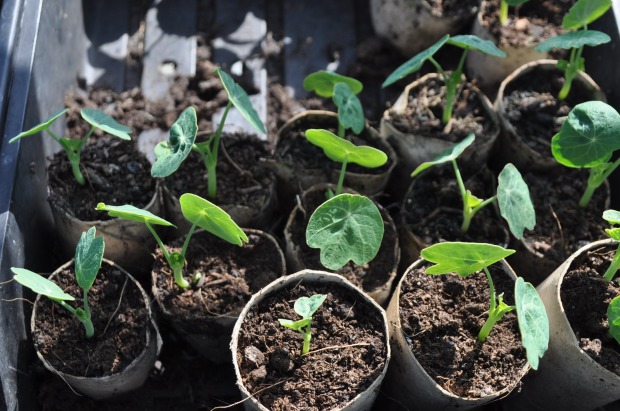 I like nasturtiums.  They remind me of a time long, long ago (or the Stone Age as one of my daughters calls it) at primary school when they used to give (sell?) us a  little a packet of candytuft or nasturtium seeds to take home and plant in a pot and take it back to school at a set date where, if you had been successful, you would get a pretty coloured certificate.  I never got one.  We lived in a first floor flat in London and neither of my parents were gardeners of any description.

Just a little memory I thought I’d share with you there for no good reason. 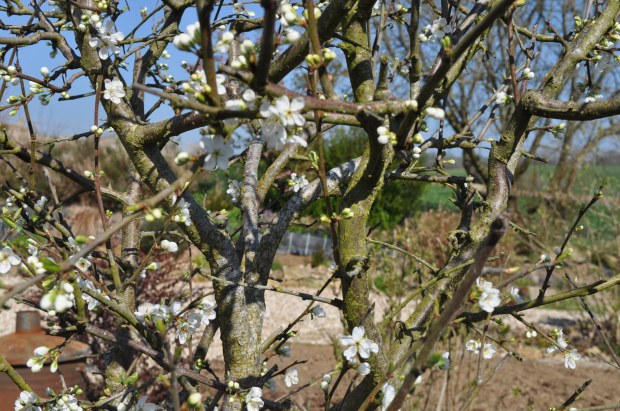 We’re not sure what fruit tree this is – any ideas?

So, today has clouded over a little.  Maybe I’ll get my bathroom shelves put up but I’m not counting on it.

I might get the drill out, wave it about inexpertly and ask where the rawlplugs are – something that has worked a treat in the past 😉

After last month’s exciting dog feeder in a kitchen drawer, I’ve yet again got to hand over to Mr. Tialys for the March edition of Scraphappy where new things are made from scraps.

Now that he has a more manageable garden to  oversee, he’s rarely out of it when he’s not in endless Zoom meetings for work.  He’s always loved a good compost bin and, despite the fact we now have a fraction of the garden waste we had at the French house, he apparently needs a triple one to go alongside the plastic ones left behind by the previous owners.

Is it possible to have a compost bin stash?

Anyway, you might remember that the previous gardener had spread black plastic mulch pretty much all over the place and covered it with gravel to ward off  the dreaded ground elder and, along with some strange garden ‘ornaments’, scattered quite a lot of random pieces of wood about the place too.

All this was grist to the compost bin building mill.  Apart from the garden ornaments that is.

Well, shortly afterwards I stumbled across his evil twin and, a few weeks after that, as if they were breeding during the night in some sort of B movie horror, a third one.

Hopefully that will be the last of them.

So, as well as the odd wooden pallet….

and other planks in various stages of dilapidation, all used for cross pieces,……..

there was what looked like the makings of a wooden pergola stacked behind the garage.

With unseemly haste, and without consultation, these were mercilessly sawn into the requisite sizes to make the main supports for the new bins.

Then the leftover netting from making the garden dog proof (hopefully!) formed the back and sides with some of the ubiquitous black plastic stapled over that to create a large bin in three sections.

The fronts have been left open for ease of ‘turning over’ – a technical gardening term that I believe means forking all the gunk over once in a while to mix it all in.  Apparently, some sort of Heath Robinson adjustable frontage will be constructed that will be moved up as the amount of composting material grows.

Speaking of which, we have much less grass now which is ,apparently, a very important addition to compost heaps.  This is mostly due to having less land than before but also to having a rather large garden pond in the middle of what would be the lawn.  So, Mr. Tialys has gone begging for grass clippings from anybody nearby willing to empty theirs into a bag for him.

But, that’s not the worst of it.  The other day I spotted a large sack on our driveway and went to investigate.  In a gesture that might be considered abuse in some neighbourhoods, it contained a significant amount of fresh horse poo.  Mr. T. was almost as excited as the dogs were when he saw it but did complain it ‘wasn’t well rotted enough really’ although he used it anyway.

Ew! Is it any wonder I leave the gardening to him?

So here, in the furthest corner of our garden (thankfully), is the compost bin stash in all its glory made from scrap wood, scrap plastic, leftover netting and scrap poo or, as I prefer to call it, horse scrap 🤣.

Scraphappy Day is organised by Kate & Gun for anybody who wants to make new things from scraps of any kind – doesn’t have to be fabric or yarn.  Here’s a list of participants – both regular and occasional – if you want to have a look at the sort of things you can do with scraps.