CONGRATULATIONS TO ANNIE K. WHO, BEING THE 48TH PERSON TO COMMENT, WAS PICKED BY RANDOM.ORG.

Thank you to everybody who entered and, if you didn’t win but would like to try making one of my boxes, the PDF tutorial is available to buy here.

Doesn’t everybody like the thrill of the chase, the excitement of wondering whether you will win, the thought you might actually get something for nothing?  I do. 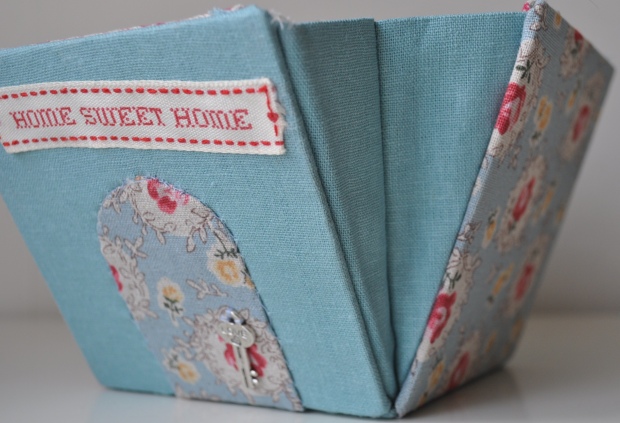 One of my readers alerted me to SewMamaSew’s  Giveaway Day which happens twice a year. Giveaway Day is a  HUGE event they coordinate where everyone with a shop or blog can give something away and, because it has been so successful, this event is going to last 5 days instead of one.   I’ve not only decided to go and scout round everybody else’s blogs  to see what they are up and to see  if I can actually win something for a change but I have also decided to join in and offer a giveaway of my own.

Not for the lazy or faint hearted amongst you, I am giving away one of the PDF tutorial patterns for my own design fabric covered étui box.  The tutorial has lots of photographs and, hopefully, you will end up with a neat little treasure box, memory box, trinket box or sewing box like the above, or this – 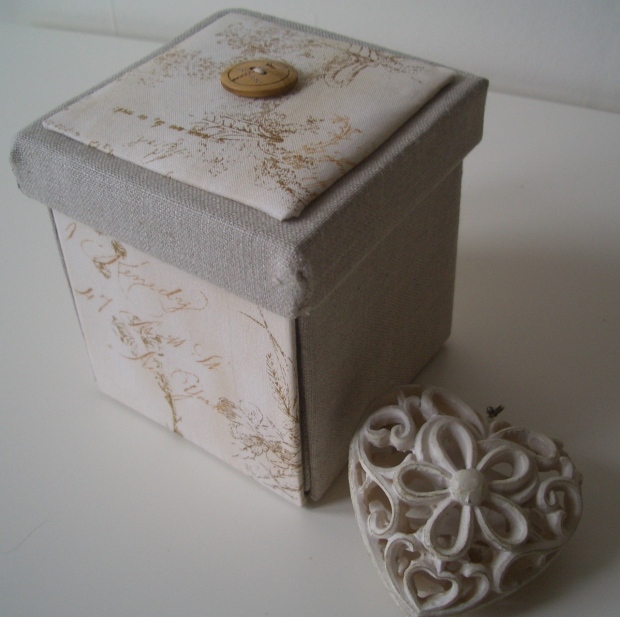 Intermediate sewing skills are needed – for neatness! – and the wish to get a little bit icky and sticky as there is gluing involved.

If you want a chance to win a copy of my tutorial sent direct to your email address, wherever you are in the world,  just leave a comment below – polite and/or amusing would be great but not obligatory – and I will draw the winner on May 25th as per the instructions from SewMamaSew – although 17h pacific time is 01h in the morning here in France so I might leave it until I get up on the morning of the 26th if you don’t mind.

If you want to participate in the May Giveaway Day by entering other giveaways or by offering something on your own blog please click here for details. 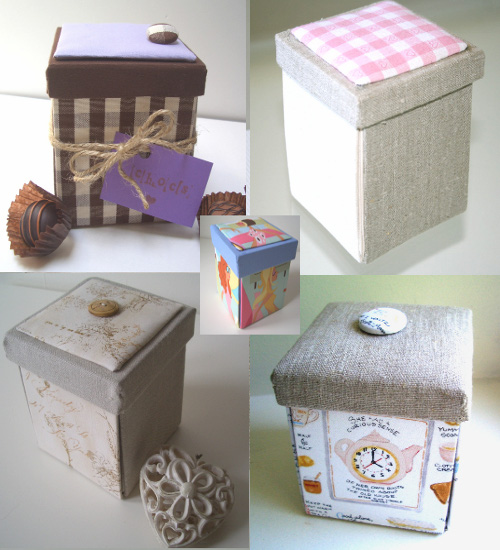 Well, I know I’m a day late announcing the winner but who’s counting – only 4 of you apparently!!

…..a bit blurry but it definitely says ‘Tolmema’ who, I know from her own blog, has a little daughter she calls ‘Little Foot’, hence the title.

Well done and I will email you (if the email on your blog profile is the correct one) and you can give me your address.  I think you are in the U.S. so I’ll get Scott’s little case packed ready for his long journey.

Scott needs a home.  He is a creation of mine, born of necessity and I have no more use of him.  Cruel, I know, but there is only so much space in La Maison Tialys.

When we first started our ‘breakaway’ sewing group, I was under pressure to come up with a project. I’d just seen a tutorial to make a penguin, suggested it to the others and off we went.  Now, he’s not the normal sort of thing I make for my shop and, in any case, you can’t make these to sell – it is written.  So now, like Dr. Frankenstein, I am rejecting my creation and, because I am not heartless and don’t want to consign him to wandering the wastelands, I am offering him to you.

He isn’t perfect by any means – after all, most of the time I was chatting (badly, in French) and using an unfamiliar machine – but he is free to a good home and he has a certain chilly charm.  If you want to give him to a child, it should be alright but you might want to snip his little button eyes off first – ouch!

By the way, despite looking gigantinormous in the photo, he is only about 25cm (9-10 inches) tall so you won’t have to move anybody out of the spare bedroom or anything.

Anyway, should you wish Scott to come and live at your house, just leave a comment below and I’ll have a ‘pick out of the hat’ ceremony, let’s say on Sunday, 25th March.  Make sure I know how to get hold of you as last time I had a giveaway the winner disappeared into cyberspace and I had to give the prize to the runner up.

By the way – if you want to make one yourself – you can find the free tutorial here http://www.purlbee.com/purl-bee-penguin/

(p.s. Hee hee – I thought Scott (as in Scott of the Antarctic) was a good name but, as I typed in the title, I realised that was a better pun!  Sorry, just thinking out loud and finding myself amusing)

Posted by tialys in Uncategorized on December 6, 2011

Thank you for all who entered my festive giveaway competition(ish).  Some great ideas were received as to how to use my giant turquoise glass insulator and I will be testing some of them out after the Christmas festivities are over.   But, for now, I’ve decided to go all girly and festoon it with fairy lights which will make a nice subtle side lamp and look pretty with all the other Christmas decorations.

Madamoiselle Tialys was at home this lunchtime so I asked her to pick a winner, not from a hat, but from the very container that is the prize. 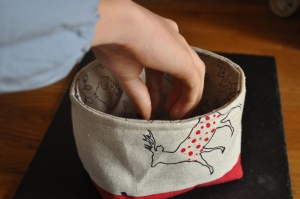 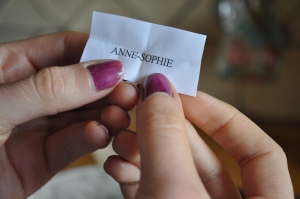 I have to say that Al at Houdini gave me so many suggestions – it was an entry above and beyond the call of duty – that I would like to offer him a consolation prize so, Al, send me your address via email or Etsy convo and I’ll get it off to you.

Thanks to everybody else who entered – it’s nice to know I’m not wittering on into a vacuum – I do enough of that when I’m not blogging!

Posted by tialys in Arts and Crafts, Interesting Vintage Finds on November 18, 2011

As the season of goodwill approaches I’ve decided to do a little giveaway competition for my regular readers and anybody else who cares to enter.  However, as I have Scrooge like tendencies, I thought I’d make you work a little bit for the prize which is one of my little fabric storage tubs in holiday mood, a Reindeer Tubby, just like this

What do you have to do to win this useful little piece of eye candy for your home this festive season?  Simple, you just have to come up with an idea for a use for one of my more obscure vintage finds so that Mr. Tialys doesn’t make me put it in the bin.

It is an old insulator from a telegraph pole in France.  I have lusted after ones from the U.S. before on Etsy but, because they are heavy, the shipping was a bit of a deterrant.  However, the ones I’ve seen are around the size that you would stand a tea-light in whereas this one is massive.  I had to buy it though as the glass is a lovely turquoise colour, it is free standing, it is a great shape and because it was very cheap.

Any ideas?  Standing on it’s rounded end, it measures 7 inches high and the bowl shape that is on top is 6.5 inches in diameter.  The glass is very thick and the whole thing is heavy.

Please save the object from a shattering end by suggesting a good use for it and win one of my fabulous fabric tubbies at the same time.

You have until 5th December to make a suggestion or even just a comment will do if you can’t think of anything – that’s how festively generous I’m feeling.   On the 6th December the winner will be selected the old fashioned way with all entries being put in a hat and one name pulled out by a disinterested party (i.e. any one of my family!).    All welcome – I will ship the prize worldwide.

Posted by tialys in Arts and Crafts on September 10, 2009

I had some great suggestions for new etui boxes from Dionne’s followers on her blog and I chose Yesim from Turkey as the winner.  She suggested a box for the office with little emergency items in, such as spare tights, gum, painkillers, etc. and this gave rise to my  ‘9-5 Etui Box’ .   Yesim chose the ‘Baby Girl Etui Box’ as her prize as she has a relative just about to have a baby – I hope she likes it!

Some of the other suggestions, I have also made use of.  I have already made tea boxes but had been meaning to make a coffee one for a while – just needed to find the right fabric which I did recently when I went to Brighton.  I also wanted to make one using hand-stamped text and which might be suitable for a man. 'Why Don't You Write Me A Letter?'

Anyway, thanks for all the suggestions – any more gratefully received!  I feel a ‘Chill Out’ one coming on with relaxing stuff like candles, herbal tea, etc.