Scraphappy and a Half July

Posted by tialys in Arts and Crafts, Crochet Projects, Miscellaneous Crafts on July 15, 2020

It’s the 15th of the month again and time to talk about using scraps instead of throwing them away or storing them in forgotten corners. 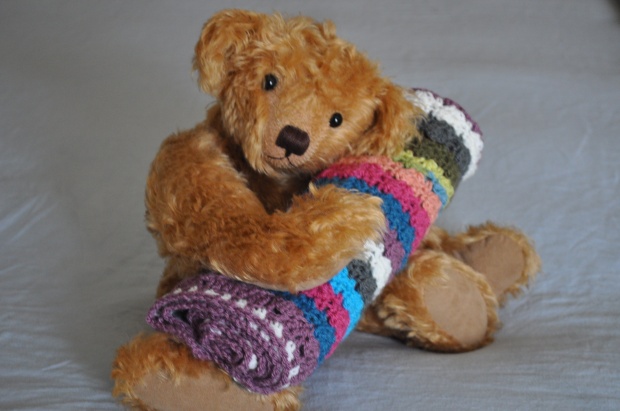 I read on Facebook that a woman locally to me here in France is sending off parcels to Samos in Greece containing things for newborns.  She asked if any knitters (or crocheters) could make small blankets.

I immediately thought of the leftover yarn I used for my large Attic24 Hydrangea Blanket – in the background above – which would be perfect for a miniature version. 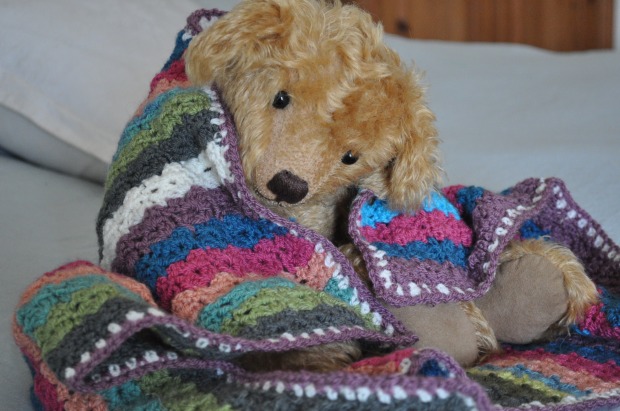 Big enough to wrap a newborn in.

So that was my whole scrappy project this month but I thought I’d include a half size one too.  Half size because it was really spare, long standing stash stuff rather than scraps I used.  Although, the project could be made using scraps if you had some fairly big ones.

My lovely bath/shower cap had gone mouldy so on a trip to the beautiful city of Carcassonne the other day with a friend, I searched everywhere for a new one.  Not a one could I find, not even a boring plain, thin plastic one.  So, undeterred, I came home and made my own.

I used one of my large wire hoops (bought to house crochet mandalas or similar) to draw a circle on a layer of fabric and a layer of some water resistant fabric given to me years ago for lining wash bags or similar. 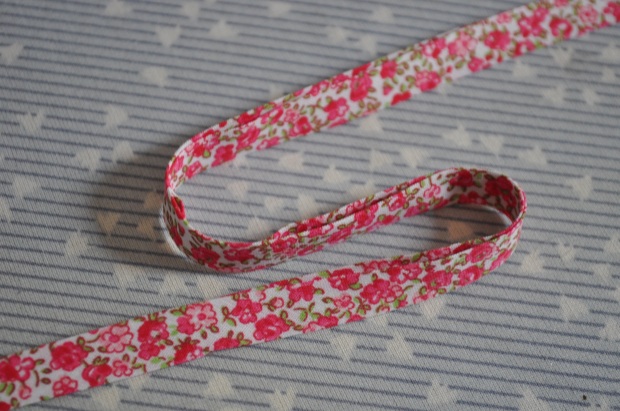 I unearthed the end of a roll of ready made binding and sewed it on around the circle.

Then used another odd piece to make a casing for the elastic.

I sewed the casing on two inches inside the diameter in order to achieve a bit of frou frou. 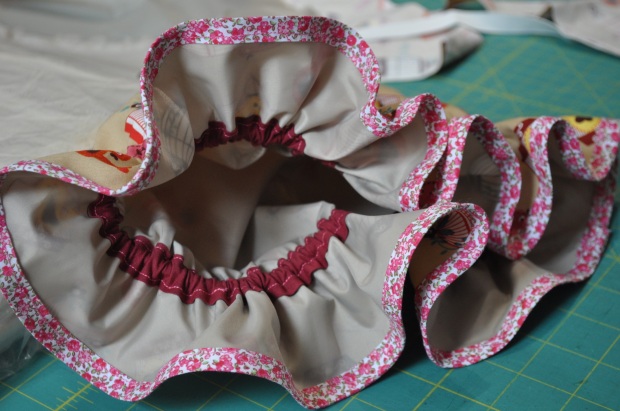 It has yet to be tested under the shower for water resistance but I’m quite pleased with it. (Sorry it was only half scrappy).

(p.s. I’ve not been overly visible on my own blog recently owing to upheavals in daily life – nothing bad unless you count probably moving from my beautiful big house in the foothills of the French Pyrenées with 2.5 acres, back to the U.K. where we’ll be lucky to get something with a garden big enough to swing one of our cats 🙀.  Anyway, I have been reading everybody’s blogs even though I might have only had time to press ‘like’ now and then  – just saying.)

Scraphappy Day is organised by Kate & Gun for anybody who wants to make new things from scraps of any kind – doesn’t have to be fabric or yarn.  Here’s a list of participants – both regular and occasional – if you want to have a look at the sort of things you can do with scraps.

I think I chose the hottest day of the year so far to go and walk some dogs at the dog shelter at Carcassonne yesterday.  At first, they thought it might be too hot for the dogs to go out but, a tiny breeze sprung up and it was decided that it would be O.K. as long as we didn’t go too far.

We tested out a dog’s tolerance of cats by taking in him in the cat house to see how he got on.   Filou, as the little dog in question is called,  didn’t seem bothered at all and the cats seem to sense this as several were rubbing themselves against him and purring and generally being chilled as only cats can be, even in 30 degrees or more. 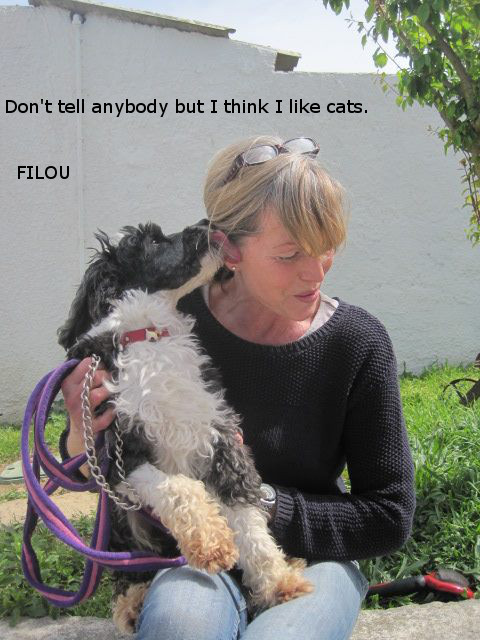 I took my camera and, because I am in ‘dog botherer’ mode at the moment, as always after a visit to the kennels, you can read more about the dogs I’ve featured by clicking  on the photos. 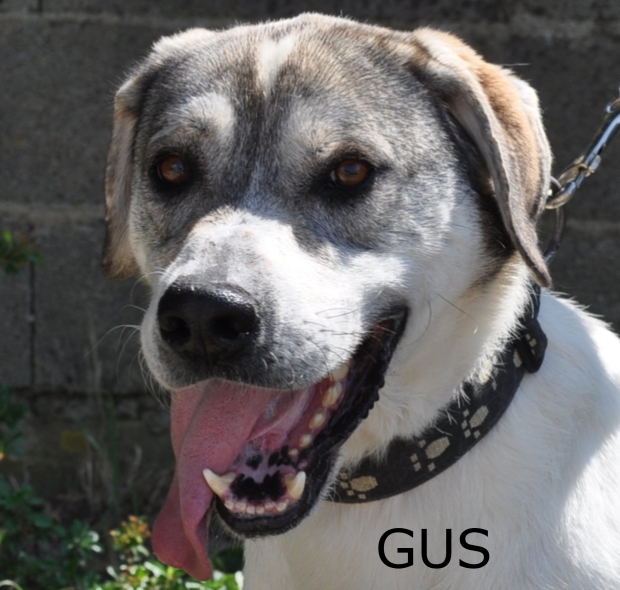 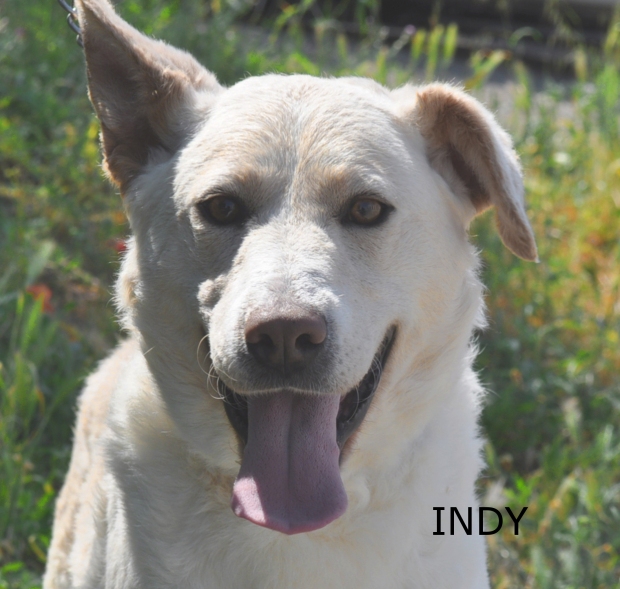 I just love those ears. 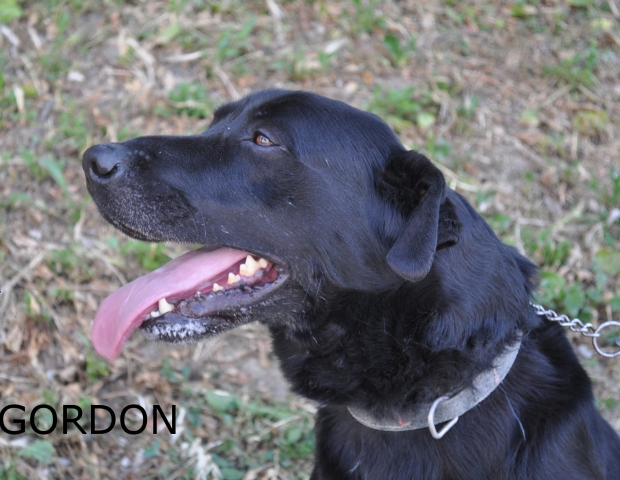 Gorgeous Gordon who is at a disadvantage here in France because they tend not to like black dogs.

Some were just too shy to come out of their kennels

and some weren’t shy at all! 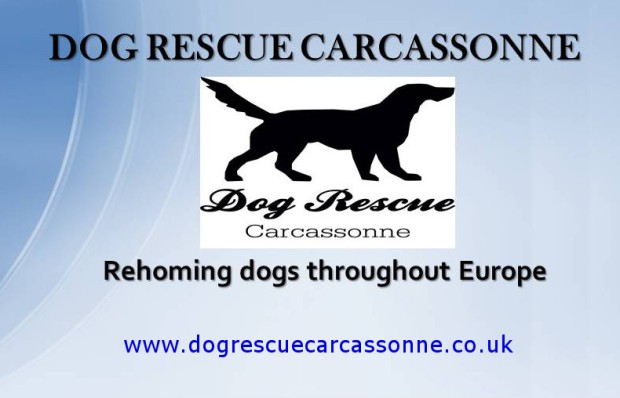 Normal (sewing, crafting, knitting and general musings) service will be resumed shortly but thanks for reading and for looking at my photos.

Dressing Up Dogs for Money

Posted by tialys in Arts and Crafts, Pets & Problems on November 7, 2014

Hot on the heels of pole dancing cats here’s another title to tempt you into reading but, this time, it’s for a good cause so I’ll let the dogs do the talking. 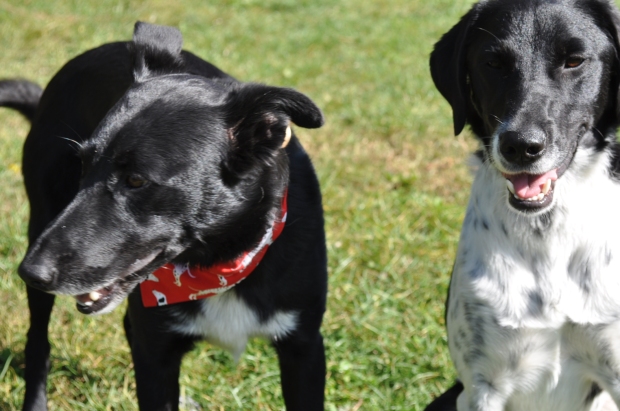 You may know that, before I was living in the lap of luxury and spoilt to death, I was found wandering on the streets and taken to a dog shelter where the Missus and her family came to find me last New Year’s Day.  That’s Stan on the left and he didn’t get as far as a dog shelter because the Missus found him running in traffic and rescued him herself after the registered owner (he was microchipped) didn’t care to have him back.  Taz is our other brother and it was a similar story with him.  Anyway, the Missus says she can’t possibly adopt  any more animals or she will go crazy and, although I can’t begin to understand why that would be, I know she likes to help raise funds for the S.P.A. (Société Protéctrice des Animaux) in Carcassonne, France and she does this with a group called Dog Rescue Carcassonne.  You can read about some of the work they do here.  Just think, my picture was on there once but I was called Froggy then as they thought the way I sat with my back legs sticking out made me look like a frog.  As if!

The Missus likes to sew and she thought she would make some bandanas for stylish dogs, like myself, to wear when we are out to impress.  Stan is wearing a rather fetching red one above but, as you can see, I am naked because, although I am the most beautiful of the Missus’ dogs,  I can’t  possibly stay still long enough to be photographed properly.

So, even though Stan isn’t as gorgeous as me, he will do anything for a tennis ball and, if one is held aloft, he will sit and stare at it forever in the hope that it will eventually be thrown for him.  This is what makes him a good model

These fit the sort of collars that our  size of dogs wear but the Missus says she will even make them for ‘handbag dogs’ whatever that means.

Then she says she will give the profits to the Dog Rescue Carcassonne to help other dogs find homes and also so that the dogs can be sterilized in order to prevent more unwanted dogs being abandoned and  ending up playing with the traffic.

I must say that Stan looks almost handsome and he can’t lose his bandana because his collar threads right through it and, if he rolls in fox poo or goes swimming in the river, the Missus can just wash it in the machine.

That is Stan laughing at the suggestion he might roll in fox poo but I know it’s true because I’ve seen him do it . 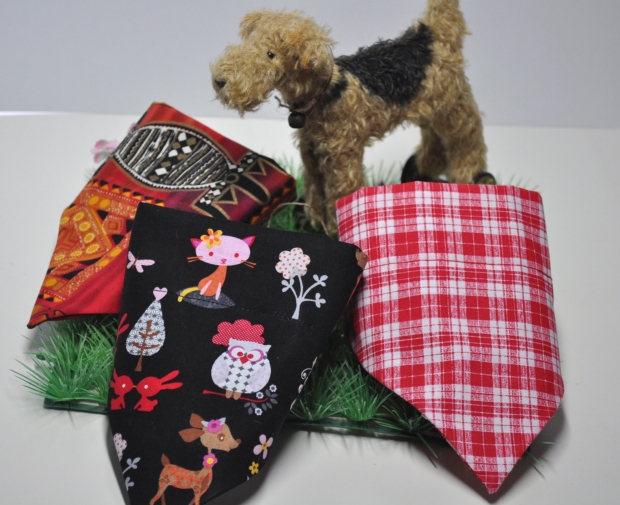 I quite fancy that cute one with the deer and owl and kitten so I hope one of those is for me.  I don’t know who that is in the photo – perhaps it’s one of those handbag dogs.

Bryan Ferry and a Citadel – What’s Not to Like?

Off to see Bryan Ferry tonight in the beautiful city of Carcassonne.

Unfortunately, as seems to happen every year during the time that the Festivale is on, the weather is unpredictable.  This wouldn’t be so bad but the concert  is in the open-air.

Bryan (as I call him) will be alright as the stage is under cover so he will still look cool and like the style icon that he is.  Unfortunately, the rest of us will probably be huddled underneath unflattering hoods and, heaven forfend, cagoules like the ordinary mortals that we are.

Still, it’s worth the risk I reckon.

one hour’s drive away from us and the city of Carcassonne was in beautiful sunshine.  So it was a great concert and Bryan didn’t have to see me in my cagoule.

The old city of Carcassonne never fails to make me catch my breath when it first comes into view – it’s just the sort of place you imagine in fairy tales. 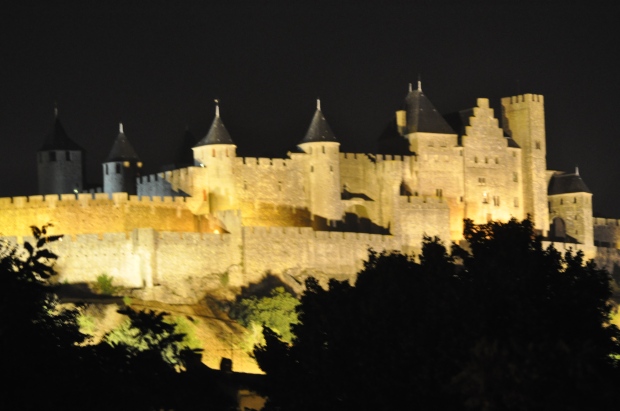 Throughout  July they have a festival with lots of different concerts, often with very big names.  A couple of years ago we saw Diana Ross perform here.  I love to go as, whoever the artist, it’s such a magical setting that you can’t fail to have a great time.  This year I missed out as I bought tickets for my daughter and her friend to see Mika and, although I kept hoping her friend would drop out at the last moment so I could go in her place(!), she didn’t so I had a meal in one of the lovely restaurants instead whilst I waited for them.

As seems to happen every year, the rain threatens to appear (it’s an open-air venue) but usually doesn’t until the very last minute.   I didn’t know any of these people coming out of the concert which is why I’ve blurred the foreground.  It was an artistic decision.  Honest!!