Stashbusting for Summer – The Final Part

Posted by tialys in Arts and Crafts, Dressmaking Projects on August 13, 2019

Although I can’t say I have used up all (or much) of my dressmaking fabric stash, at least I’ve had a go this year and here are two more dresses which at least are more useful than metres of fabric in a cupboard.

I didn’t like the ‘Stevie’ dress pattern from Tilly & the Buttons when I first saw it as it’s a boxy sort of shape with a high neck (both things I don’t like on me) but, when there was a 20% off sale, I suddenly felt more drawn to the fact that it is quite a quick make with no zips or buttons and ‘grown on’ sleeves – i.e. no fiddly setting in of sleeves into armholes.

I also really like that back yoke detail.  You can swap the bow out for a button and loop if you want.

The hem was an abomination and I have re-done it since these photos were taken.  I blame the nature of the fabric because I can’t possibly blame myself.

Double gauze is quite a ‘floppy’ fabric so the bow feature on the back works quite well here.

I made the second version using some fabric which has a sort of linen texture to it – or maybe barkcloth? – and also has a bit of stretch although it’s very stable and I think I bought it to make some trousers.  Ask me why.  I don’t know because I’m not really a ‘flowered trousers’ type of person but I think it was when I was experimenting with trouser making and fancied something with a bit of a summery feel.  Anyway, I came to my senses and used it for this dress instead.

Being less drapey it gives the dress more shape which is fine because it looks very different from the first version.

However, in this fabric, the boxy shape is more apparent and the bow isn’t as floppy as I’d like so I probably should have used the loop and button for this one.

and it appears to fit exactly the same 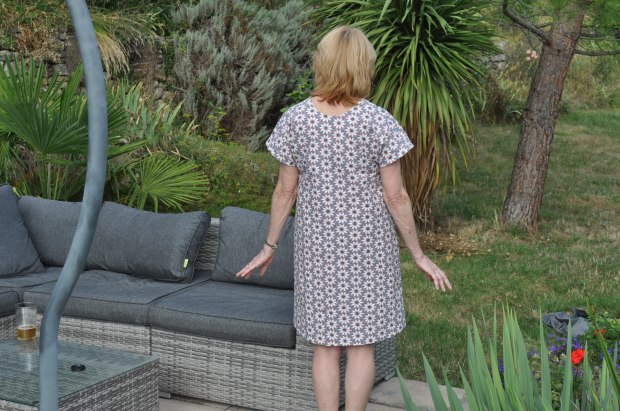 which is strange but I’m not complaining.

On the other hand I might have to have a word with my photographer as he has included dogs, dead plants, parasol poles and all sorts in these photos.  I did disturb him whilst he was having a quiet moment with a glass of some home brew (also in the photo!)  so I suppose I shouldn’t complain.

That will be all my summer makes for this year now using stash fabric.  I’ve made ‘a little top’ by hacking that old favourite the ‘Sorbetto’ but it’s not been photographed yet and, anyway, I did buy a metre of something called ‘dobby’ to make that so it doesn’t count as a stashbuster.

Look! It’s covered in the constellations.

I’ve cut out a shirt for Mr. Tialys in some Liberty tana lawn (above) and will concentrate on that next, going slowly, step by step, because I’m using a ‘new to me’ pattern from Liesl & Co called the ‘All Day Shirt’ and I’m determined it will be gorgeous enough – and fit him well enough – to wear to the office without shame or embarrassment.

Hopefully, it (if not he) will look something like this 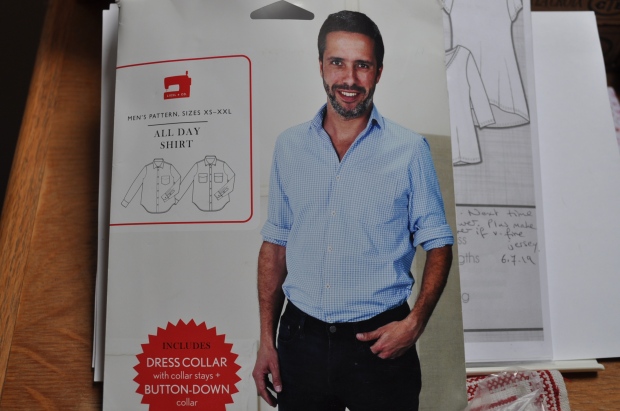 I’ll let you know how I get on.

Posted by tialys in Arts and Crafts, Patchwork and Quilting Projects - General on August 31, 2018

Inspired by Cathy’s big, beautiful hexie quilt top in progress she showed us recently, I ferretted around in my workroom and unearthed my box of hexies started a few years ago.  I had bought some thin card pre-cut hexies along with some fabric ones and, filled with the enthusiasm that is always evident at the start of a project, I started making them. 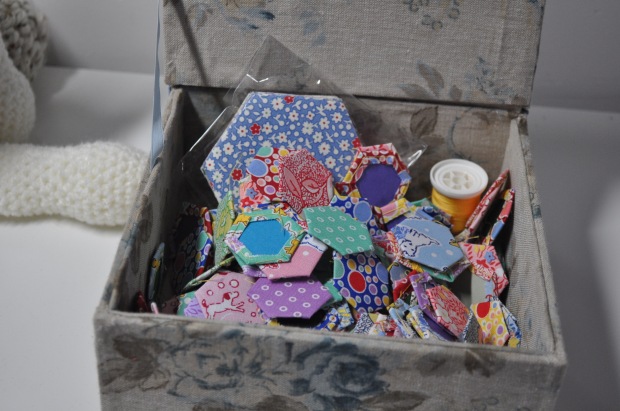 Although I did put one ‘flower’ together. 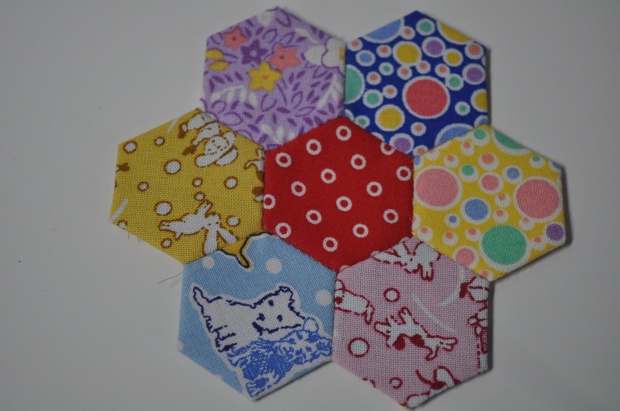 As you can see, this range of fabrics is very retro – it’s Chloe’s Closet for Moda called ’30s Playtime’ but there have been many variations of these so I don’t know which one this was.  They are all along the same lines however.

Then, probably the year after or maybe later, I bought a jelly roll of ’30s Playtime’ which is a different variation but near enough to make no difference.  I haven’t unwrapped it yet but I’m hoping there are more pups and bunnies. 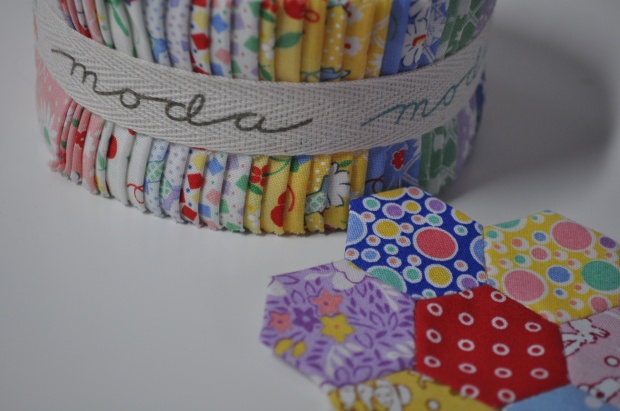 I think I haven’t progressed much with the hexies because I have no clear idea what I’m going to do with them.  I know, almost certainly, I will never have the patience to make a whole quilt with them. So, my question is, do you think I could join the ones I do make into a row – or however many rows I have enough hexies for – levelling that row (or rows) off to make straight lines – then make the rest of the quilt top with the jelly roll strips, inserting the hexie rows wherever they look right?

I also have some larger fabric hexies – just waiting for their paper/card inners – so the rows of hexies would be slightly different sizes.

Any ideas? Please! I have searched Pinterest without much joy as everybody else is obviously far more patient than I am and have mostly made quilts out of hundreds of little hexie flowers or similar.

Now for the second question.

Have you ever used double gauze fabric in quilting?

Double gauze has 2 layers of very thin gauze fabrics fused together, to create a soft, full bodied fabric.   I have some in the perfect colour for backing my F2F blocks which are all in neutral colours with a sort of ‘dirty’ pink – let’s call it ‘vintage’ pink – as a highlight.

When I get around to putting the blocks together, I will be using the ‘quilt as you go’ method for construction which, for the non-quilters amongst you, who probably aren’t reading this anyway, means I will make a wadding sandwich with the top and backing squares and quilt them individually, then join with sashing.

So, as you can see, my hedgehog block is sitting nicely against the colour for display purposes but I just wondered if any of you have any experience of this fabric in quilt making or in any other sewing projects.

Thank you muchly for any ideas, suggestions or general comments.  I know I can count on you.