Well, I’m hooked.  I’ve been stabbing away as if my life depended on it.  I watched a little video on Youtube and a woman was making little felted dogs and she made it look so easy that, despite the fact that I only received my starter kit the day before and have only made a heart so far thought, ‘Yay, I can do that’ as you do.

NOBODY is allowed to laugh…… 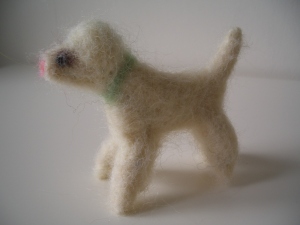 Well, it started off as just a short haired dog, then it turned into my golden retriever but I put too much hair on top of the head so it started to look a bit like a poodle then I lost direction a bit and seem to have given it a pig’s snout and it’s ended up looking a bit lamb-like.  Still, all in all, I’m pretty pleased for a second attempt.

I’ve now discovered how to get the needle in the handle – obvious to everybody but me, apparently – and, thanks Shelley, the tip about covering the foam block with a piece of fabric certainly saves bits of foam ending up in the wool and also makes it easier to lift the item up after it has been stabbed a few times.

I think I’ll have a go at a few more things over the weekend.  If nothing else it’s a good excuse to indulge in some under cover voodoo.