I keep meaning to tell you about the blockfest I’m a part of which has been organised by Kate over at Tall Tales From Chiconia  and Sue From The Magpies Nest and involves twelve people from all over the World.  It’s called Foot²Freestyle  because each block will have a finished size of 12 inches or a foot, get it?.  Every month, one of the twelve participants is ‘the one’ and the other eleven participants make three blocks and send them to ‘the one’ so there will be eleven parcels to open, each holding three patchwork blocks in colours asked for at the beginning of the swap.  I do love a parcel – it’s my turn in October.  Then, the recipient will make three blocks of her own, making 36 big blocks with which to make a 72 inch square quilt or whatever else you would like to do with twelve patchwork blocks (no rude suggestions please).

The first month, June, belonged to Esther from the Netherlands and her colour choices were backgrounds of white/light grey/cream and main colours of mustard,  jadeite/minty blueish greens, coral.

Many of the participants are habitual block swappers if their blogs are anything to go by.   I am not – this is my first and I was only tempted because it is being organised by Kate who has just won first prize and a best in show rosette for her beautiful hexagon quilt called ‘Worldwide Friends’ made, in part, using fabric sent to her from her readers and adorned on the back with some Haiku poetry some of which was also contributed by some of her readers.  I’m afraid, in the company of such talent, I have kept my blocks simple and concentrated on the colours and getting the finished size correct.  I don’t want to disappoint too much with wonky edges and non-matching points – although I’m sure everybody will be very polite about things, it is forcing me to be much more careful and accurate than I would be if I was just making for myself.  Which is a good thing, right?

Esther has now received her blocks so I can show you what I sent her. 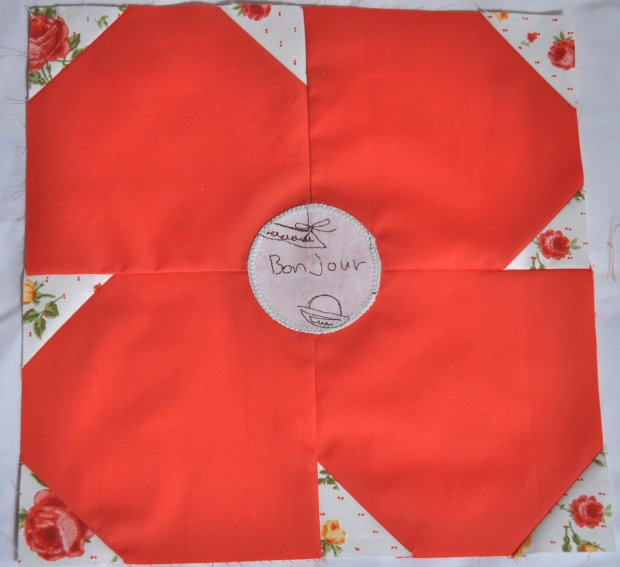 A Daisy with a touch of French in the centre. 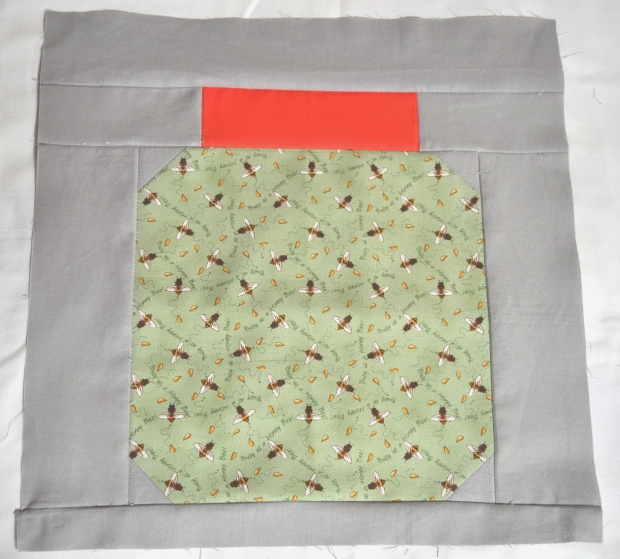 and, my favourite, an Anvil

They are not perfect by any means but I’ve kept well to her colour choices and hope she’ll be able to use them in the quilt or even for a coordinating cushion.

Next month is Annett’s turn from Germany and her colour scheme is a white background with orange, turquoise and green.

Easy with the postage so far but there are participants from farther afield – Australia and the U.S. for instance but the three blocks fit in a  nice small package and will go letter post so not too bad.

Any suggestions for 12 inch blocks that are interesting but not too difficult (i.e. not too many points!!) would be welcome.