Gourds, Sunflowers and a Dire Warning

Posted by tialys in Life in France on September 2, 2013

I thought I’d wandered into a kind of French South Park episode at the weekend when we decided to go to a nearby village and see ‘Le Jardin Enchanté’  (the enchanted garden) which is only rarely open to the public and saw this sign. 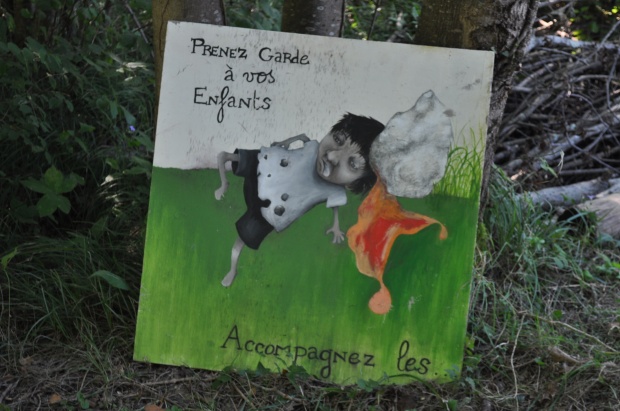 Translation:   Supervise your Children – Stay with them.

Yes, there was a river with quite a few rocks around and the French aren’t ones to install safety barriers around things but I’m not sure the illustration needed to be quite so graphic. 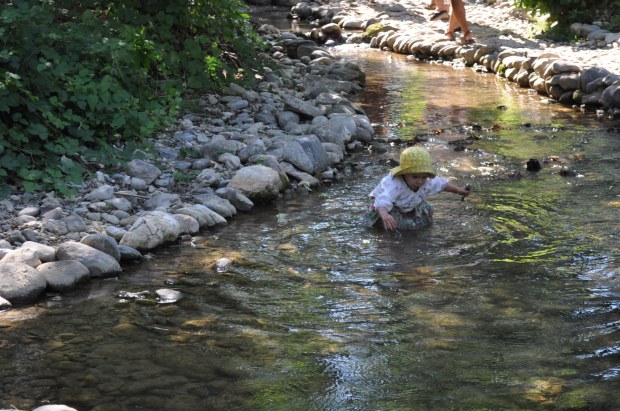 Or maybe it wasn’t graphic enough as this little tot’s father was actively encouraging a bit of extreme river and rock playtime.

The idea of the day – if I understood the blurb correctly and it’s possible I didn’t –  was to combine art with agriculture and there were some interesting examples.   Being the beginning of September, gourds and sunflowers were mostly the objets d’art of choice.

and the dressed to kill tree

Not sure about the unfortunate swelling on the front there!

Marks and Spencer trying to save money on lingerie models?

Moving away from the primitive art, there were some gorgeous end of summer colours.  The sunflowers in our garden only grew due to the cast off seeds which dropped off the birdfeeder in the winter so we can’t take credit for those and we are a bit high up to grow some of the other plants so I was a bit envious. 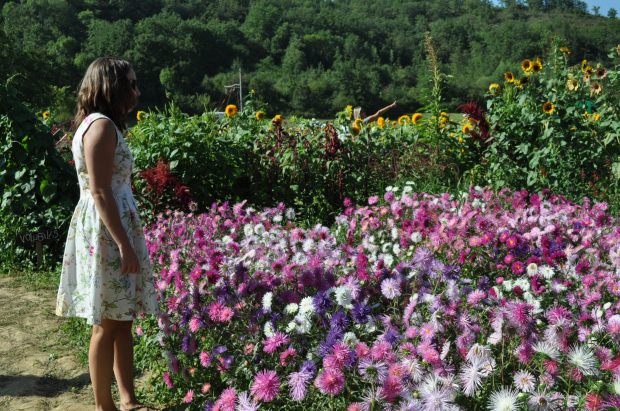 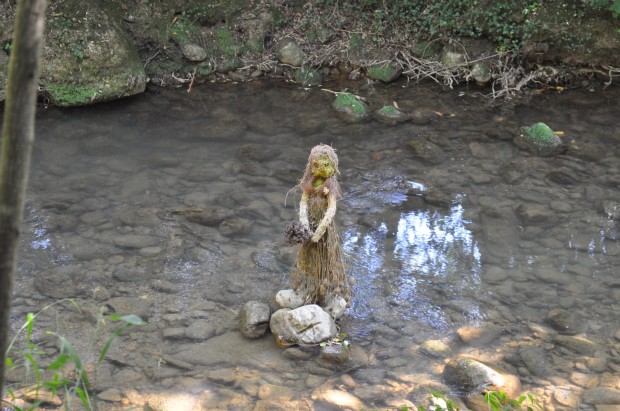 Some quite subtle installations and (back to the primitive art)

It was a lovely place  with a very ‘hippy’ feel to it with brightly coloured baggy trousers, piercings and dreadlocks in abundance  – some spots along the river had incense sticks burning amongst the stones and flowers –  definitely different from the more traditional garden open day in the U.K.   Some of the ‘spectacles’ were a bit weird and very French.  One appeared to consist of a grown woman playing with a doll made out of straw in exactly the sort of way my daughters used to play with Barbies,  apparently for the entertainment of the crowd.   On this evidence we decided not to stay for the spectacles due to take place later in the day even though it was all free.   A good excuse for a family afternoon out  before college and University start again though and an opportunity to take some silly photos like Mlle. T the elder (in her recently finished handmade dress, please note!) pretending to use a gourd as a punch bag – as you do.

Back to the sewing table next time and some tips on what to do with fabric covered in Dr. Who’s tardis – how I tempt you.

We have lots of wild orchids in our garden and this one is the first to appear, I think it is called Early Purple Orchid (imaginative, huh?).    It is a sign for Mr. Tialys to stop cutting the grass above a certain level as he doesn’t want to mow these beauties down – well, that’s his excuse anyway.