Posted by tialys in Arts and Crafts, Crochet Projects on November 14, 2019

Around this time last month, I attempted to show you some autumn colour but it hadn’t really started turning yet here.  We’ve now had a bit of rain and it seems we have gone straight from Summer to Winter at least up on those peaks. 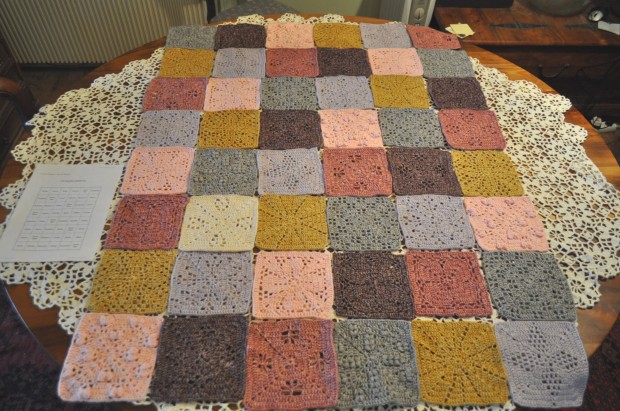 The colours look a bit ‘muddy’ here because I made the mistake of laying them out in a room without much natural light  – see above photo for more accurate colours.

The rogue off-white square is there because I found the last square design given to us a complete nightmare to do and couldn’t face another one so I’ve put in my test swatch as a substitute.  I call it my ‘signature’ as it will differentiate it from all the other blankets made in this colourway and it’s also a good excuse.

Although I’ve fallen behind by a week (will soon be two) at least I’ve managed to actually get all the squares done which was the important thing as far as I was concerned.  I’m not going to rush to join them together just to keep up so it might be some time before you see the finish.

Plus there’s quite a fancy border to go round the edge which looks as if it might occupy more than a few evenings when I suppose I will be forced back into my addiction – watching Greys Anatomy on Netflix – I’m up to series 3, only 14 to go.  It’s not got any better – the lead actress is still as lachrymose as ever and her erstwhile beau is a match for her in tear production.  In fact, last night, I wondered whether watching this series is possibly bringing out the worst in me.  When our leaky heroine was dragged from the water half drowned by her wet- in both senses of the word – boyfriend and taken to hospital where they tried their utmost to revive her for over an hour and a half – I’ve never hoped so much to see a flatline.

Posted by tialys in Arts and Crafts, Crochet Projects on October 17, 2019

Phew! Week 3 of the Nature’s Walk crochet along is over and I just finished the last of the eight squares last night whilst watching the hospital drama ‘Grey’s Anatomy’ on Netflix.  Why I watch that show I don’t know.  I’m extremely late to the party and am only on series 2 and there are, apparently, 15 series to go.  I sort of like putting it on while I’m crocheting because it’s not something you have to concentrate on over much although, if I’m honest, last night’s ‘man who had an explosive device inside him‘ episode caused me to have to look up from the hook and yarn a few times.  My main complaint is the central ‘love story’ which is completely stupid.  I want to scream every time their eyes meet wistfully across a crowded operating theatre or yearning is expressed over their surgical masks above some poor patient’s opened body.  Is it really possible that, in a large hospital, every time the elevator door opens the object of your desire will be inside or waiting to get in so that even more barely held in tears can be shown welling up in the eyes of one or both of our wet couple?  If you have watched this prolonged story of hospital folk – please tell me this mooning about doesn’t go on for the whole of the seventeen series or tell me it does and save me before I get deeper in .

On our Nature’s Walk in week two we had a design called ‘Berries’ to do.

I’m glad it was in this colour as I’d have a job thinking of those holes as berries otherwise.  See I have kindly given you a visual clue.  Something exciting must have been happening in ‘Grey’s Anatomy’ while I had this one on the hook as the sides are a bit skewiff but nobody will know once it’s sewn in with all the others.

The bonus square in week two was called ‘Wheat’ .  I can’t tell you how many moans and groans and hate mail there were about this pattern but, although it took almost twice as long as the others so far, I found it fun to do and love the result.

Lord knows what that lookie likie plant is – I plucked it out of one of the planters on our balcony and it will be the result of seeds dropping off the bird table so it could be anything but you get the idea.

Week 3 bought us a gorgeous little square called ‘buds’ which reminds me of little baby bottom cheeks.  Some others said cleavages and yet others said something rather more ‘masculine’.  You never know who you might meet in a Facebook support group. 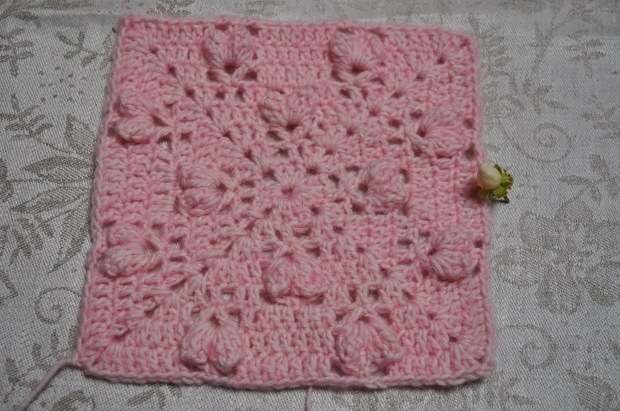 The bonus square was called ‘Sunshine’

So, they’re stacking up nicely and, if I don’t manage to keep up, at least I have another 15 series of ‘Grey’s Anatomy’ to see me through.