Since my last post was about the demise of my lovely old German Shepherd, I thought I’d better do another one so that anybody coming to my blog for the first time isn’t instantly depressed by the opening page so I will ramble on about my sewing exploits instead which may well depress some of you even more.

Back in the mists of time – well, let’s call it May – I showed you a dress from a French craft magazine that I had started on and – tadaa – here it finally is.  I know I am headless but it’s the best way and, anyway, it was Bastille Day here in France yesterday so I thought it somewhat appropriate.  I am vaguely pleased with it – it was my first stab at an invisible zip and, guess what? – it actually is almost invisible.  However, the dress is a bit big for me so I can pull it on over my head without undoing the zip so I could have done away with it altogether and then it would really have been invisible.  So, a bit big, I wish I’d done the top stitching in purple rather than white and the fabric could have been a bit ‘drapier’ in order to make the cowl neckline softer but, apart from that, fine for floating round the garden this summer. 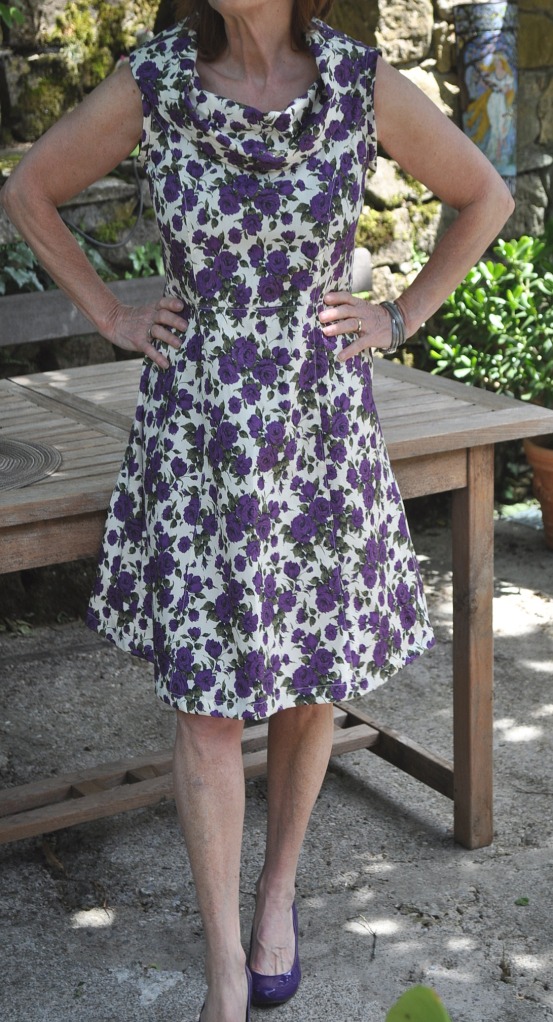 This next dress was made some time ago.  It is Amy Butler’s Lotus tunic dress.  I rediscovered it in my wardrobe as a fellow blogger, Sew2Pro,  had made one and wasn’t pleased as she said it made her look heavier than she really is and I said I though it was very slimming so I’d put it on my blog to show her.  I made this, probably 3 or 4 years ago and, when I dug it out of the wardrobe, thought it was a bit long so took it up a little.  The shoulder yoke thingies and sleeve edgings are in contrast fabric although it is from the same range of fabric from FreeSpirit so the contrast is fairly subtle.  I must have been going through a very ‘pernickity’ phase at the time as this is all nicely lined in muslin so very cool to wear.  The little corsage was made by a friend of mine and, by coincidence, matched the colours of the dress exactly so I pinned it on immediately.  It is certainly not to cover up a less than perfect neck shaping – no not at all. 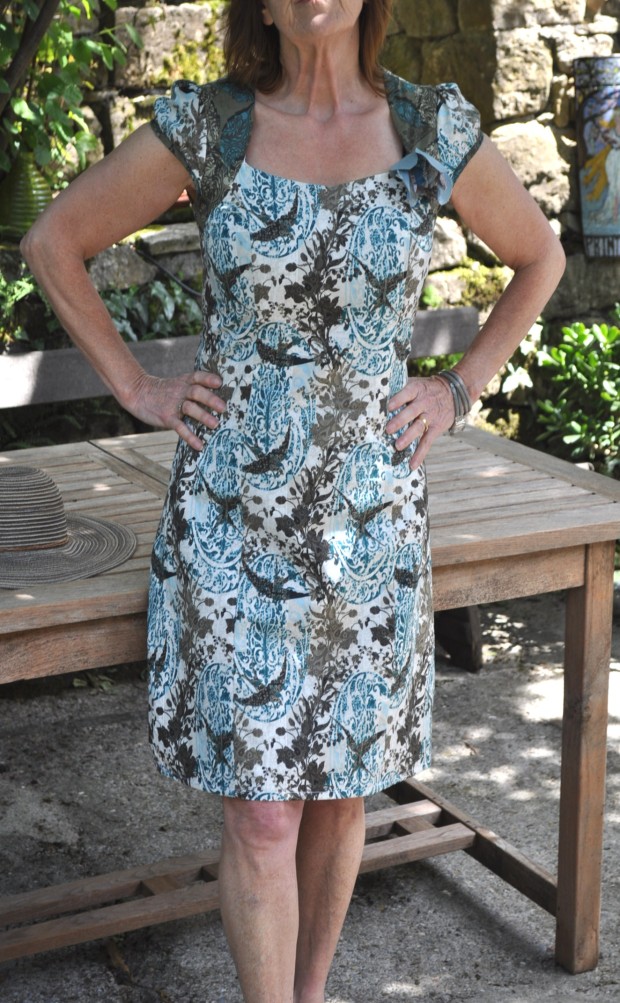 Eeek! Got the head back in this next one but I have taken the precaution of wearing sunglasses the size of dinner plates in order to shield you from the worst of it.  This gypsy blouse is made from Butterick B4685 which I first saw on Ooobop’s blog and, like her, I made view D but without the central lace panel and the underbust elastic as lord alone knows what that would have done to my shape.  Anyway, it is indeed a very easy pattern and I have since made another two.

One for Madamoiselle Tialys the younger – quite an achievement as she is normally in black and adorned in skulls, etc. and one in yellow for Mlle T. the elder but I haven’t had chance to photograph it yet.  I promise we will not all go out ‘en famille’ wearing the same blouse and, in any case, Mr. Tialys has declined my offer to make him one.

Now that I am back into dressmaking – can you tell? – I have started following more of those types of blogs and now I know all the hot topics and favourite patterns.  I fancied a go at t-shirts and Sewaholic’s Renfrew pattern seems to be the choice of those in the know at the moment so I ordered a copy.  You may remember, if you have been here before, that I was going to have a go at making my own knickers but, so far, the attaching of stretchy elastic to stretchy fabric, has proved an elusive skill and, being one of those people that buy all the stuff necessary for something before actually knowing if they are going to actually like it, I have lots of stretch fabric in my stash with nowhere to go.  The fabric I used is possibly a little silky and fine for what I would normally describe as a t-shirt but it was only 3.99 a metre so I thought I’d have a play with it and sort of use it to make a toile.  Anyway, my first mistake was to forget the pattern was sized in U.S. sizes so I made it about 3 sizes too big but, as the sleeve seams and side seams are all sewn in one, it was easy to take it in.  I had followed Lladybird‘s advice and cut an inch off the neck band so that you have to stretch it slightly to fit but I think another inch could have come off.    I’m not 100% certain I like the band around the bottom even though it does make for a neat edge so, next time – and there is already another version on the cutting board – I might do something a little different.

I don’t know whether I mentioned that my god-daughter is expecting a baby in October so my thoughts have turned to baby clothes which, more than babies themselves, making me go all wibbly.  I am going to make her a quilt – better get started soon knowing my record with having a quilt ready for an actual date – but, in the meantime,I ran up some of these gorgeous little bibs which you put on your baby like a little bandana – how cute are they?  Not having a baby to hand – and I say that without regret – I used a couple of rather fetching bears to model them for me.  Note that these are very posh baby bibs as they are made from Liberty of London tana lawn and, normally, I wouldn’t condone drooling or vomiting on such beauteous fabric. 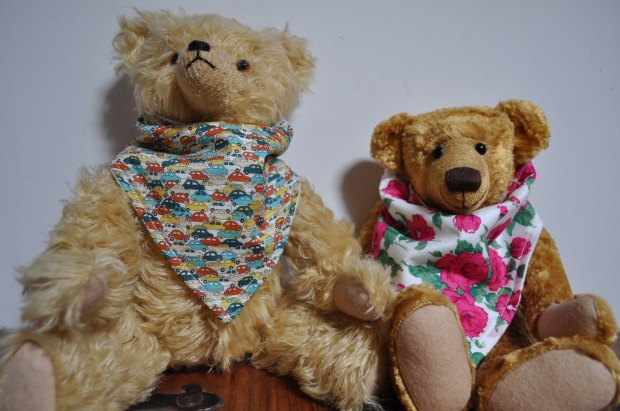 These can also look quite cute on dogs though, with that type, you need to put a channel through the top for the collar to go through and, of course, I do happen to have a dog to hand for posing purposes.  Note that there is an absence of Liberty of London here as drooling and vomiting are only two of the many perils where my dogs are concerned, another being fox poo. 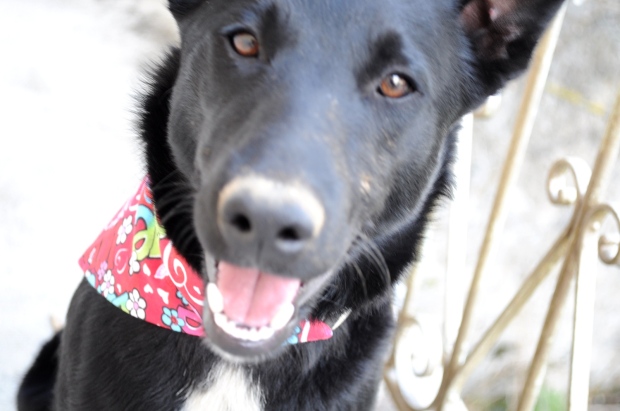 I am going over to the U.K. for one of my rare visits later this month so, if I don’t get chance to post again before then, I will be back to tell you all about my trip which will definitely involve fish and chips, Brighton, fabric shopping and, possibly, a visit to my parents.