Posted by tialys in Arts and Crafts, Patchwork and Quilting Projects - General on March 29, 2019

Remember I asked for some advice as to whether the foxes on the fabric I was using for the baby quilt really had to be upright which meant messing with the layout of the the design?  Well, those pesky foxes have been tamed, turned on their heads, or sides and sometimes even on their feet and have become a quilt for my great niece who is due to make an appearance in June.

These ‘on the washing line’ photos aren’t the best but are to show you the quilt in its entirety.  The sun is so bright again today they look a little bleached out and creased.  Still, here goes.

As you can see, I saw the sense in putting a narrow, plainer border between the centre design and the busy border.

I also used the same fabric for the back around the centre panel I’d already made from the leftovers of the foxy range fabric.  I was quite brave as, although it looks plain white, it does have tiny spots on it.  Brave because I usually try to hide my quilting – be it by hand (rare) or machine – as much as possible and the plainer the fabric the more obvious any mistakes.

I stitched in the ditch and round the borders because I felt it went well with the geometric design and, I cannot tell a lie, because it’s easier. 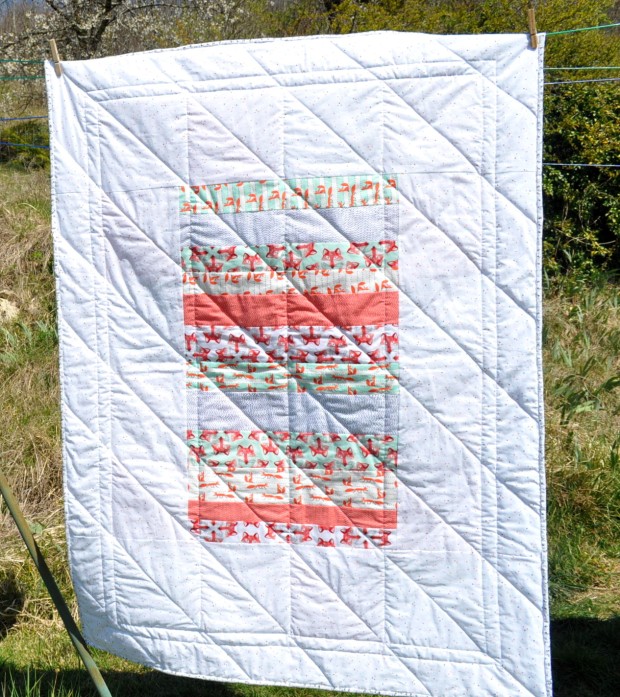 Here you can just about make out those little spots – even more easily if you double click on it.

I had to put the parasol up in order to get these outdoor sofa photos otherwise there were shadows, bleached bits and all sorts.  This time last year it was almost constantly raining so I’m not complaining.

If you zoom in you can see that those orange and ‘grey’ triangles are not solid colours but orange with white dashes and white with black dashes.

I definitely think the foxes are fine dancing around the quilt and not forced to be upright.  The only thing I’d change would be the colour of the binding as I would have liked to do it in the same orange as the triangles but they are a sort of burnt orange colour and I didn’t have anything in my stash that fit the bill, whereas the white with black flowers was to hand and I am trying to use fabric I already have as much as I possibly can.

I had to miss out the top row in this last photo but it looked lovely draped over the garden gate and the light was just right in this corner of the garden.

I won’t be sending the quilt until the baby is born because I want to put her name and date of birth on the quilt label but, never fear, I have displayed it in the sure and certain knowledge that my niece never has and never will look at my blog.

If you’re at all interested, the pattern I used was a free one I found here.

Posted by tialys in Arts and Crafts, Patchwork and Quilting Projects - General on February 11, 2019

An intermediate ’emergency’ post this week, bringing my total to three by the time my scheduled post is published tomorrow and it will only be Tuesday.  Tialys overload! Sorry about that but it probably won’t ever happen again.

I wanted your valued opinions on a baby quilt I’m making.  The recipient will be my (other) niece who is due to have a girl baby in June.  I had some entirely different fabric in mind when I went to root through my stash but then I came across this little lot. 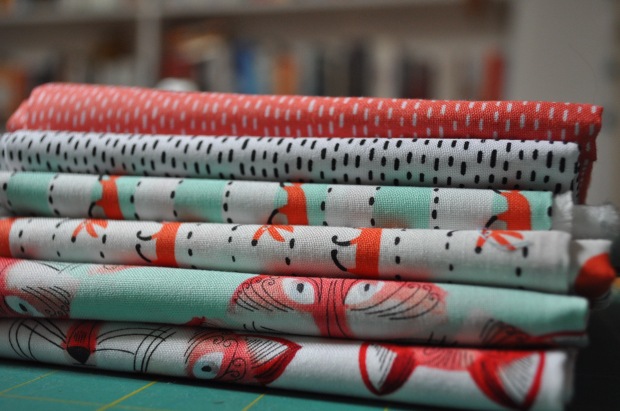 I like the pale green and I thought the orange foxes and small black details would give it a lovely, modern feel.

I chose this pattern from Craft Buds which uses HSTs (half square triangles)  and also has a modern look to it so I thought it would be a perfect marriage of pattern and fabrics.

Click on photo to go to Craft Buds free pattern.

The triangles are made using a method which gives you four HSTs at once.  You separate your fat quarters into three pairs, then place two 18inch squares of one pair right sides together and draw a diagonal line from corner to corner.  Marking a quarter of an inch from each centre diagonal, you then sew down those four lines.  Cut through the centre both horizontally and vertically and then cut each resulting square on the original diagonal mark.  Confused?  Just click on the above photo to see a much more comprehensive explanation.

This is what my fabrics looked like laid out flat.

I expect, unlike me at that stage, you can already see my problem.  Those smaller foxes are directional and, because of the cutting method used by this pattern they were all over the place which, because the blocks are large at 8 inches square and the design of the quilt is geometric,  just didn’t really look right.

Craft Buds had the same ‘problem’ – see her layout below – but her fabrics don’t have any ‘characters’ on them and it really doesn’t matter which way up a pair of scissors goes does it?

So, despite what I said to Cathy on her blog the other day about direction not really mattering as a quilt is viewed from all angles, in this case, I don’t think I’d be happy with the layout as originally planned.

See what I mean? Click on the photo for a closer look.

So, I then had to play with all the blocks to see if I could make a half decent design whilst getting all the small foxes to stand on their feet.  Here they are, precariously clinging to a flannelette sheet on my makeshift design wall……. 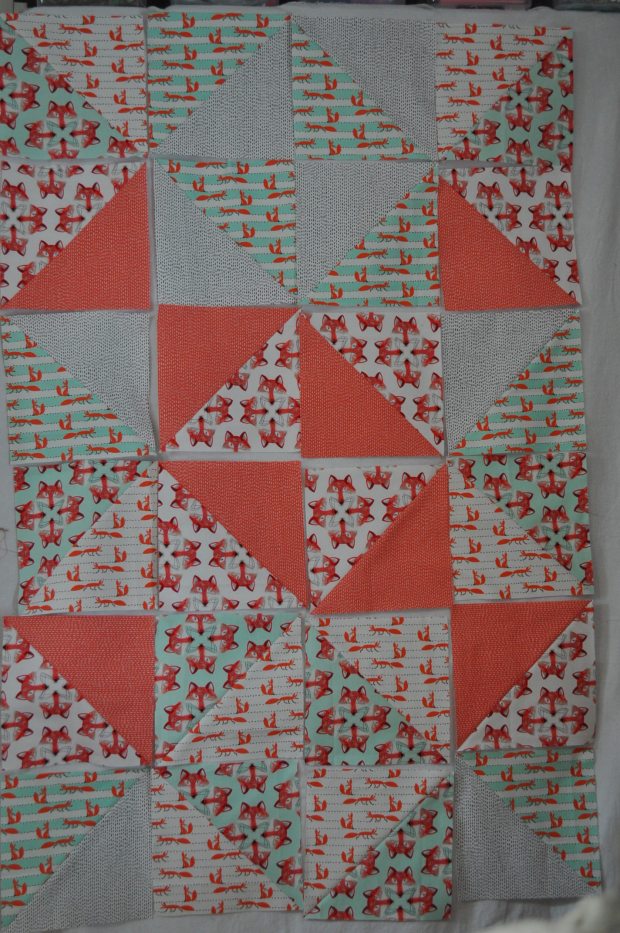 ……… and a distance shot so you can see the overall effect.

It will have a border around it – probably some tiny black flowers on a white background I have – but this is it at the moment.

What do you think? Can you see any glaring anomalies in the new layout?  Can you think of any other way I could do it?  Or do you think I should stick with the topsy turvy foxes?

Also, what do you think of the colour scheme? Do you think it is ‘girly’ enough?  I do have some soft, pastelly, birds, rabbits and flowers fat quarters which I’ve long had in mind for the next baby in the family but, if I used this pattern, I would have had the same problem with direction – although the prints in that range are much smaller so I could probably get away with it.

p.s. Another title I possibly have to apologise for but I just can’t help myself.