Posted by tialys in Excuses Not to do the Housework, Life in General on October 1, 2013

Just to let you know why my Colette Zinnia skirt is still a work in progress and why I haven’t started another Skater Dress even though I’ve got the fabric.  We’ve got the builders in.  Well, I say ‘the builders’ it’s actually just one builder and I was very pleased with him until today when he disappeared a bit early and isn’t coming tomorrow at all, leaving me in a miasma of dust and uncertainty. Our old insert fire was showing its age and the faux chimney breast above was cracking badly so we decided to have that knocked out and get a free standing wood burner as we have in another room. 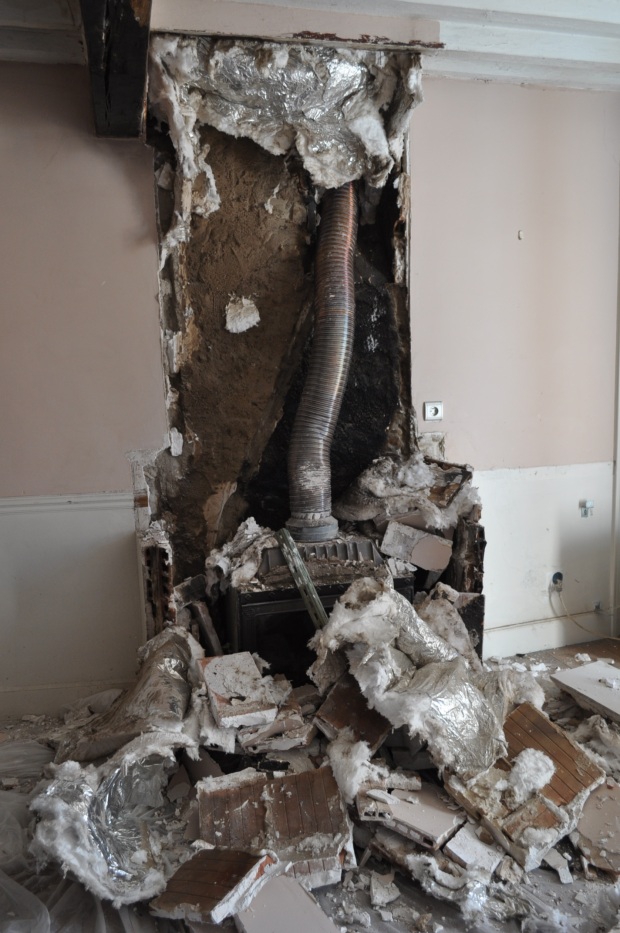 Yes, that’s the sort of thing, now just take out the old insert and make the wall good.  What’s that you say?  The wall to the right hand side has a void behind it so you could take it right back and take out the cupboard in the corner – it would make a bigger room.    Oh, go on then. 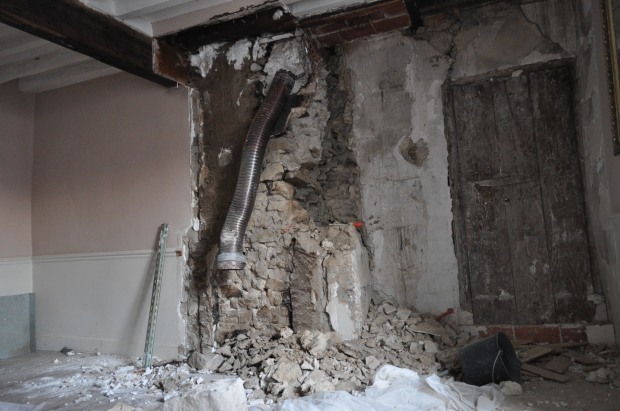 Aha! there is a wall in front of the other wall and the first wall is crumbly and unstable, shall I knock that out too?  Oh, go on then.

Back to the original, original wall now, well mostly.  I suppose these things happen when you have an ancient house and we know this and usually don’t tackle anything needing more than a screwdriver or, occasionally, a bit of light drilling.  I’ve always fancied an exposed stone wall so that’s one redecorating decision made.  There was an old doorway behind the cupboard and we plan on keeping the frame and infilling with stone – of which we have plenty – see small sample on left.  At least the flue is now hanging straight down instead of draped across a crumbly wall.  Stan is looking for rodent skeletons.

Ready to start backfilling and pointing up now but the builder has gone and won’t be coming back until the day after tomorrow.  Something about not having the right sand.

Might as well go and finish putting the pleats in my skirt then.

Posted by tialys in Excuses Not to do the Housework, Life in General on February 1, 2012

Another entry in my occasional series of good reasons not to get on with the housework is also a brilliant vindication of whittering away about everything that occurs to me on my blog.

Apparently, according to a study in California, women who regularly write about things that matter to them lose more weight than those who don’t.

Using a test group of 45 women, the researchers asked half of them to write for 15 minutes every day about something that was important to them and the other half to write about things they had no particular interest in.  Four months later, the first group had lost, on average, 3.4lbs, the second had gained 2.7lb.  If you are writing about something you care about, you are happier, thus less likely to snack – allegedly.

Now, whilst I would like to believe that sitting on my backside in front of the screen is a form of fat burning exercise, I can’t help but think that pushing the vacuum cleaner around and wielding a duster  might actually be more effective.  So, after serious consideration, I don’t think I would be able to present this evidence to Mr. Tialys when he asks why he hasn’t got any shirts ironed again so it might not be my best ‘excuse not to do the housework’ entry.

Also. Haven’t these researchers in California got anything better to do than this?  Shouldn’t they be finding a cure for Alzheimers or something?

*Wonder if I can have another slice of cake now*

Posted by tialys in Arts and Crafts on January 7, 2012

Is there anything more depressing than taking down the Christmas decorations?  Well, of course there are plenty of things but you know what I mean!  Plus, lots of dust which was lurking under baubles and cards and tinsel is now revealed which means the dreaded housework must be done straight away.  Bleurgh.

Still, it’s Valentine’s Day soon and hearts and flowers will be everywhere.  Today’s Saturday Selection – as this is not just a post about moaning and whingeing – is the beautifully named  ChezSucreChez where you can buy lovely little cross stitch items which have been made by them or kits for you to do yourself.  As you may recall me saying in the past, cross stitch drives me crazy and, as I don’t need any help in the frustration and eye strain department, I leave it well alone and marvel at the skill and patience of others.  However, Madamoiselle Tialys, the elder, has discovered a liking for the craft and I am busy collecting supplies for her so that she can make things for me for a change.    I have ordered this great little kit from ChezSucreChez so that she can make this one to give to her ‘petit ami’ on Valentine’s Day.  Her friends’ nickname for her is ‘squirrel’ (or ‘ecureuil’ as we are in France) so I thought this would be appropriate. 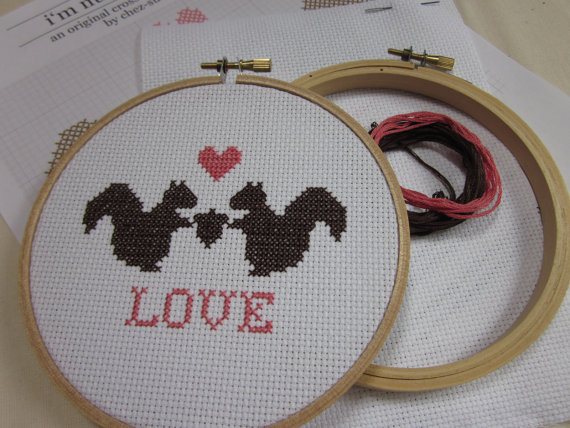 On with the dusting and vacuuming now – well, maybe after lunch…….

Stunning Statistic of the Week

Posted by tialys in Life in General on September 6, 2011

According to an article in The Economist,  many women in Asia are now rejecting marriage because, although more of them are now working,  they are still expected to fulfil the traditional domestic role.  The example given is that of Japanese women who will often work outside of the home for 40 hours a week and then spend another 30 hours on housework.

30 hours?  That’s more than 4 hours a day.  I thought a lot of Japanese people, in the cities at least, lived in appartments or favoured minimalist design such as this –

Now, as some of you may know, I am not a fan of housework and tend to be economical with the vacuum cleaner and a damp duster, but even I could tackle a room like this without fear.  Look – no dust collecting ornaments, shelves, books, lampshades, radiators, firplaces – hardly any furniture at all in fact!  No rugs, no dogs, no people, no sign of life.  I see now where I am going wrong.

Perhaps if I get rid of the stock waiting to go into my vintage shop, ditch the candlesticks and baubles, tear out the log burners and install underfloor heating, kick the kids out, slide the ‘closed’ button on the cat flap and take the dogs down to the rescue centre –  my house could look as clean and tidy as this even without spending  30 hours a week on housework.

Flippancy aside, I know not all Japanese people are quite so minimalist (or have what appears to be a mini swimming pool in their bedroom) but 4 hours a day?  What do they do?  Or, once again I must ask the question, ‘is it me?’

As a footnote – the same article says that, as opposed to the 30 hours a week spent on housework by the women, the men do only 3 hours a week – now, that’s more like it.

Posted by tialys in Excuses Not to do the Housework on August 19, 2011

I love finding excuses not to do the housework and today it’s 34 degrees outside and too hot to move let alone stand anywhere near a steam iron, but, if that wasn’t enough, here’s another one.

(courtesy of The Independent newspaper)

Posted by tialys in Excuses Not to do the Housework, Life in General on November 15, 2010

I hate housework! You make the beds, you do the dishes and six months later you have to start all over again.

You and me both Joan!  I usually put ‘housework avoidance’ down as one of my interests.

I remember when my girls were at primary school and they came home one day clutching  a sheet of paper with their handprints on and this little poem alongside emphasising the need to play and have fun and make the most of your children and not keep worrying about everything being clean and tidy.  Sentimental?  Yes.  Something I took to my heart and have used as an excuse ever since?  Hell yes!

Now, where’s the number of that cleaning agency?

Posted by tialys in Excuses Not to do the Housework, Life in General on August 18, 2010

Some friends have taken my girls off to the beach today. I would have liked to have gone  too but I can’t leave 3 dogs on their own for more than 5 hours. So, I have the house to myself.

What a good woman!

Things I Should be Doing:

Damp dusting  (Love the sound of that!)

Tidying up my workroom

Baking (I don’t usually, but it seems like a ‘good wife & mother’ thing to do)

Things I Am Doing:

Re-jigging my Etsy shop because admin has changed the layout and now it doesn’t look right.

Thinking about having a bowl of cereal for lunch

Waiting for the postman in case he brings me a parcel

Generally, doing anything other than housework.

I Must Do The Housework!!

Posted by tialys in Arts and Crafts, Excuses Not to do the Housework on January 14, 2010

I can’t think of any reason to actually like doing housework and ironing but, there’s no getting away from it, unless you want people to think you’re a complete slob, it’s got to be done *sigh*.

There are always plenty of other things I can find to do rather than the hoovering – usually dog walking, talking to the teens (or more like just listening these days), facebooking, blogging, talking on the telephone, eating, making tea or, most often, creating some new thing that amuses me.   As I sell my things, they must be photographed and I quite enjoy it but it is yet another thing that takes up valuable dusting time.

I feel I am getting more creative with my photography – I’ll have one sitting backwards on a ladder back chair next, looking sultry – although I don’t think that would be possible with an owl – legs aren’t long enough.