The Long and Winding Road

The past week has had some ‘irksome’ moments and I’ve been feeling a bit stressed.  Nothing to do with health – just so you don’t worry about me – but stressful nonetheless.  Which is the only way to explain me being a complete numpty the other day.

After my craft group meeting finished I realised I needed to put some fuel in the car and for the first time ever in my whole driving life – which is quite a long time – I put in the wrong type.  I realised after about 30 litres and £42 and then stopped, rushed into the garage shop and asked what to do,

I had a vague idea I could just top it up with the right fuel and all would be well but no! I wasn’t even allowed to start the engine for fear of damaging it  After much umming and aahing, the charming mechanic at the garage said I could leave it there and he’d try to fit it in but they were extremely busy due to Monday being a bank holiday and everybody wanting their cars ready to cram up the roads for the long weekend.  This is the downside of our decision, now that Mr. Tialys works mostly from home, to manage with one car between the two of us.

Luckily, I had waited until the garage nearest home to  mess up big time so I started on the walk of shame, knowing I’d have to ‘fess up to Mr. Tialys that 30 litres of fuel would have to be pumped out and recycled, for which we’d have to pay the best part of £200  and then pay to fill the car up again with the right stuff.

So, in clothing chosen on an overcast morning, I set off up the hill in an afternoon of full sun with a handbag suddenly seeming to be full of lead weights,  my knitting bag and no water.

but at least the scenery is nice.

After what seemed like forever – although it was only about half an hour – I saw ‘the girls’ who are enjoying the grass in the field opposite our house at the moment  – and prepared to spill the beans to Mr. T.  who was absolutely fine about it of course.

Just in case you think I’m a wimp, we did an 8km (5 mile)  walk this morning which included an Iron Age hillfort at the highest point in Dorset (279m/915ft) and took a couple of hours but then I had water, no heavy bag and was wearing shorts, a t-shirt and walking boots which makes a difference.  Plus I wasn’t all hot and bothered because I’d made a mistake and wasted loads of money.

So, be honest with me, how many of you have put the wrong fuel in the tank?  Surely it can’t just be me. 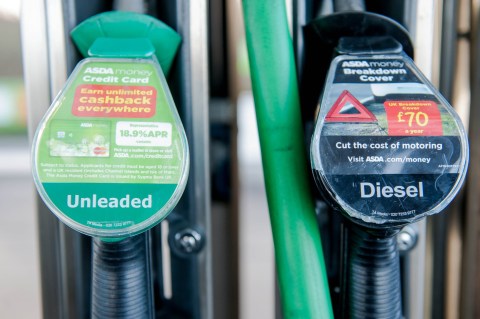 I won’t be doing it again.