Posted by tialys in Arts and Crafts, Dressmaking Projects on November 12, 2019

After the success of ‘the Constellation shirt’ you knew it wouldn’t be long before I got another one on the cutting table didn’t you. 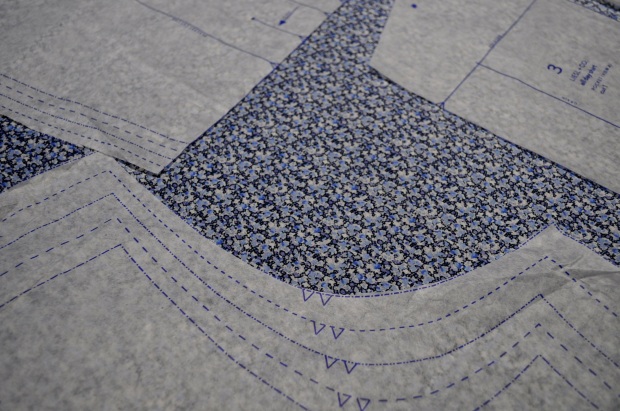 Having discovered the last Liberty fabric design was actually called ‘Kevin’ and not ‘Constellation’, I was relieved to find that this one, which has long been lurking in my stash,  is called ‘Pepper’ – aah, that’s better.

Posted by tialys in Arts and Crafts, Dressmaking Projects on November 7, 2019

Remember I told you I was making a shirt for Mr. Tialys – using the Liesl & Co. All Day Shirt pattern and some beautiful Liberty of London tana lawn fabric?

Well, it’s done and I’m as chuffed as a chuffed thing  with it. 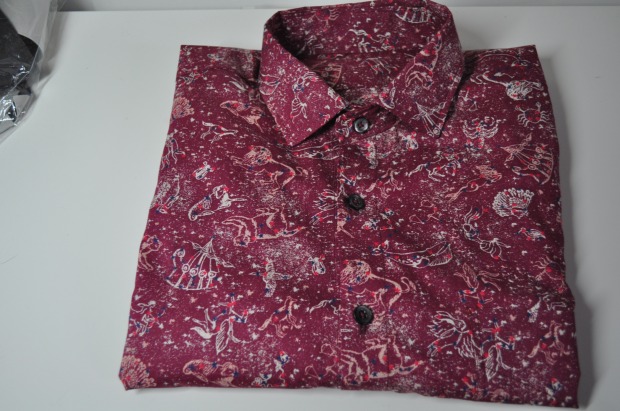 It was such a pleasure to make this.  The pattern instructions are clear and thorough so the collar went together easily and I only had a slight wobble with the cuffs – even though they were made in the same way as the collar. It also helped that the tana lawn is so lovely to handle and sew. 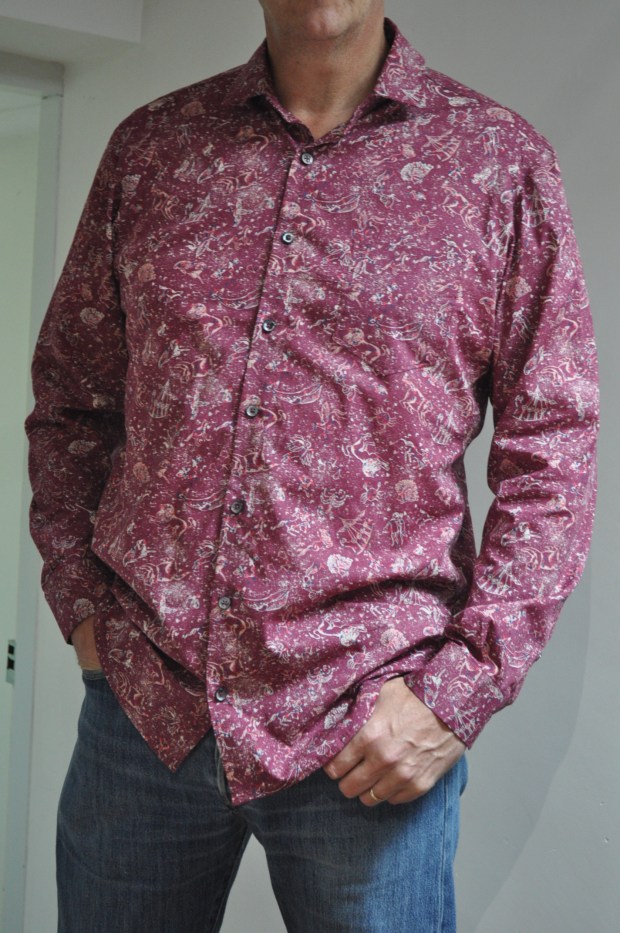 He’s 6’4″ and quite broad so I made the XL size and didn’t make any adjustments.  The only thing I’d change next time is to do felled seams around the armholes instead of finishing them on the overlocker as I did this time because the inside of the side seams look very professional and I wish I’d done the same with the armhole seams.  Also, there’s a tiny bit of fullness at shoulder level that I could work on next time.  Other than that, he’s very happy with it and took it off to the U.K. to wear to work this week. 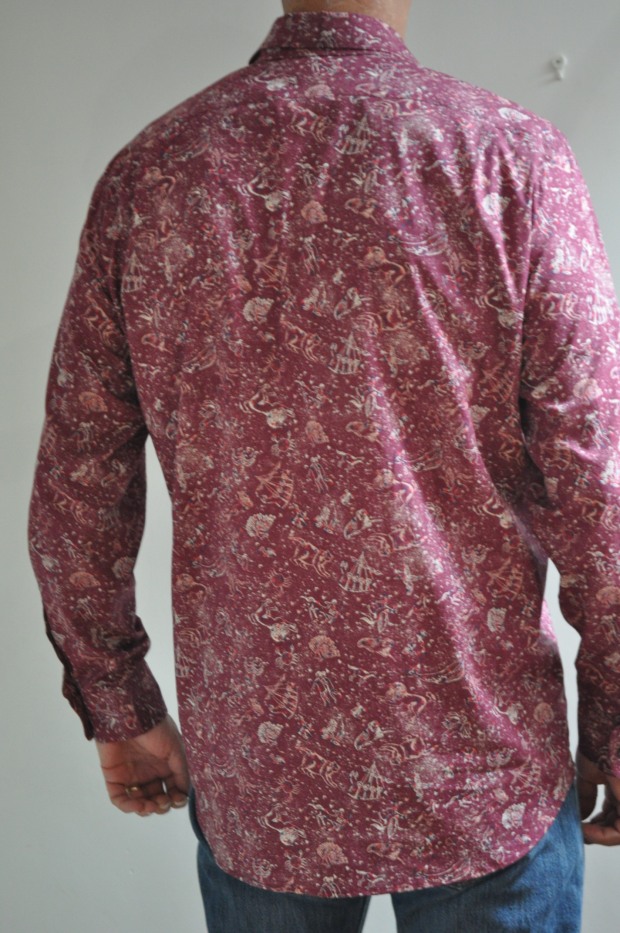 I’d been calling this Liberty fabric design ‘Constellation’ but decided to search for the correct name.

It turned out to be Kevin!

Apologies to anybody (including my cousin) who is called Kevin but it’s one of those names that have fallen out of favour (in Europe at least) and is usually given to characters on T.V. who are definitely not the hero in the plot if you get my drift.  More than that, however, it just seems a very prosaic name for a beautiful design.

This is what Liberty had to say about it on their website.

Kevin Liberty London fabric was based on the celestial ceiling art in the hallway at Mount Stuart in Scotland. The constellations in the print were hand drawn in white and grey chalks on black paper to create a conversational starry night.

Yes, that’s all very well but were those constellations drawn by somebody called Kevin? I need more information.   In any case, it will always be known to me as ‘the constellation fabric’.

Just a close up of my collar complete with stiffeners – remember I showed you the ones I made using a cut up Liberty store card? – and my sleeve placket and cuff. 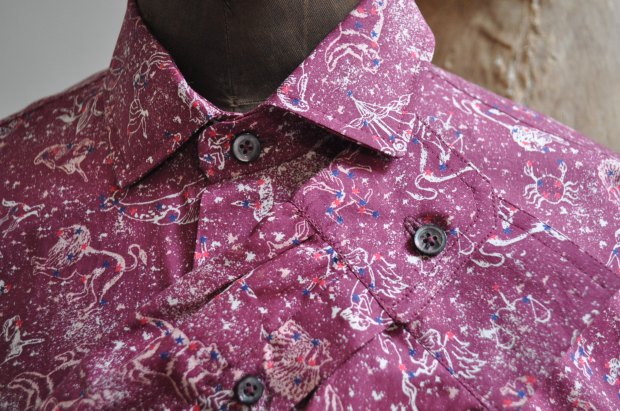 Mr. T. is so pleased with it he has asked for another one . 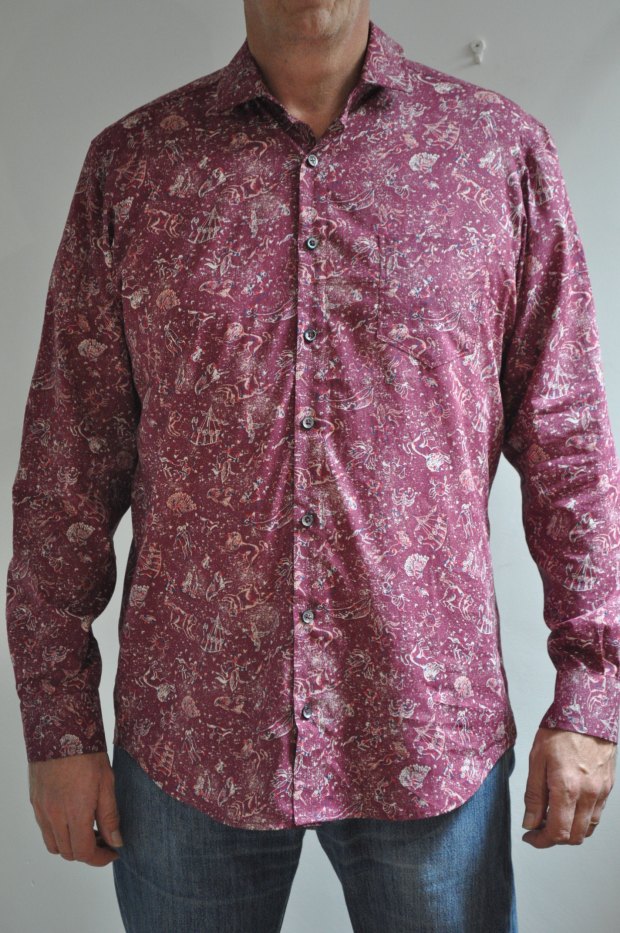 I’m not telling him the fabric design is called Kevin – he need never know.