Posted by tialys in Interesting Vintage Finds on January 14, 2012

I found some rusty old tins in a dark, dingy corner of an even darker, dingier junk shop.  I didn’t know what they were exactly but I thought they looked interesting so I bought them, took them home and started my research.  My main clue was the brand name ‘La Perpetuelle’ and what came up was a French site who had one for sale and explained that these were used by ‘Les Poilus’ in the trenches in the First World War to keep their rations in.

And I was off!

I asked Madamoiselle Tialys’s French boyfriend why the French soldiers were called ‘les poilus’ and he said it was because they couldn’t shave very easily in the trenches and became hairy (poilu).  How interesting!  I photographed the tins with a photograph of Mr Tialys’s grandfather who did fight in the trenches but was English although he may well have become ‘poilu’ too.  You should have read the  description in my draft listing for my shop – it was soooo fascinating.

Then, I was going to do a blog post about the item PLUS the story of how Grandpa Tialys was bayoneted  in the fighting and was so afraid that the German soldiers would finish him off, he lay pretending to be dead for several days, presumably without sustenance and in terrible pain.  Then, when they did find him and realised he was alive, they took him to hospital and treated him better than he could have imagined!  By all accounts, he was a miserable old sod but then, expriencing life in the trenches, who wouldn’t be? 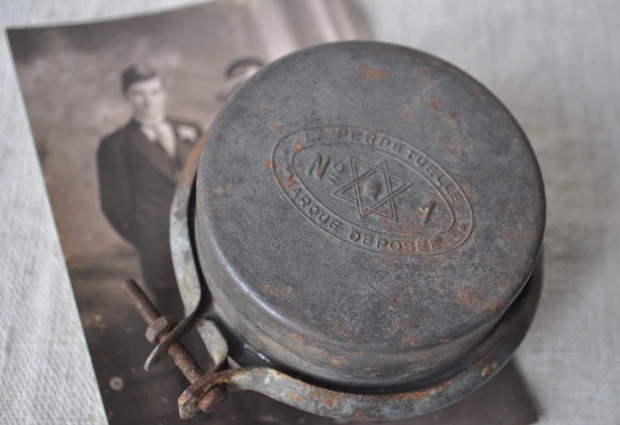 Anyway, Mr. Tialys and I were rather troubled by the method of getting into the glass jar inside the tin.  Where would you find a screwdriver in the trenches?  It looked rather fiddly for men up to their knees in mud and desperate for something to eat.  So I had another look around the internet and found somebody else claiming that these are old conserve jars dating from the 19th century which makes more sense to me and so that’s what I’m going to go with even though it’s not as exciting.

Unless you know different………………

Grandpa Tialys still got his day on my blog though!