Mostly Shirts And Sharks But Also Some Foldy Things

Posted by tialys in Arts and Crafts, Dressmaking Projects, needle felting on January 8, 2020

A Happy New Year to all and, in case you were wondering why, on my last post just before Christmas, I broke my usual habit of answering all comments, I apologise and have no excuse apart from the impending visitation of my daughters and the barely contained panic of trying to get last minute presents made before the big day.  I promise I won’t do it again – well, I might but will apologise again if I do.

Despite having the most beautiful weather over Christmas with lots of sunshine and warm temperatures, I was really lazy and mostly passed dog walking duties over to Mr. Tialys as he was home and it was nice to have a break from it if I’m honest.  Also, Zumba and Pilates classes had stopped over the holidays and I’m far too undisciplined to work out on my own at home.  Still, it’s back to normal today and it turns out I haven’t been that lazy because I do seem to have a few makes to show you. 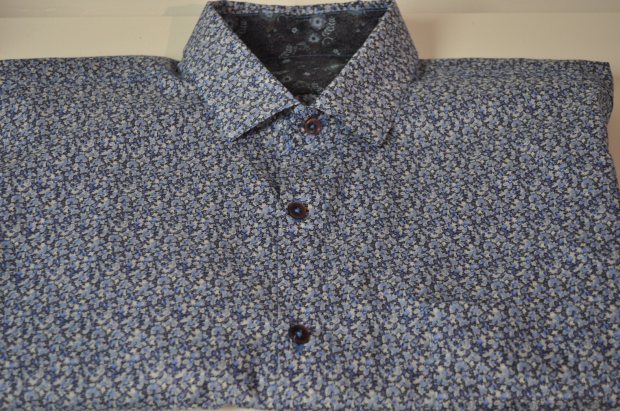 Firstly, I finished the second ‘All Day Shirt’ for Mr. T just in the nick of time for Christmas.  I fell behind with it because I wanted to attach the sleeves differently but got in a muddle so ended up doing them the way the pattern said after all.  I used Liberty tana lawn again as I had a length of this tiny floral in my stash so that’s used up a bit more ‘excess’ fabric.

Unfortunately, I didn’t get a photo of him wearing it on Boxing Day so a close up front of folded shirt (please note the contrast fabric – also Liberty – on collar facing, inside yoke and it’s also inside cuffs) and a back view worn by my antique male mannequin will have to do for the moment.  Anyway, you get the drift.

After seeing the Cheyenne Tunic pattern by Hey June on another blog, I thought it would make a nice, relaxed top to wear over leggings or jeans and I had some double gauze with gold spots on which I thought would give a sparkly touch for Christmas.

You can see the gold dots more clearly if you click on the photo and they did make the top a bit more ‘festive’ but it meant the construction was more difficult than it needed to be as pressing the fabric had to be done very carefully in case of gold dot meltage (possibly a made up word).  I like the pattern and the only alteration I made was to make the sleeves slightly bell shaped as I didn’t want the turn back sleeves with tabs or the long sleeves with cuffs on this occasion.  I was going to gather the ends of the sleeves at the wrist but decided against that in the end (I told you I was lazy).  I will make it again in a different fabric as I like the neck and placket closure and the general overall shape.

So, both daughters were home for Christmas and Mlle. Tialys the Elder and I were keen to make ourselves a pair of workout leggings from a new pattern I’d bought – Virginia Leggings by Megan Nielsen – for a bit of mother daughter bonding while we weren’t watching Christmas films, playing board games, scoffing festive food or arguing with our sister (!).  Obviously that last one was not me as my sisters weren’t here although, if they had been, I probably would have argued with them.

Unfortunately, this is not me either.

I did make myself some of these too but, trust me, this is probably the photo you would rather see.

The fabric, bought online,  came as a bit of a shock – I thought the sharks were going to be tiny and barely recognisable as sharks but, as you can see, that wasn’t the case.  However, in a way, it’s better because you don’t get that many full sharks to the leg (a sentence I have probably never said before in my life and probably won’t ever again).   Certainly it’s true in my case as I’m short and also I cropped the legs of my pair to mid calf length.  We did try to be careful not to get a shark disappearing up front or back crotch piece.   Anyway, the fabric was a bargain and I bought it so we could try out the pattern for size and I’m grateful to Mlle. T. the Elder for so thoroughly testing them out for me so that at least I know my seams should contain me during a squat, or worse, a down dog.

I saw, on Anne’s blog, that she had been doing some book folding and, as often happens with me, I was immediately inspired to rush off and try it out. I decided to re-purpose a couple of very old, never looked at books into Christmas trees – one was a cookery book for ice cream dishes (never going to happen in this house) and the other had a lot of very nice vintage style black and white illustrations from which I made the one on the right below and another one as a gift.  There was a fourth one too that I made as a last minute present for a friend on Boxing Day  – and so I also got to be a dab hand at five pointed origami stars. 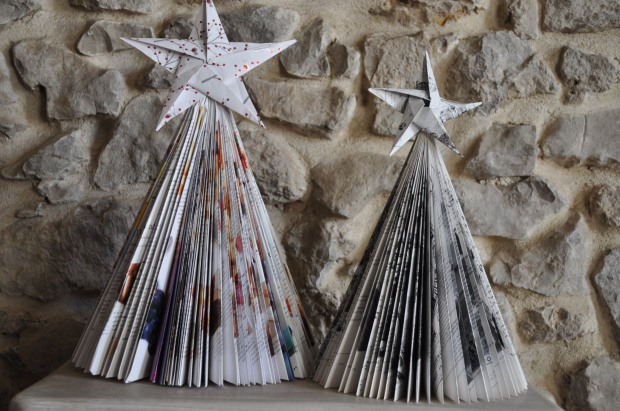 Of course I had to investigate further and ended up nearly ruining my hands for all time by folding an old paperback into an angel as one does.

This may have been a step too far as it took me ages and, in a search for a suitable angelic topping, I stumbled across a ball of gold tinsel yarn I bought at some time for who knows what and made a pompom for her head.  She sheds little gold sprinkles wherever she goes so I might think about a different head next time I unpack the Christmas decorations.  However, that will be the first and the last angel body I’m ever making out of a paperback.

I also did a lot of crochet work on the border of my Nature’s Walk CAL blanket but obviously not enough or I’d be showing it to you now.  The deep border seems to be never ending but I’m pretty sure it’s going to be worth it in the end.  Lots of the other people who did the CAL enjoyed it so much they started on another one straight away – that is probably (definitely?) not going to happen in my case.

So, not too lazy really and I have also started a new hobby in a fit of madness but mainly in a quest to get Mlle. Tialys the Younger interested in some sort of craft.  Progress (or lack of)  will be revealed next time.

In the meantime, against all the odds, let’s hope 2020 will prove to be a good one for everybody, everywhere.