Posted by tialys in Arts and Crafts, Dressmaking Projects on May 10, 2020

Just before the lockdown started and I lost my dressmaking mojo I completed this Cheyenne Tunic from Hey June Patterns.

If you think it looks familiar and you follow Love Lucie, you are right.  She made a monkey one too in a sort of burnt orange colour and, although I admired it and had already made the pattern up once myself in a double gauze fabric, I had no plans to add monkeys to my wardrobe.

Then I went shopping in Toulouse – aah, those were the days – and saw the same fabric in both this golden yellow colour and a dusky pink.  So, despite the fact that I probably wouldn’t have paid it much attention in the normal course of events, I recalled Lucie’s lovely version and felt it was fate and had to buy some.  My friend advised against the pink as she said it didn’t do me any favours.  She was actually more specific than that but suffice it to say it was enough to make me decide on the yellow and feel vaguely depressed about my complexion.

Shortly after I’d finished it we went into lockdown and it just sat forlornly on the mannequin.  Well, as forlornly as something yellow covered in monkeys can look.   So I lost my dressmaking mojo.   The only thing I thought I might do, as I had the pattern, denim and all the trimmings already purchased, was make another pair of jeans.  Luckily, this idea was superceded which is just as well as any jeans I make now will, hopefully, be too big for me when Mr. Tialys is able to go back to work in the U.K. and leave me to resume the minimal feeding/drinking/baking I usually employ when left alone and don’t have a six foot four male to take into consideration.

Last year I made a clutch of summer dresses and don’t need any more.  In fact, I instructed Mr. Tialys, and anybody else who will allow me to give them instructions, not to let me make any more summer dresses.

There was a pattern that caught my eye though.  It had 20% off.  I knew I already had some fabric that would be perfect for it.  I often ignore instructions even when I’ve asked for them.  So, I bought the pattern even though that same honest friend told me the style probably wouldn’t suit my shape as it has a fitted bust and high waistline so would make me look ‘all bosom’.   This time, I didn’t let her sway me although I decided to make the dress a size bigger than usual forgetting that, when I do that, it usually fits me round the bust but is too big everywhere else and I lowered the waistline forgetting that I have quite a short waist so a high waist drafted for a normally waisted person is not high on me. So then, I had to do alterations which I hate with a passion.

I took the shoulder seam up which hoiked the waist up but also the darts so I had to shorten them.  Then I had to alter the sleeve armscyes so they would match up.  Then, there was too much ease in the back because, a) there should be ties on the back of the dress which I don’t like so didn’t add which meant the ease was sitting there not being used and b) I’d made it too big for me anyway.  So, I added darts in the back.  It’s practically a whole different dress!

Having faffed about with the pattern to make it both fit and suit me, I thought I might as well make another one and, this time, I would finally get around to learning how to do an FBA (full bust adjustment) so that I could make the smaller size I need but accommodate my embonpoint as the French so delicately put it.  This is yet another valuable skill I now have thanks to lockdown.  Some of the others are choosing really bad films to watch on Netflix and not realising how bad they are until halfway through, becoming very discerning about how dark dark chocolate needs to be before I will eat it and how to avoid cooking/dog walking/shopping whilst having somebody else in the house who will do it instead.

Anyway, with FBA skills now in hand, I proceeded to make a sleeveless version of Megan Nielsen’s Darling Range dress – for that is the pattern of which I speak – in some other fabric I already had and, although it is pink, it is brighter and has a lot of black in it so will not hopefully have the same effect as the pink monkeys. 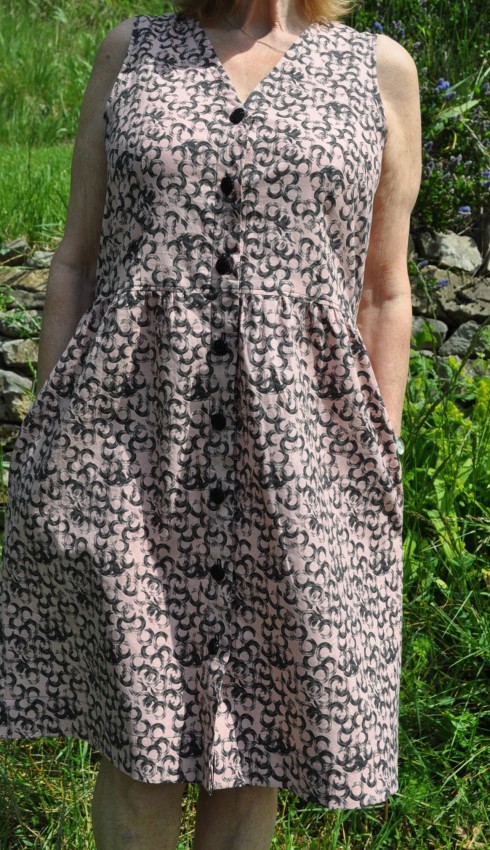 I still added back darts rather than use a tie on this version .  The sleeveless hack requires some bias facing which I did in the same fabric. 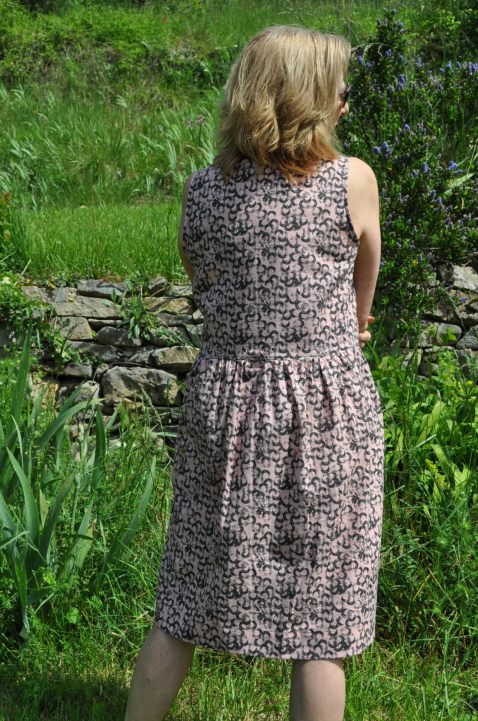 Some restrictions are supposed to be lifted here in France as of tomorrow.  At the very least we are not going to need a permission slip – filled in and signed by ourselves 🙄 – to leave the house and, although the ‘ladies that lunch’ lifestyle that a lot of people fondly imagine I enjoy, won’t be resuming any time soon, at least I’ll have dresses for when it does.

And monkeys of course.

Have you used your time in lockdown to learn any new skills?