Posted by tialys in Arts and Crafts on January 6, 2011

Well, I’ve put the Christmas decorations away, I’ve said ‘Happy New Year’ to as many people as I possibly can, bought things in the sales  and  booked my holiday (joking about that last one) so, what’s next?   Ooh! It must be Valentine’s Day.  I’m not one to be caught unawares so here are my offerings so far.

That is not a giant mouse, bigger even than an owl, just a trick of photography!  The 4th picture is a view of the reverse side of one of my hoops – I’m not normally so philosophically spare with words!

I can’t tell you how much fabric I’ve got stashed away but, strangely enough, when I decided I wanted to get started on making a quilt for my daughter’s 18th (well over a year away but I don’t want to rush it!!), I decided I didn’t have anything quite right.   I want to make something she’ll like now but also in years to come.    She likes the fabrics in this jelly roll and says they will also remind her of me – bless! – so I’m going to use those with this panel from the same fabric range in the centre.  I’ll decide on the backing and quilting pattern later. 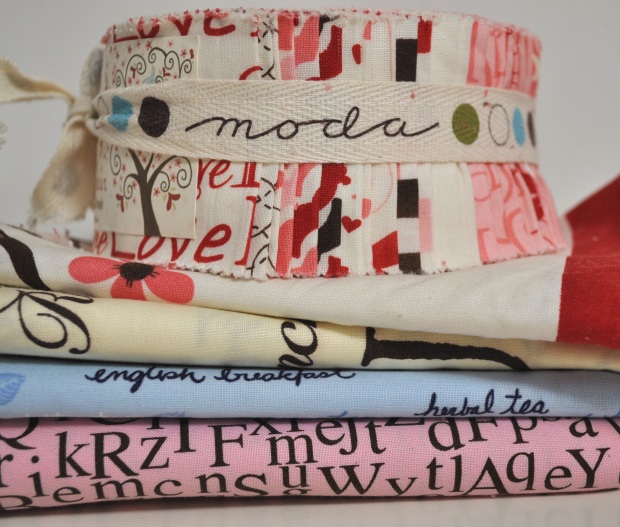 Jelly Roll and Others

The three fabrics on the bottom are nothing to do with the quilt but I can’t resist a bit of text so ordered them at the same time!

Posted by tialys in Arts and Crafts on January 3, 2010

Well, hello Blog and Happy New Year! I feel as if I’ve been away for ages but I guess it’s only a couple of weeks ago I last posted anything. 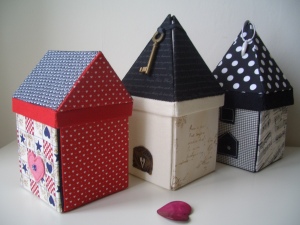 Anyway, I’ve had my parents over from the U.K. for Christmas so my visits to the computer have had to be curtailed as blogging is not the most sociable of activities – at least, it is, but not when people are actually visiting you.  They were actually supposed to be here for Christmas Day, coming over on 22nd December but the snow in the South of England brought the country to its knees and their flight was cancelled.  The first flight available then was on Boxing Day so, not too bad, and then they changed their return flight (otherwise they would have met themselves going back!) and were here to see in the New Year.

However, I did manage to escape to my ‘lady shed’ a few times to try out a new project.  I let my mother in as she had bought some crochet work with her and, after moving yards of  Christmassy fabric out of the way, discovered I have a sofa in there and she could sit down and do that while I got on with some sticking and cutting and sewing.

I have had quite a few requests for instructions to make my étui boxes and this is something that I am going to give some thought to.  The design for the hexagonal box is not mine so I can’t do that but I designed the small one myself and may well get round to writing out full instructions, with photos, etc., in the next couple of weeks.  I may do it as a pdf file or I may do a little kit with the card already cut – can’t make up my mind.  Once I’ve written it, I’ll have to find a willing friend to make a box, following the instructions, so that they can report back to me on the clarity of my directions.

Once I sell the instructions or kits, I will expand upon my original idea and make some slightly different étui boxes.  These will be in the shape of little houses, each one different.  I think I’m going to call them Little Housekeepers as that sort of gets over the idea that, not only are they an ornamental item in the shape of a house but you can keep things in them too!    I made one for a friend for her Christmas present – she was my guinea pig (thanks Anna!) – and she seemed to like it so off I go.

Here is my first one (or second one if you count Anna’s) and it is all black and white and has musical notes – can’t think of a name yet but it will be something musical – could be ‘The Piano House’ or ‘The Musical House’ or something along those lines, haven’t decided yet but it will come to me in a flash as most things do.  Hope you like it. 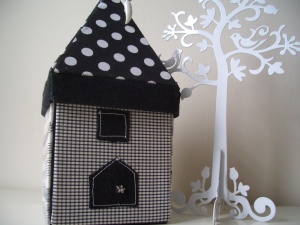 A Little Housekeeper in Black and White

Just finished ‘The Love Shack’.  I designed a new gable ended roof for this one (well, o.k. my husband did all the calculations but that’s surely the easy part).

The House of Romance