Posted by tialys in Arts and Crafts, Life in France, Life in General on July 23, 2012

I can’t believe it’s been a whole year since this post where I told you about going to see Bryan Ferry in a castle.  But it is.  So when the Festival de Carcassonne came around this year I studied the programme and tried to decide who to spend my hard earned on.  I was sorely tempted by Duran Duran mainly because I used to be a bit in lust with John Taylor and I know all the words to their songs – please don’t judge me.  Madamoiselle Tialys the younger is going through a goth/emo/black clothing period and wanted to see Marilyn Manson and I am afraid to say that I made Mr. T go with her as I couldn’t bear the thought even though we are linked in a ‘my brother used to go out with his cleaner’s second cousin sort of way’.  Well, his ex-wife has one of my vintage French finds in her Paris appartment – the buyer name dropped and told me she had bought it for her as a birthday gift.  I digress.  Johnny Hallyday was definitely out for reasons I shouldn’t have to explain to lovers of good music so I settled on Gossip and made the other Madamoiselle come with me.  The charismatic front woman has the most amazing voice and, if you don’t know them have a look here. 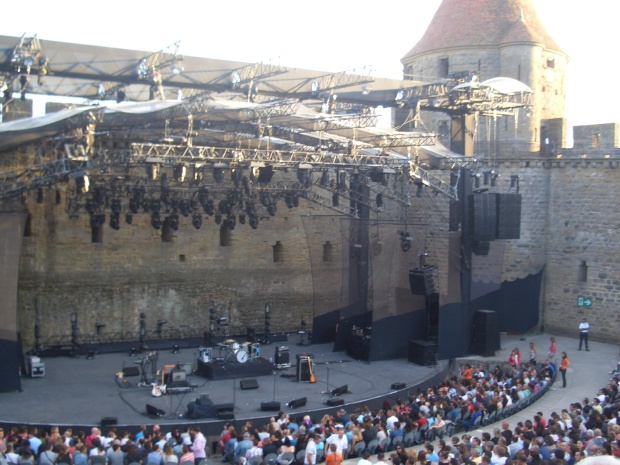 This is the gorgeous setting but, as I was not in charge of the camera, we didn’t get a good shot of the band once it had got dark so here’s a pic of the lovely Beth Ditto from another source. 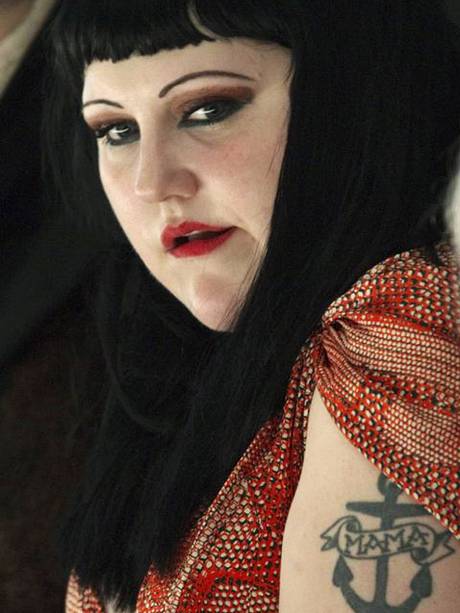 Amazing show – the weather was faultless (it’s  outdoors you know!) , it was packed and there was a great atmosphere.  Definitely made the right decision.  Mr. T. is still recovering – although mostly from the support band and not Marilyn Manson, it’s fair to say.  I love the French.  Maybe I don’t get around enough but, is it only here that they offer the audience free earplugs?  Mlle T. the elder says her (French) boyfriend tells her off for not wearing them at concerts because, if you don’t, your ears will bleed.  This is something that has never happened to me.  I did notice, however, and it wasn’t difficult as the free earplugs were in garish shades of fluorescent yellow, orange and green, that everyone took them out once the support act had finished.  A bit harsh I thought.

Whilst walking around La Cité  (I’m not being pretentious, that’s what it’s called) before the show I felt compelled to get a photo of this little chap peeping out of a shop because, even though I am not a fan of Yorks (as they are called here) I thought he looked cute with his red streak against that lovely pink door. 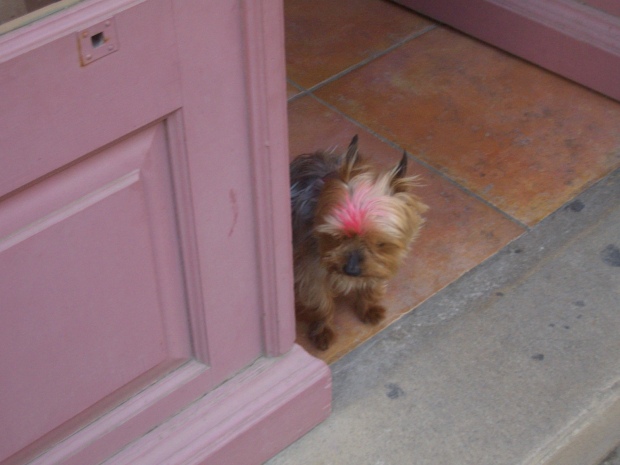 After getting home around 2 a.m., I made the valiant effort to get up at a decent hour the next morning for a local vide grenier and my efforts were rewarded with some interesting finds 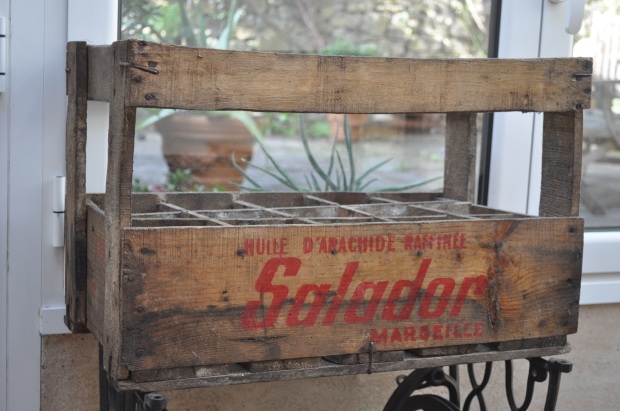 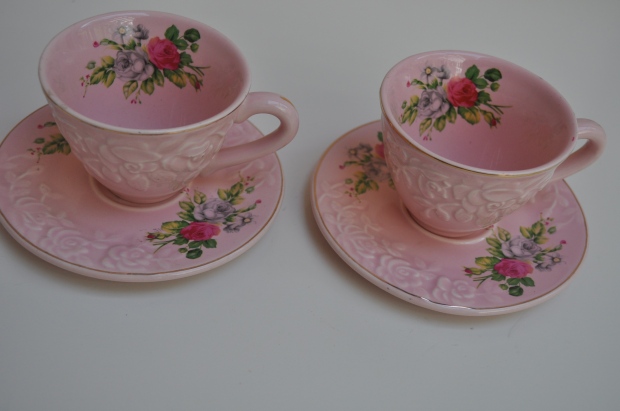 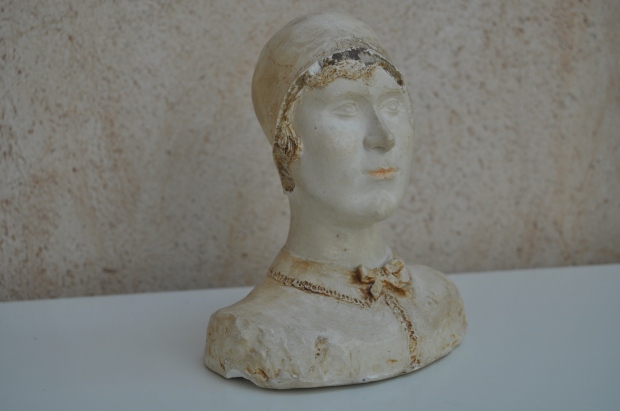 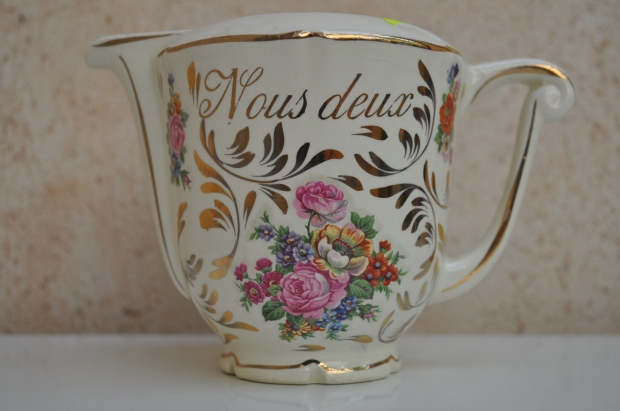 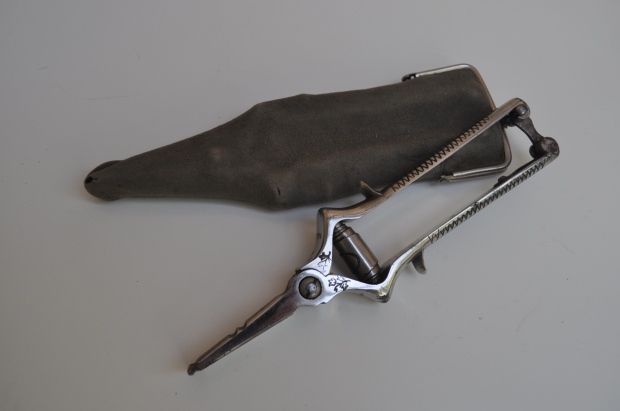 I have to freak you out with the last object.  I was drawn to it because it came in its own little ‘étui’ or case and I asked the stallholder what it was and she said a meat tenderiser.  I thought it was a little strangely shaped to bash a piece of steak with so I did some research and I believe it is a ‘masticateur’ and was (or is) for old people , usually, who have trouble with their teeth and can’t chew meat up properly.  This thing apparently effectively does the job for them.  All well and good but you wouldn’t want to be in a restaurant with somebody and see one of these come out would you?   They’ve made an effort with it though, haven’t they?  Look at the little flowers engraved on it.

After all this I found time (by not doing the housework or ironing) to complete another block of my sampler quilt I am making with my little group.  I am afraid that I have cheated and made a couple of them by machine.  I know I said I was going to hand piece them all but I am impatient and have other things to get on with.  Also, every week when I go to the group, the other two have got ahead of me and I am supposed to be the ‘teacher’ so I needed to put a bit of a spurt on.  I am only making a quilt to drape artfully over the back of the sofa (so the cat can sit on it probably) and will just need 12 blocks.  Here are the first 6.  Please don’t zoom in and be critical of my points and joins – I know they are less than perfect but it really will probably just get sat on by the cat and won’t be an heirloom or anything so I am not unpicking as I might normally do (she lied.) 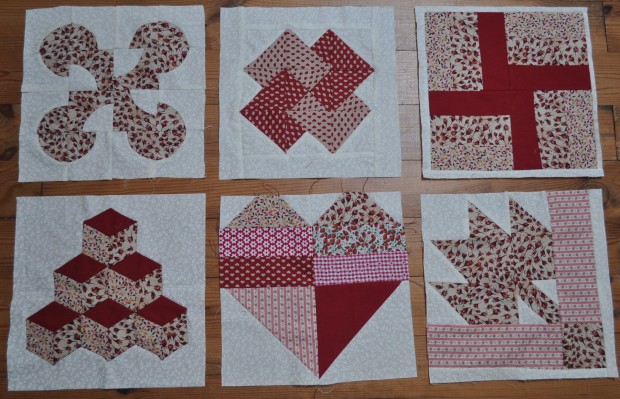 and, no, I haven’t finished my daughter’s 18th birthday quilt yet and she will be 19 next month and leaving to go to university the month after that.  I really, really must get it finished.  I’ll get on to it tomorrow – honest!