Posted by tialys in Arts and Crafts, Knitting Projects, Life in France on May 8, 2015

I know I’m English and we call pants ‘trousers’ but I do like a touch of alliteration and I have some readers from the States so, if you thought this was going to be about  men’s knickers, sorry to disappoint.  The reality is much less exciting I’m afraid, being more concerned with knitted stuff so there you have your heads up and can leave without anybody ever knowing you were here.

Here’s a very French village photo for you.  It is my lonely stall set up outside the Mairie (town hall) a couple of weeks ago.  It does look like I’m Billy No Mates but, inside there were lots of other stalls raising money for Dog Rescue Carcassonne.  I chose to set up outside partly because it was a lovely sunny morning and partly because I had to leave early to take my Mum back to the airport so I sold a few dog collars and bandanas and said my goodbyes without creating havoc inside amongst the other stalls.

So, when my Mum visits, I knit to be more sociable and generally only use the computer or sew when she is catching some ‘Zs’ which is fairly often these days it has to be said.

This is my second completed humungus cable blanket.  It is a subtle, flecked duck egg blue but I couldn’t, for the life of me, get that colour to come out properly in the photograph so it looks much more like a light grey, which it isn’t.  I did try – I even turned off the ‘auto’ setting and dipped into the realms of manually setting the aperture and all that scary stuff .  Any photography tips on how to tackle this sort of problem would be gratefully received. 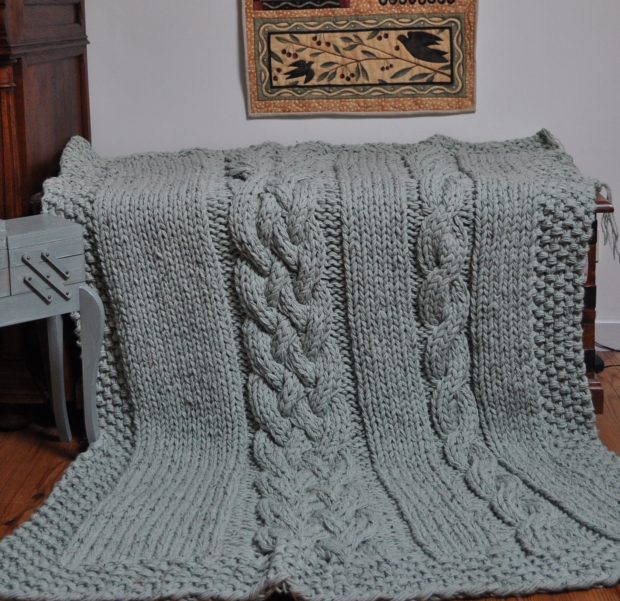 I love this blanket so much.  I’ve already ordered enough yarn to make another two which is a bit mad because, now the summer is starting to kick in, I shall probably die of heat and suffocation under more than 2kg of wool.

This light and airy baby blanket, on the other hand, is made using the same size needles – 20mm – but with only one strand of yarn rather than six strands, as used in the humungus one, so it is more ‘summer friendly’.  Having no babies any more, I had to use this bear as a model.  I could have used one of my baby mannequins but they are far too creepy – the bear looks cuter, trust me.

To supplement my dog collars and bandanas range, I thought I’d have a go at knitting some dog coats.  I know it is the wrong time of year but you know how quickly the year passes and soon it will be time for those who like or need to put a little jumper on their dog to do so again.

This is James C. Brett Marble Chunky and it is great to knit with and comes up with some lovely colour variations.  The grey one at the top has been a little overshadowed by the lovely, rust and teal tones of the one beneath but it is still smart and for the less ‘showy’ dog about town.  My problem is, I made these two versions in a ‘medium’ size and my own dogs are larger than that and nobody I know has ‘medium’ dogs – only large or small.  I feel like taking one out and about with me and, when I see somebody with an appropriately sized dog, ask if I can put a little knitted coat on their pet and take a photo.

Anyway, Flo, having graciously tried on the grey coat but finding it a little snug, continued with her collar modelling and, although this photo was no good to show off the collar, as it wasn’t properly in focus, it’s such a gorgeous one of her I had to include it anyway.

You’re probably past caring by now but, just in case you were wondering about the title, I no longer have any excuse not to get started on a pair of trousers (pants!) for my daughter.  I have the pattern, I have the fabric, I have the zip.  It’s just that I’ve never made trousers before and my daughter is not a ‘standard’ size and I suspect I might be better at procrastination than pants making.