Posted by tialys in Arts and Crafts, Crochet Projects on August 6, 2018

Hot yoga is a style of yoga performed in hot and humid conditions.  I prefer doing the cobra and down dog in an ambient temperature so I thought I’d indulge in a bit of Hot Crochet instead – I might patent the name ; ).

I did use my yoga mat to block a blanket though – does that count? 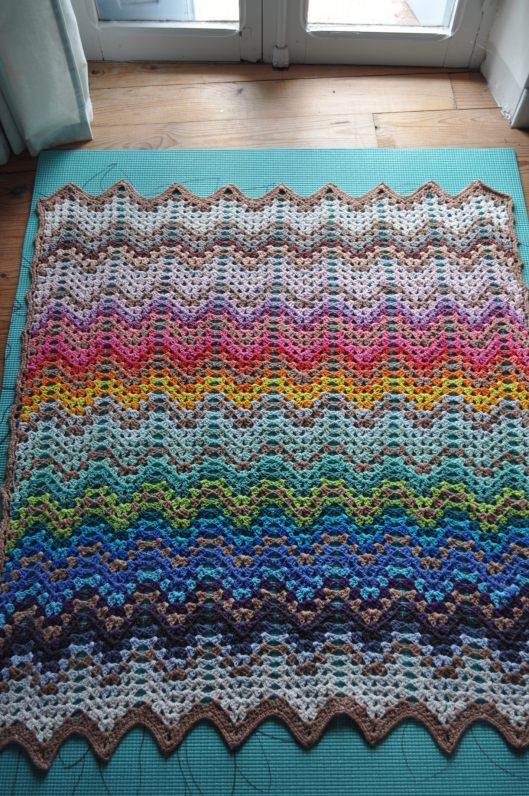 This is the second version I’ve made of Emma Varnam’s Little River Blanket which I originally made with a lovely collection of 10g balls of Scheepjes River and Stone Washed yarn, bought as a kit from Black Sheep Wools.

It was fast and enjoyable to make so when I saw these little packs of  8 x 10g cotton yarn for 1.75 euros each in our local discount store, I thought I’d make it again.  I had some Rowan cotton yarn in my stash which I’ve had for years so used that for the ‘every 5th row’ colour and the border. 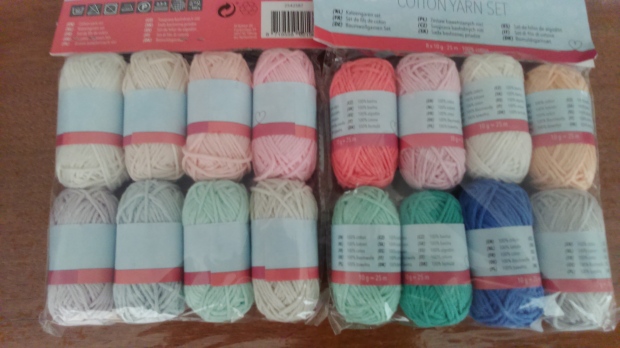 Being 100% cotton it wasn’t too uncomfortable a Summer make and I laid out all the colours I sourced in order to make the same sort of graded effect achieved in the original.

If I’m honest, the feel and texture of the Scheepjes blanket is softer and more luxurious because it has some acrylic mixed in with the cotton but the cost of the 100% cotton blanket was significantly less so……. 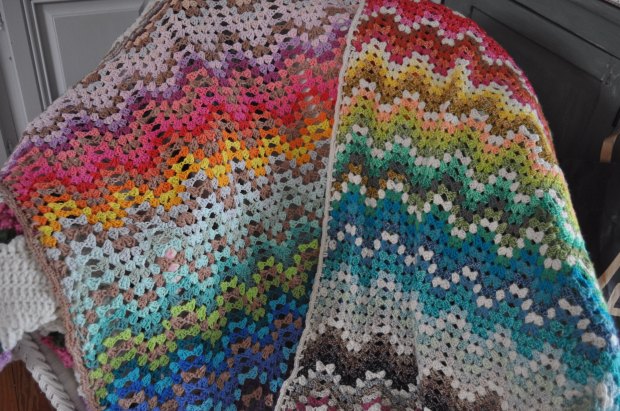 When I read other people’s blogs and see something I like, I tend to go off on a tangent and get enthused about a project even when I’m already knee deep in others.  So, when I read Pauline’s (aka The Contented Crafter) about large crocheted mandalas as wall art, some white metal hoops were only a few clicks away.

We have a long, blank corridor and I thought a selection of 45cm and 35cm colourful mandalas would look good against the plain wall. 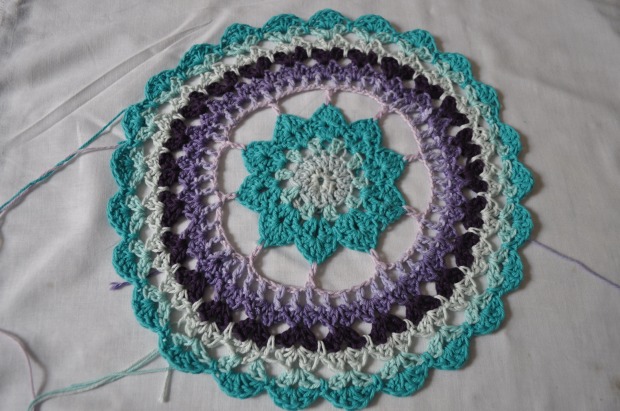 Before the ends were weaved in and a light steam press.

I used Lucy at Attic 24’s pattern called ‘Positivity Mandala’ but added a couple of extra rounds to get it up to the required size for the hoops I bought. (free Mandala pattern here

As you can imagine, I have lots of cotton yarn scraps left from the stripey blankets above – you might remember I recently asked for ideas about how to use them.  The mandalas provide an excellent way of using up those 10g balls of cotton – at least in the centres.  The rest of the yarn is from the range by Paintbox DK of which I have a vast quantity having bought a huge pack of the entire colour range some time ago when it was on sale at a bargain price. 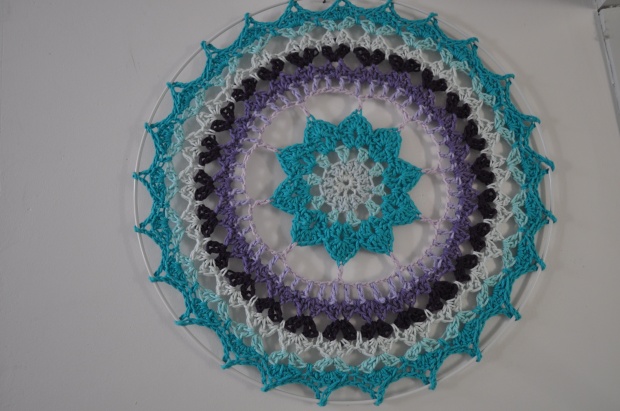 The jury – aka Mr. Tialys – is still out on whether he wants these as wall art in the corridor and, anyway, I wouldn’t have used these colours for there but I did a practise run in the bedroom where the colours go very nicely and I’ve since hung it in the entrance to my workroom. 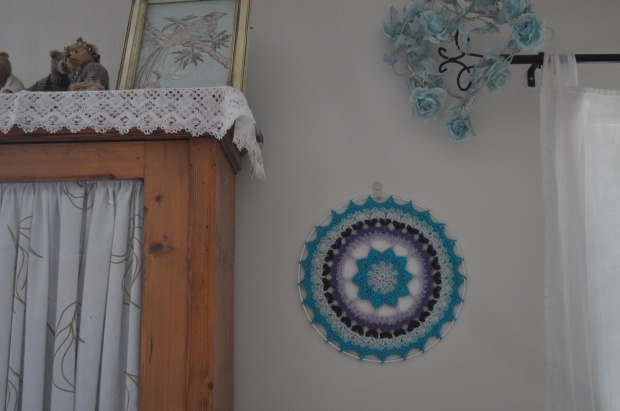 I’ll keep you posted if I’m allowed to make any more.

I can’t recall whether I showed you this little chap.  He’s supposed to be an English Bull Terrier which, if I were to ever actually go to a breeder and buy a dog (which I won’t) this would be the breed I would probably choose – that or a German Shepherd (although, sadly the latter are generally two a penny in the refuges). 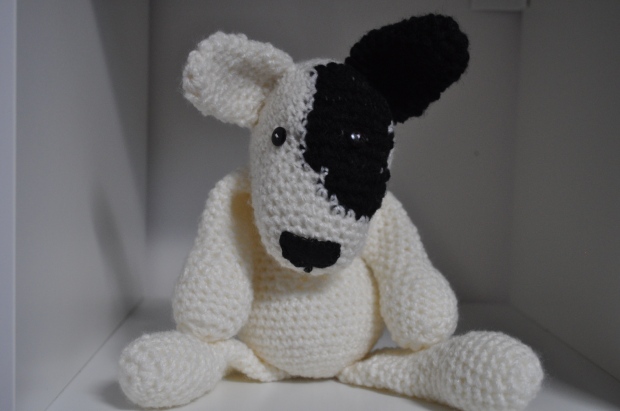 I found the patch a little difficult and I’m not sure whether it’s possible to blend black and white a little more efficiently than I have but I think he’s cute anyway.

My sister has a West Highland Terrier called Harvey and this is my rendition which will be posted in the next few days as a gift for her birthday. 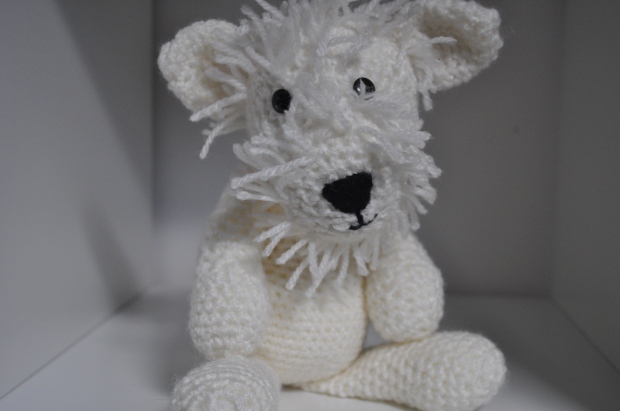 I had never done loop stitch before so the head has been waiting to be finished until I had time to sit, hook in hand, in front of a YouTube tutorial.  I was worried I might not have made the loops long enough but she keeps him fairly well clipped anyway as she lives in Spain so I think it will be O.K. 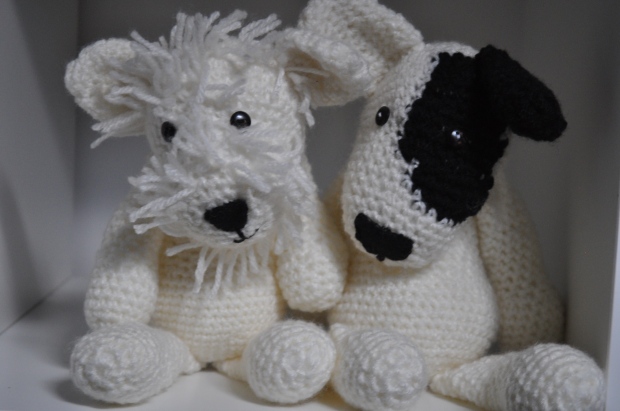 Seems a shame to separate them really.

Right, now the yoga mat is freed up, I suppose I could do a few planks, shoulder stands and warrior poses.  On the other hand, it’s a bit too hot.