Posted by tialys in Arts and Crafts, needle felting on June 28, 2020

As I haven’t done a post for a while, I thought I’d just drop in to show you my latest needle felted portraits which are both of collie cross type dogs.

The first one is my girl Flo.  She has many expressions and this is just one of them so I will probably do another one of her looking sly and another looking ashamed, the latter look generally following closely behind the former. 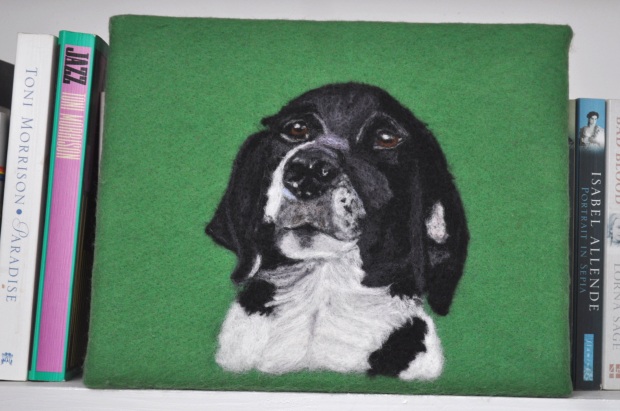 I bought some brightly coloured felt as a background for this one but, even though it is easier to needle felt on to, I think I prefer the more ‘arty’ look of natural linen.  I’m not completely sure though so coloured felt could still figure in future portraits.

My sister in law sent me an e-card last week which was an animated version of her new young rescue dog wishing me a happy birthday in, what I imagine is my SIL’s voice slightly distorted to sound as if she’d taken a lungful of helium. Either that or she has a rare talking dog.   As it’s her birthday in July I thought I’d take a screen shot from the card and do a portrait for her birthday as a surprise.

So, here’s my version of Callie. 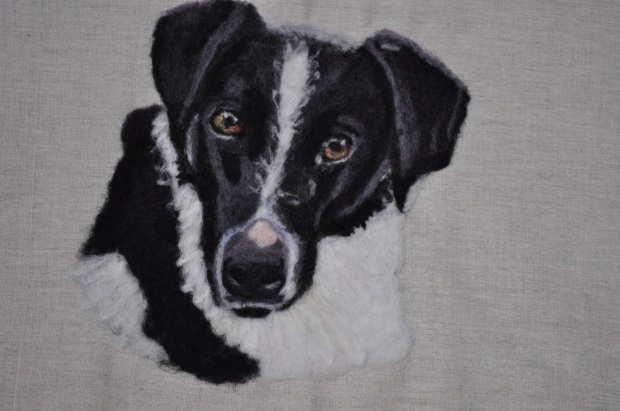 I need to frame her but can’t decide whether to use a large embroidery hoop or a deep frame.  The hoop will be a lot cheaper to post as Mr. Tialys is still stuck in France so can’t be my mule for items I want taken over to the U.K.  – nor indeed items I want brought over from the U.K. – but, so far, I’ve been waiting since the beginning of May for some hoops I ordered to arrive so it might be a frame after all.

Do you prefer the felt (doesn’t need to be green) or linen look?

Posted by tialys in Arts and Crafts, needle felting on May 23, 2020

Remember my first forays into 2D needle felting and, in particular, dog portraits?

I thought you might like to see how I’ve been getting on since I started at the beginning of February.

My dog Stan was my first go but I could see room for improvement.  Which was just as well otherwise why pay for a course? 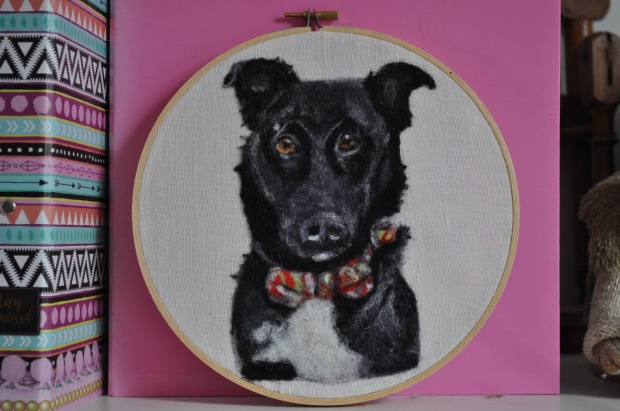 The next one I did was a Trailhound.  I don’t have a Trailhound, and don’t know anybody who has but the photo was in the course for us to use as a practice piece for a smooth coated dog.  Even though he was only my third go – I did a practice Jack Russell too which I showed in an earlier post – I think he’s still the best thing I’ve done so far. 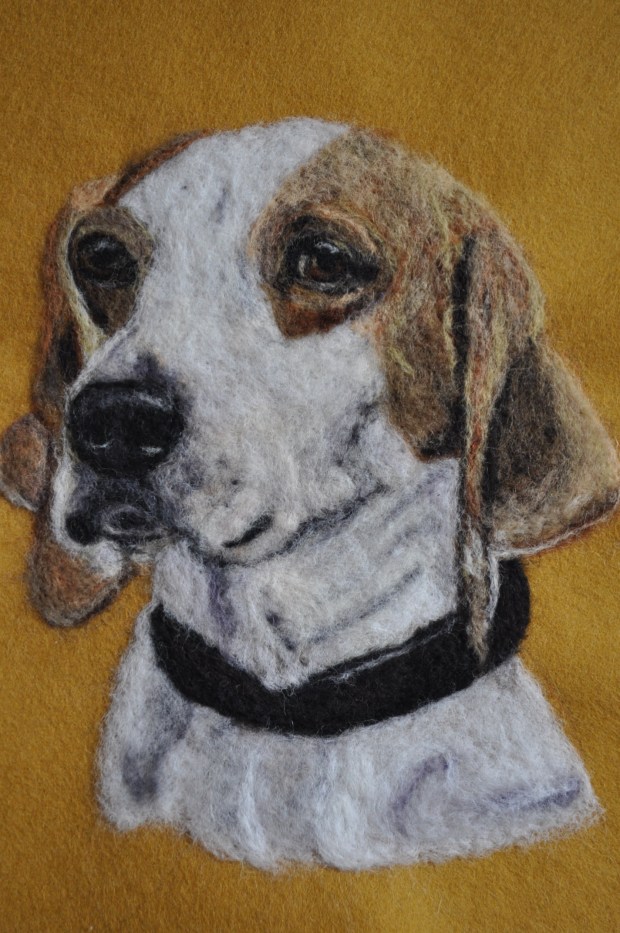 I was really pleased with him and the practice will come in handy for when I do a portrait of my girl Flo as she has a similar look.

Next I did another practice piece, copying the Lhasa Apso photo on the course to try out a longer haired dog as I wanted to do my sister’s Westie for her birthday. 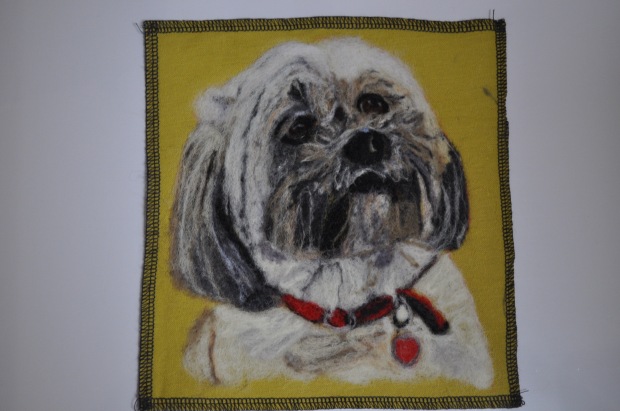 The long hair was difficult but I think I made a passable portrait and I was pleased with the collar.

We lost Phoebe, our lovely German Shepherd back in 2013 and I didn’t have that many suitable photos of her to copy but I used what I had and I’m quite pleased with the result. 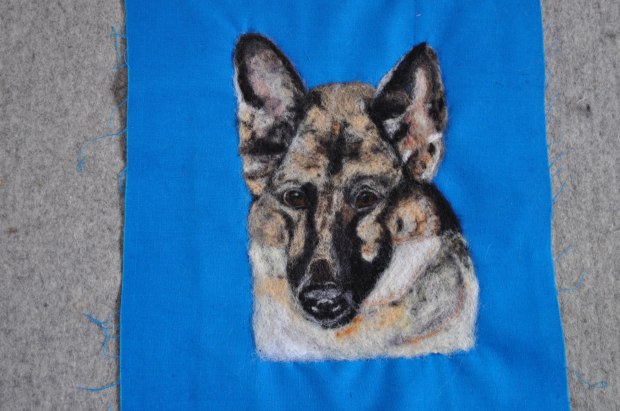 I’m sure those of you who paint will already know how many different colours are present in things you previously thought of as comprising only a few.  I used so many colours of fibre in those ears and, close up, I thought it looked ridiculous but, once you stand back, it all seems to work.

Then it was time for the Westie.  He’s called Harvey and my sister adores him so I wanted to make my first portrait for somebody other than myself a good one. 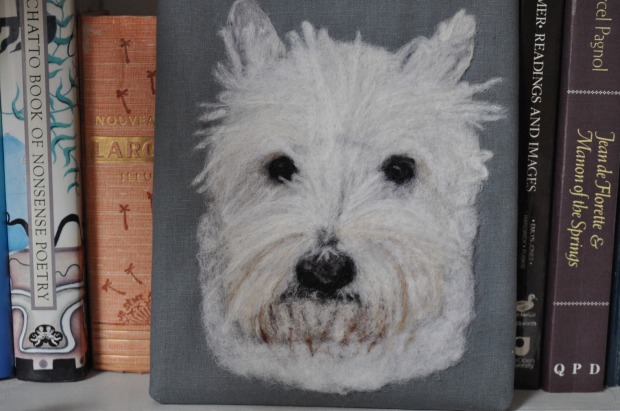 Again, the long hair, going off in all different directions, was difficult but hopefully she’ll be able to recognise her beloved fluff ball.  To be honest, I think most Westies look the same but I’m sure their owners don’t think so.

I won’t be framing my practice pieces, but for the others I found some good frames in Ikea which are perfect for textile art because you can sink the image quite a way down from the glass.  At least it was glass when I bought this one to frame Phoebe but when I ordered another four of the frames online the glass had been replaced by some sort of polycarbonate. 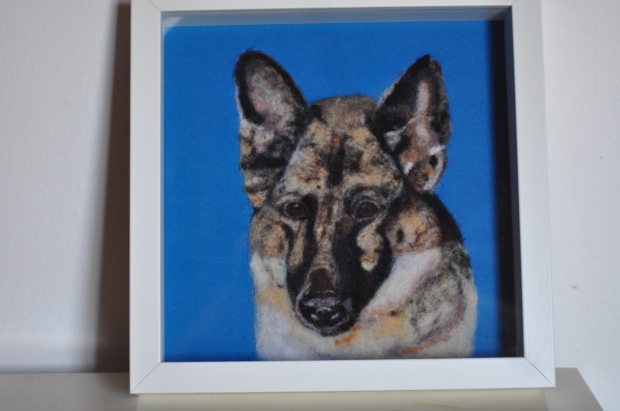 I still think they are good though and very reasonably priced if you are thinking of framing any textile work.  The model is called Ribba, they come in both black and white and they cost about 7 euros.

Next up, will be my beautiful Flo 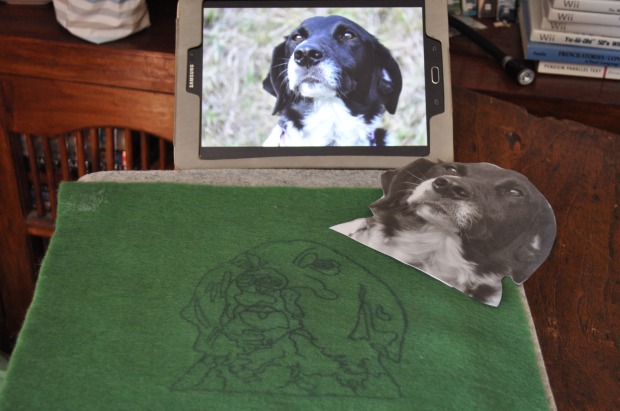 I’m still really enjoying myself with this and working with lovely pure wool fibres is a treat.

Thank you for visiting my gallery.

Posted by tialys in Arts and Crafts, needle felting on February 4, 2020 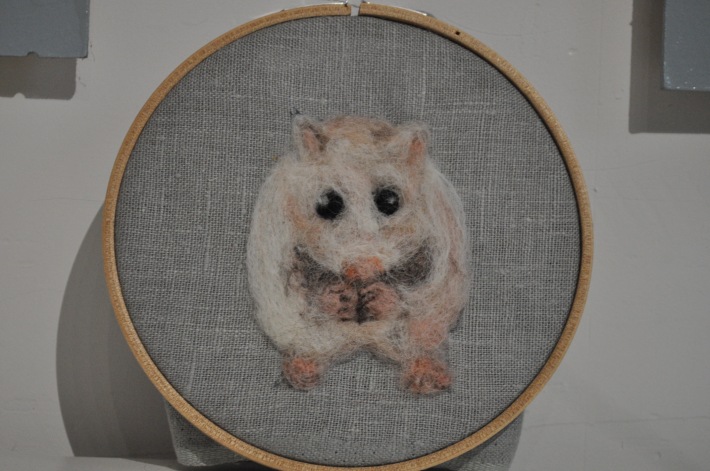