It’s All Coming Back To Me

I’ve been a bit wrapped up in making clothes lately but now that I’ve started making a quilt I’ve remembered how much I love it – or at least the construction stage.  The swearing and the gnashing of teeth don’t usually start until the quilting stage.

Remember I’d decided to use a Moda jelly roll in French General’s ‘La Petite Ecole’ design ?  I just couldn’t wait to get those triangles cut but I didn’t have a 60 degree triangle ruler – the shop was shut (well, this is rural France) so I made a template.  I made it wrong 😦  So, I had to throw away the first set of triangles I’d cut with it as they were on the wonk  which meant three strips gone from the jelly roll.  So, I made another triangle template and, this time, I concentrated.  Plus, I had made it in strong template plastic so my rotary cutter went right up against it.

I couldn’t resist arranging them into the hexagons they will become.  Unfortunately, I’m not the greatest matcher upper of seams and points so this may be as accurate as it gets.

Aah, patchwork, how I’ve missed you. 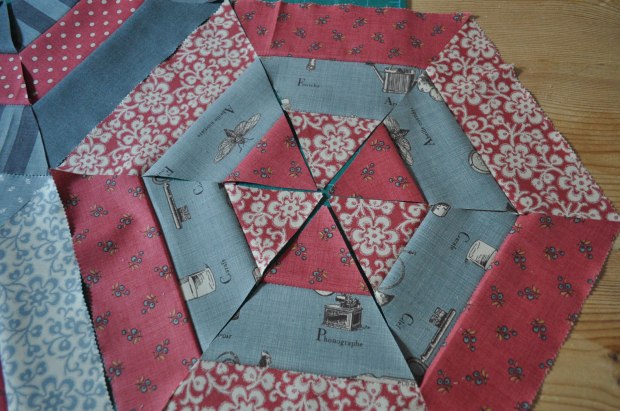 I know, I know, I’m supposed to be concentrating on the Outfit Along and making a dress and knitting a cardigan.  Well, I’ve got up to here with the dress –

and, as the view of Simplicity 1803 that I’m making has four buttons on the bodice, I decided to make some covered ones

I’ve decided I might not be cut out for these sew alongs/knit alongs/outfit alongs.  I’m far too impatient.  The sewing blog is talking about choosing fabric today and I just want to get on with it – I think the actual sewing bit isn’t even going to start for another couple of weeks.  I like to find sew-alongs long after they’ve finished, when  I’ve done a search for a pattern I’m having problems with and can find the help retrospectively, if you know what I mean.  This ‘real time’ business might not work for me.  Still, I won’t say too much as I’ll probably still be knitting the cardigan long after everyone else has finished.  We will see.  At least it has made me make the dress I’ve been meaning to make for over a year now.