Posted by tialys in Arts and Crafts, Patchwork and Quilting Projects - General on April 11, 2020

Even though, due to the current worldwide situation, our international block swap – Footstyle Freestyle (F2F) – has had to adapt this time round, we are still determined to go ahead with it. 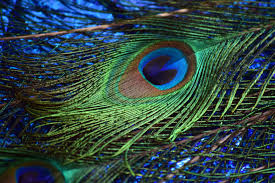 Instead of mailing out 3 blocks to the participant due to receive them that month, we are now making them, photographing them, putting them up in the gallery and waiting until we’re out the other side of this to post them.  Better safe than sorry and the post is doing strange things at the moment so we don’t want to risk all that hard work getting lost.

It was my turn to receive blocks from the others this month but I’ll just have to wait to see them ‘in the flesh’.  However, we each also make three blocks in our chosen colours for ourselves so there was nothing stopping me from making mine in the peacock colours that I’d chosen.

You’ve seen this churn dash one before but my eye kept catching on the ‘too different’ ombré effect on the left which made it hard to focus on the design properly so I took it out and replaced it with a piece of the same fabric that toned in a little better.

Spot the peacock in the centre

Lastly, one I made up based on the spikes in a hedgehog block I sometimes make but without the hedgehog face. 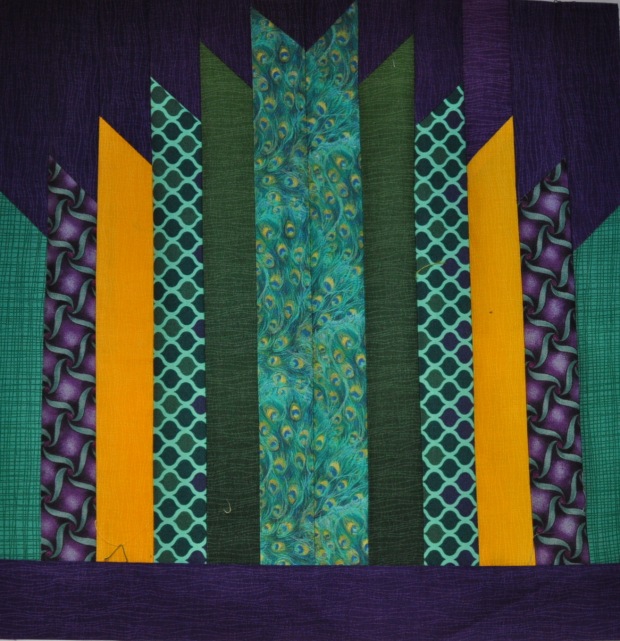 I haven’t seen the blocks the others have made for me yet – and I’ll only be able to see photos of them anyway until things are back to ‘normal’ – but I think these colours will make for a pretty dramatic quilt eventually.

Posted by tialys in Arts and Crafts, Patchwork and Quilting Projects - General, Uncategorized on March 13, 2020

Organised again by Kate over at Tall Tales From Chiconia, the latest Footsquare Freestyle (F2F) patchwork block exchange kicked off in February with ten participants from different countries and Tracy was the first drawn out of the hat to receive three blocks in her chosen colours from each of the other nine participants.

Tracy picked red, green and brown as her colours using photos of cranberries and a Christmas pudding to help us and, having checked with her that she is hoping to make a Christmas themed quilt, I foraged for those rare pieces of festive fabric that I have in deep stash.

I made this Churn Dash because I wanted to feature the lovely stag and deer image in the centre.

I love this foundation paper pieced banded star design and made quite a few for the participants in last year’s swap.  Tracy didn’t join us last year so I decided to make her one as there should always be stars at Christmas.

Despite having a lot on this year, I decided to go ahead and join in the swap again as I think I should be able to manage three blocks a month and I like to keep my ‘patchwork hand’ in.  I did say to Kate that I’d have to keep it simple this year but I couldn’t resist this pattern for little fir trees but, as it only makes a 6 inch square, I ended up having to make four of them to make a finished block of 12 inches which is, of course, why it’s called footsquare freestyle.   So, in effect, I made six blocks for Tracy rather than three. 🙄 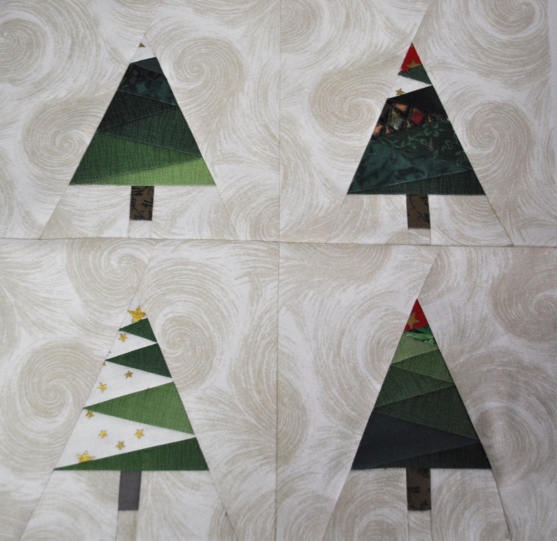 Also, I made lots of stupid mistakes while putting this one together, including the final join.

Still, I’ve moved on to Sue’s blocks now as she is the recipient in March and she has asked for shades of true blue and brown.  I’ve made two and will start on the third today so I can get them off to the States sharpish.

I am next to receive blocks after Sue, I am ‘Miss April’ this year and I’ve gone for a dramatic colour palette reminiscent of peacock feathers. 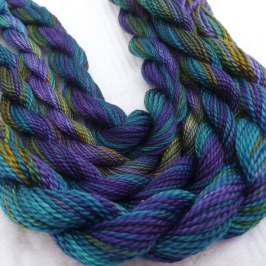 Rather more dramatic than my neutral(ish) palette of last year which resulted in my lovely superking size quilt. 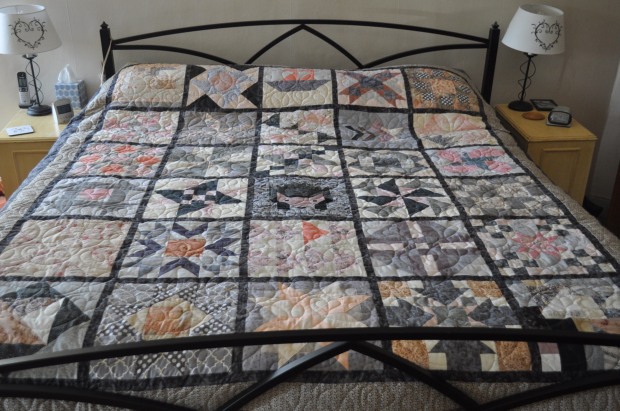 I’ve made one block for myself but will probably use April to get ahead with the blocks for the other participants in case I don’t have time later on in the year – I can always make my own ones up at the end. 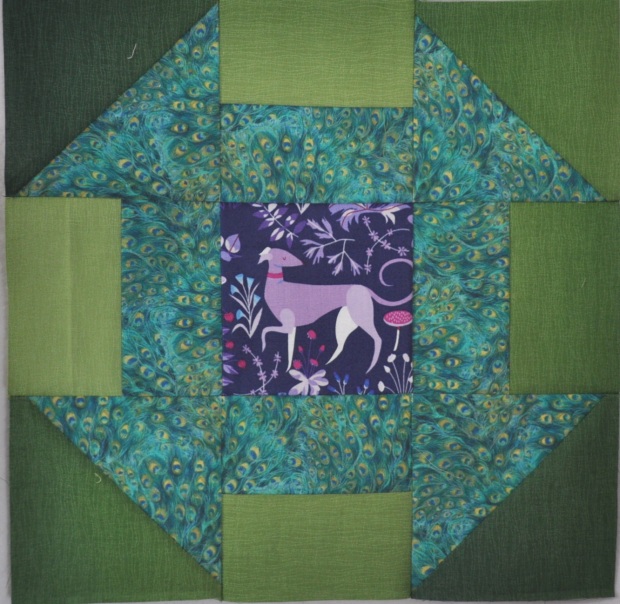 My use of an ombré effect green fabric has made the shape of the Churn Dash a little more difficult to focus on but, if you squint your eyes a bit and/or look at it from a distance, you can still make it out and it shows the sort of colour scheme I have in mind.