I am supremely uninterested in the Olympics – a sad confession but it’s true.  I’ve never really been one for watching televised sport and the more ‘professional’ it has become the more disinterested I am. I even managed to avoid the Tour de France again this year despite the fact that it goes right through our local town.  Bah humbug!  It’s not that I’m against physical activity.  Last week, for instance, in an attempt at sociability with some sporty friends who were visiting their holiday home nearby, I went for a 4.5 hour walk. Don’t let the word ‘walk’ fool you into thinking it was a gentle ramble.  For at least one hour, the route was so steep we could have done with crampons to hammer into the ground.  I blame Mr. Tialys (who else?) as he was in charge of poring over the map and sorting out the route and his instructions (from me) were ‘no more than 2.5 hours and not too steep’ .  It wasn’t helped by the fact that it was about 34 degrees and the humidity was very high but I suppose I can’t blame Mr. T. for that, although I did give it a very good try.  Anyway, on T.V. the next day, still trying to be sociable with the visiting sporty types,  we watched Jessica Ennis win the gold for G.B. in the Heptathlon and I did have a little tear in my eye and felt strangely jubilant and patriotic whilst pressing a bag of frozen peas against my calf muscles.

It is the season of the vide grenier here in France and I am making the most of it.  Saving up for a trip to Barcelona with her boyfriend, Madamoiselle Tialys the elder took a stall on Sunday to sell some of our tat and, making the most of having to be there at sparrow fart to help her set up, I was able to be in at the start  to buy some tat from other people.

I was rather taken with this doggie who, unlike most of the dogs in France that I find and bring home, won’t cost me anything in vet’s bills and food.  I’m not sure whether to leave him as is or to give him a lick of paint – maybe even some paint effect thingy like crackling or something. Maybe once I decide whether to put him in the garden or keep him in the house it might be easier to decide whether to keep him in his ‘chippy paint’ state or tart him up a bit.

Having established that, although I have three dogs, none of them look remotely like this one, the woman I bought him from declared him a ‘coup de coeur’ which is a nice way of saying I am a bit bonkers and good luck explaining yet another ‘too heavy to post’ item to Mr. T.  Speaking of which, I just had to have this too.  It is sooooo heavy and my décor isn’t the least bit ‘industrial’ or ‘loft’ but it just couldn’t be left there.  The visiting friends came round for dinner that night and we had some wine and very nearly had a game of  ‘who dares to plug the very old fan in and see if it still works?’  but , thankfully, good sense prevailed and I lived to share the photo with you.

Most of my time this week has been spent trying to complete the ‘two year quilt’ in time for Mlle T. the elder’s 19th birthday on Sunday as it should have been finished, you may remember, for her 18th birthday last year.  Anyway, I galvanised myself into action and set to work a couple of weeks ago only to realise that I needed more fabric for the border and, because I have taken so long to make it, the fabric has been discontinued.  After searching the internet high and low, I found somebody with some yardage left and it arrived from the U.S. today.  I can’t tell you what a pain this quilt has been to make.  Well, I can actually.  The problem was that, instead of doing what all normal people do and make the top of the quilt first and then back it with some plain or patterned fabric, I decided to make the back of the quilt a feature too, with a panel in the centre and then some patterned fabric and then some pieced blocks around the border.  To make matters worse, I made the back first.  Then, of course, when it came to making the top, which is pieced, I had to make it fit the back.  Bad idea.  Don’t ever do it.  Maths is not my strong subject and I have been having to make all sorts of calculations to make the top and bottom match up.  At the moment, it seems to be working.  Tomorrow I will attach the borders to the top and then it will be ready to be sandwiched together with the batting and the back.  Fingers crossed.    That leaves me Thursday and Friday to do some quilting (by hand) and Saturday to bind it.  There goes the housework again.  I don’t know whether I’ll manage it but I will let you know if I succeed.  Here’s a reminder of the back of the quilt which I had actually finished in time for her 18th.  You can’t see the blocks around the border very well but they are there.  What the hell have I been doing between then and now? 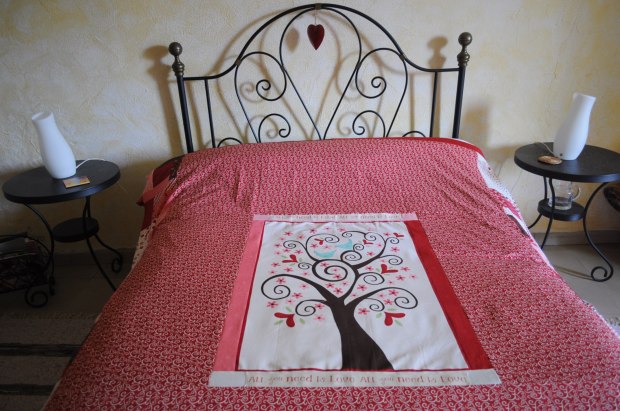 The scary thing is that it will be Madamoiselle Tialys the younger’s 18th in February and that’s only 6 months away.  Better start buying in the fabric.