Will I Crochet-Along or Won’t I?

Posted by tialys in Arts and Crafts, Crochet Projects on October 7, 2019

Remember I told you I had to finish a shawl (that I will probably never wear) before starting a new crochet project?

-then I gave it to my ‘me’ mannequin to model it for you as it was Sunday morning and I hadn’t yet bothered to get dressed and, while wearing a shawl over a floaty summer dress, jacket or coat might work, wearing one over a nightie would just make you look like an old lady so I didn’t even go there. 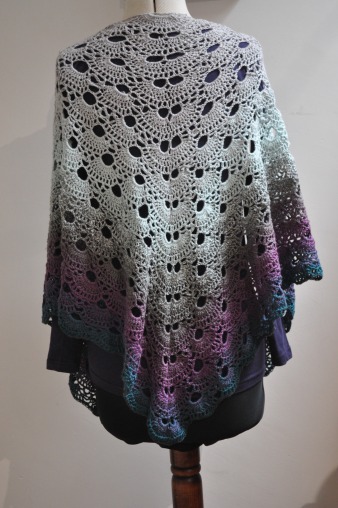 She may be ‘accessorised’ in this way for some time to come although I might wear it as a scarf.

I did try to put tassels on the three points for scarf wearing purposes but my hand made ones didn’t look right so they came off again. 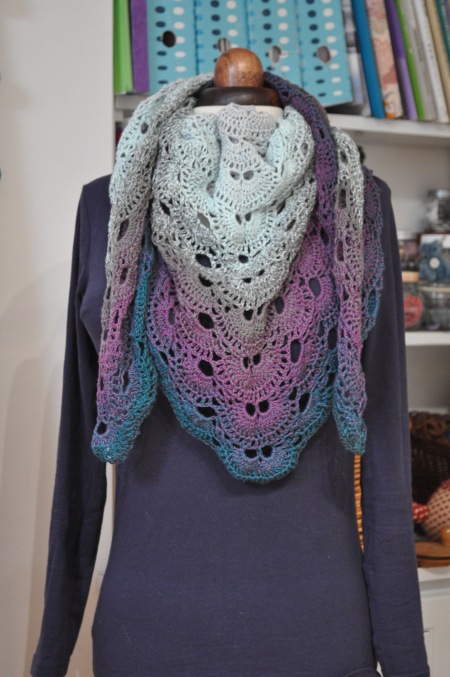 Still, crochet shawl made, at least that’s another ‘project in my head’ that has come to fruition and a ball of relatively expensive yarn used instead of stored away and contributing to stash overload.

So, I was now free to start the Nature’s Walk crochet along designed by Cherry Heart and organised by Black Sheep Wools.

Eight squares a week doesn’t sound like much really but, when you have as many other non-crochet projects on the go as I do, I found myself struggling a bit. 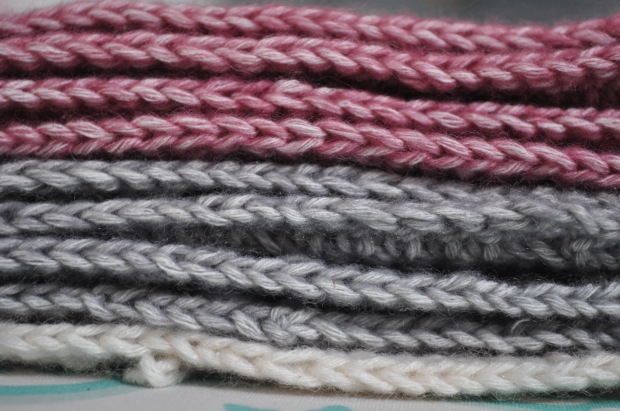 I made the test swatch whilst waiting for the yarn to arrive as I had used Scheepjes Stone Washed yarn before so had a bit left.  I am obviously a loose crocheter because I have had to drop at least one recommended hook size depending on the square in order to obtain the correct size.  The test square had little hearts on it so I’m hoping to use that design later on in the blanket or in another project.

As this is called ‘Natures Walk’ and, with the colour of the yarn pack I bought being called ‘Wild Hedgerow’, the ‘nature’  theme for the squares is revealed as the patterns are released,

This one is called ‘Gates’ for which I had to drop down to a 2.5mm hook.

This one is ‘Butterflies’ which I managed with a 3mm.

If you bought your yarn pack from Black Sheep Wools they issue you with a bonus square each week so you do four of the ‘ordinary’ one and four of the bonus one.  There has been much wailing and gnashing of teeth from those who aren’t getting the bonus squares but I guess it’s a marketing ploy by BSW which is obviously working.  Although, the bonus squares will be released in January on Ravelry for free so patience will be rewarded.

The current week’s squares are called ‘Wheat’ and ‘Berries’ and, if I manage to get them all finished, I’ll show you those next time.  I bet you can hardly wait.

So, will I won’t I?  It doesn’t really matter does it?  Some people only crochet and don’t do dressmaking or quilting or other crafting so they can whizz along.  Some people are at work all day or are wrangling small children so simply haven’t got as much time as others might have.  Some people do housework.  Whether I manage to stick with the schedule or not – I’m enjoying learning new patterns and there are plenty of people still waiting for their yarn to arrive and haven’t even started yet so I won’t be alone if I lag behind.  Nobody’s waiting on me to finish and there are no prizes.  I refuse to feel pressured when there’s no need.

How do you feel about CALs, QALs, WhateverALs?  Do you like them? Do you feel incentivized or under pressure.  I must admit this is giving me a bit of a push to get on with it and not let it become a longtime WIP but I’m not going to let it stress me out.

Posted by tialys in Arts and Crafts, Crochet Projects on September 22, 2019

Some time ago I bought a Scheepjes Whirl in the wonderfully named colourway ‘Blackcurrant Squeeze Me’ with the intention of making a Grinda shawl, shown below. 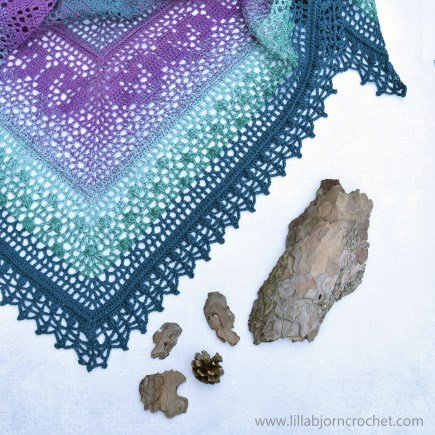 It’s beautiful and the pattern is well written with lots of help online but I just wasn’t feeling it. 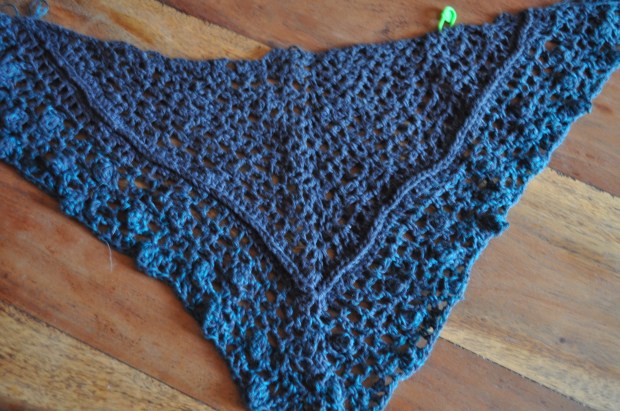 I love the yarn but it’s fairly difficult to frog (undo) so, by the time I’d done that on numerous occasions, I flung it aside in a huff. 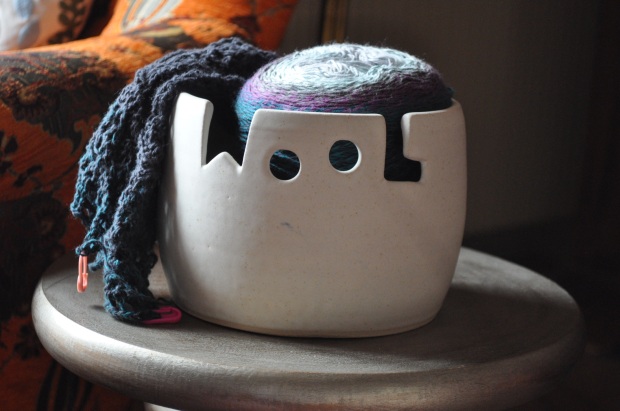 It has sat sulking and occupying my lovely wool bowl ever since until, one day, I thought I’d make something else with it instead because it’s far to good to waste so I had a forage around and chose the Virus shawl a free pattern on Ravelry.

I don’t wear shawls but this yarn has a lovely drape and I will be able to wear it as a scarf with lots of folds and I might even add some tassels at the end.

This time I started from the inside of the ball and so the light colours you see will be at the top, nearest my neck which is also developing a few folds.  The abandoned Grinda is still attached to the other end of the yarn cake – just in case.  In case of what I don’t know.

So far I’m happy with this although, at first, I thought that colour change from grey to pale blue was never going to happen.

I am pressing on with some urgency now although it’s got so big it’s taking me a couple of hours to do a row or two in the evenings.

Why do I need to get it done? Well, as with my recent post about finishing one quilt so I can start another, the same applies to crochet projects – at least it does when I’m feeling disciplined which, to be honest, doesn’t happen that often but I’m going through a phase. 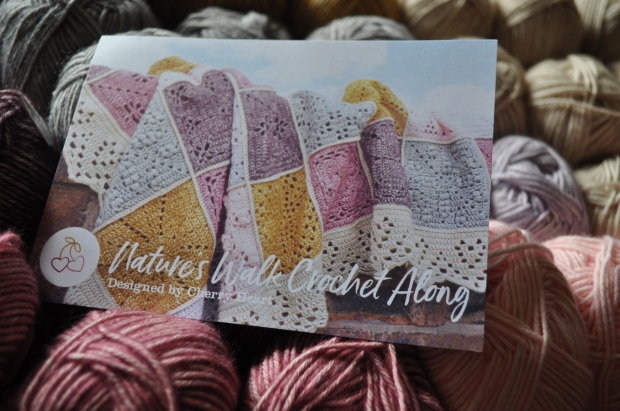 Black Sheep Wools announced a Crochet A Long which starts next week and I was seduced by the fact that one of the colourways (the most expensive of course) was in Scheepjes Stone Washed yarn which I’ve used before and it is lovely and soft and the colours are muted and gorgeous.   Also, the pattern itself is so pretty, designed by Sandra at Cherry Heart and, lastly, it’s made up of squares in different patterns which will be released one by one so that you will end up with a sort of sampler blanket.  I haven’t done a lot of square crochet – weird I know as that’s usually what people start with – but there’s the challenge.

I was panicking a bit as I’d put in my order on the 5th September, was told it had shipped on the 9th and still hadn’t received it by the 19th.  When I looked on Facebook *shudder* I realised lots of people hadn’t received their packs either which, call me selfish, was encouraging.  Apparently Black Sheep Wools, bless them, have been overwhelmed by the demand, so much so that it seems there is now a shortage of the original colours in the packs (there are two Stylecraft colourway packs as well as the Scheepjes one)so they have had to do some substitutions.  This has had a few people up in arms so quite a lot of fun was to be had (by me anyway) reading some fairly nasty comments which reminded me why I don’t like Facebook and usually resort to it out of necessity only.

Anyway, my lovely postwoman arrived today clutching a big black bag and I was down two flights of stairs and flinging the front door open before she could even ring the bell.  Welcome to my exciting life. 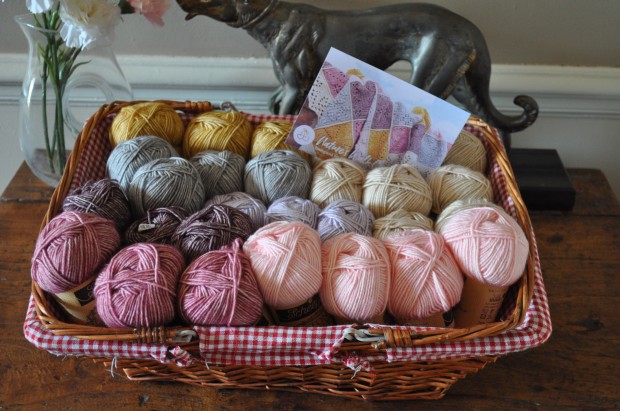 I’m pleased my order was obviously packed before the colour substitutions because the soft pink and the lilac you see above were replaced by darker, and in the case of the pink, brighter shades which I wasn’t quite so keen on although I’m sure they will result in an equally lovely blanket.

So, must get off now, I’ve got a shawl to finish and, maybe one day, I might even wear it.