Posted by tialys in Arts and Crafts, Dressmaking Projects on June 12, 2019

Another post in which I share my efforts to use up some of my ‘fabric stash beyond life expectancy’.

A couple of years I bought two lengths of scuba fabric to make tunic tops for my daughter. One was a floral which I used but, for a reason I can’t remember, the top wasn’t successful so it’s in the scrap bin for possible use in a future project.

The other was this one featuring various tattoo designs.

I don’t think even one of you liked it and I didn’t either – it was the daughter’s choice – so it has languished in the fabric stash ever since, only narrowly avoiding being given to the charity shop/thrift store/op shop (insert whatever these places are called in your part of the world).

Recently a free pattern for a tank top using stretch fabric was brought to my attention and I thought, as the bare minimum of fabric in proportion to flesh and other clothing would be on show, this might actually work for the garish stuff.

This is the Super Basic Tank Top pattern by Halfmoon Atelier which you can find  here and,  if you sign up for their newsletter, the pattern is free.

There are two methods on how to do an FBA (full bust adjustment) included in the instructions and I followed the easier method and graded between a size 6 at the bust and size 5 for the waist and hips.  However, that made the armholes too big on me so I just used the size 5 for all measurements on the actual garment.  Of course, being a pattern for knit fabrics, this could vary.  The next time I make it, if the fabric is more or less stretchy than the one I used this time, I could need to go down or up a size.  These are the little things that make life so exciting.

I love the back which is also scooped deeply but not deep enough to show your bra.

In fact, it’s difficult to tell which is front and which is back so I put a label in in case I get confused.

Scuba fabric is a little weird as it has a slightly spongy feel and it is definitely not a fabric to keep you cool in hot weather but, on the plus side, it doesn’t fray, it takes colours and prints beautifully, has a good amount of stretch and, I find at least, it’s easy to sew with.

So, out of the stash bin and onto my body.

Less is definitely more with this fabric so I think it works really well as a vest rather than, as originally envisioned, a tunic with 3/4 length sleeves. 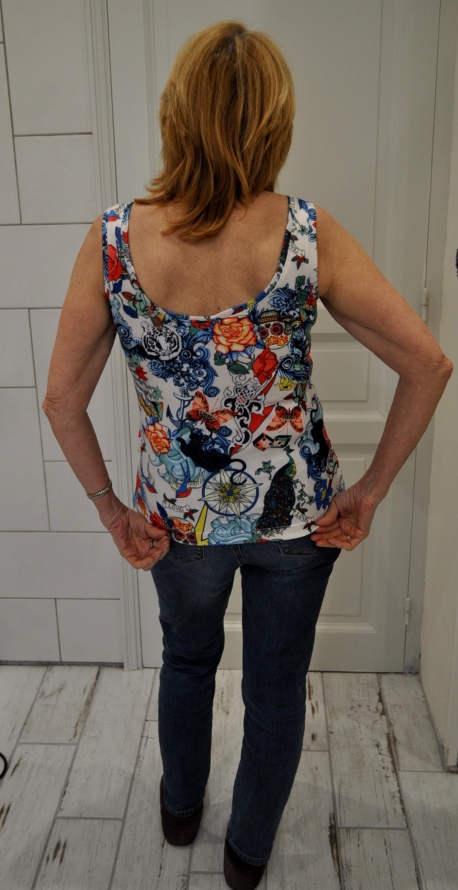 This is the nearest I’m ever going to get to having a tattoo.  My sister has a daisy chain tattooed round her ankle and said it was worse than childbirth which is my benchmark for pain and, if it had been me, I’d have stopped at just one daisy – although, funnily enough,  I didn’t stop at just one child.

So, do you like the fabric a little better now?

Tiptoe Through The Tunics

Posted by tialys in Arts and Crafts, Dressmaking Projects on October 19, 2017

Remember I made a tunic for Madamoiselle Tialys the Younger recently? (If not it’s here). Well, I fancied making one for myself and it just so happened I had the perfect fabric already in my stash which doesn’t happen very often.

Not last time, but the time before that when Ali over at Thimberlina organised the Yorkshire Spoolettes meet up, she ran a competition for people who couldn’t attend to guess the total mileage undertaken by all the people who did.  By some amazing stroke of luck I hit upon the nearest mileage (in the international entry category) and Ali sent me some goodies.  I had said I wanted to make an Agnes top but she was very generous and sent me more than enough of this black and white stretch fabric so I thought I’d save it for something a bit more substantial than a t-shirt.

So I did and here’s what I made with it.

I made the same view tunic as before but with the straight hem instead of the pointy one.

In other tunic news, I’m currently having a rocky relationship with scuba fabric.  I thought I’d give it a whirl for a different style of tunic I wanted to make for Mlle T. and she chose the fabric (so don’t blame me!).

I bought this pattern which seemed simple enough but the Mademoiselle had other ideas.

She wanted bell sleeves so following Ali over at Thimberlina’s example ,although using a slightly different method,  I adapted it as requested.

I had a bit of a struggle with the neckline, back and front,  as it came out too gapey which might be due to the scuba fabric although the pattern does list ‘novelty knits’ as one of the suggested fabrics.  I’ve improved the neck problem a little by taking off the facing which I wasn’t keen on using anyway, reducing the back seam allowance and cutting the facing slightly smaller than it was before so I could stretch it round the neckline a little more which brought it in a bit though it’s still not perfect.  The sleeves and the bottom require hemming and I’m not sure how to tackle that yet – I’ll do some research.  I know I could leave it as it won’t fray and the hem of the tunic would probably be O.K. but the sleeves don’t look right unhemmed in my opinion as you can see the plain white reverse of the fabric which just looks odd.  (The trailing thread will be cut off though – I didn’t leave that as a design feature).

My conclusions about scuba fabric are that I don’t much like it.  I don’t like the slightly spongy feel and the vaguely ‘cheap’ look and feel of it – although there might be different qualities I suppose.  The designs are a bit ‘urgent’ too if you ask me.  I don’t like the floral one Mademoiselle chose – I think it looks frumpy but there you go.

I know what I’d like to do with it but I think the only way to get away with actually wearing it would be as a very fitted t-shirt with 3/4 length sleeves perhaps.  Any ideas or would you accidentally on purpose lose it at the bottom of your  fabric stash?  How do you feel about scuba fabric if  indeed you have ever encountered it?  Is it just me?

Posted by tialys in Arts and Crafts, Dressmaking Projects, Life in General on May 28, 2015

I nipped over to the U.K. last weekend to accompany Mlle. Tialys the younger through the labyrinthine ways of Toulouse and Gatwick airports so that she could attend the Comic-Con event at London’s ExCel Centre with her sister.

Although I’m not really into it all myself, never having been a fan of comic books, video games, Nintendo DSs or any of that stuff, I did enjoy seeing some of the costumes.  I didn’t actually go in to the event myself but I saw Jokers, Star Wars characters, variously masked men and women, Supermen and scantily clad young ladies on the underground stations as I beat a hasty retreat to the other side of London which, frankly, sufficed.

Now that it’s over there is a bit of a ‘lull’ in my life at the moment, so much of the last few months having been spent in preparation.  Mostly because of the Princess Zelda costume Mlle. T. the elder was making.  She also made the one for her friend.  We had to buy 18 metres of white polyester satin for those skirts and capes and that was our main purchase from our trip to the Goldhawk Road when I went over in April.  Her friend made the shoulder pads, tiaras and other gold accessories. (I must ask her for that staff if she’s finished with it, it would make such a cool broom.)

Not that I was directly involved until the day before when we were frantically sewing on ribbon around the scarily wide hems and hemming and gathering the capes but I was party to all the dressmaking dramas leading up to it.

I escaped to my Mum’s house before the rest of the Princess Zelda cast arrived, knowing that an evening spent surrounded by students, pizza boxes, spray on hair dye, body paint and beer would be a trauma too far.

Poor Mr. T’s flat was looking a bit worse for wear the last time I saw it as there was spray hair colour all over the towels, blue body paint (courtesy of the fairy holding the ‘hey listen’ sign), glitter, emptied tubes of superglue and discarded pieces of fabric.  Another reason I beat a hasty retreat.

As a point of dressmaking interest, the tabards on the Princess Zelda costumes were made using scuba fabric.  I suggested it because the edges wouldn’t need finishing (anything to save time!) and it would cling quite nicely to the body.

For those of you not au fait with the Legend of Zelda it is a high-fantasy, action-adventure video game series created by two Japanese game designers and that is definitely true because I Googled it.  I had to do that despite forking out for numerous variations of the Zelda games for Christmasses and birthdays over the years.

It wasn’t just comic book and gaming characters though.  There were costumes from fantasy t.v. series, books and films too.  The scariest ones I saw were these two Weeping Angels from Dr. Who.

Some people may think it strange that grown men and women want to dress up as fantasy characters and, I must admit, there are some that do seem a little ‘obsessed’ but, as a fun way to escape the realities of ‘real’ life for a couple of days and trash your Dad’s flat in the process, it can’t be topped.

Now I just need to erase the unnerving sight of my brunette, brown-eyed daughter as a blue-eyed blonde with elf ears from my freaked out memory and I’ll be fine.

The next one’s in October – I expect costume ideas may have already started formulating.