Posted by tialys in Arts and Crafts, Dressmaking Projects on January 11, 2019

With apologies to James Bond for nicking the title of one of his films, regular readers will know there are certain things I have vowed never to do.  In the sewing arena this included never bothering to make a pair of jeans.  I don’t have any problems getting ready to wear jeans to fit me properly so I couldn’t see the point and, anyway, what a faff!

In the end though, I couldn’t resist the challenge – I wanted to prove to myself I could do it so I bought some grey marl denim and some ‘only just’ contrast thread – not brave enough yet to do so much very visible top stitching – bought Closet Case’s Ginger Jeans pattern, measured the pieces against an existing pair of jeans that fit me well and off I went.

Curved front pockets – no problem (I’ve even lined them in a blue ditsy Liberty fabric just for fun).

Back pockets – just a question of where to put them to enhance my ‘only just there’ bum.  This isn’t ideal placing but I had started to realise by now that these jeans were never going to be worn and I just wanted to get them attached and move on to the next bit. 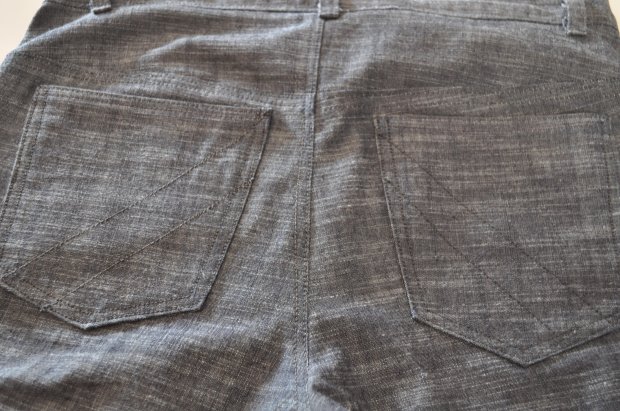 I thought I might as well carry on until the bitter end and call them a muslin/toile/practice run – anything other than a complete waste of time.

So, I added the waistband, complete with fancy facing, put on the belt loops and a proper jeans button. 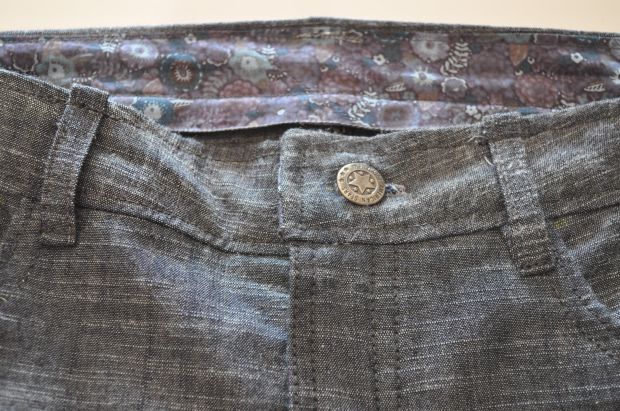 All in all I have convinced myself I’m perfectly capable of making a pair of jeans with all the necessary bells and whistles.

If only they fitted me.

Totally my fault – the ‘denim’ fabric I chose has got hardly any stretch in it at all.  So, even though, when I hold them up to my favourite pair of shop bought jeans, they are exactly the same size, the lack of stretch means I can hardly bend my knees…..

….and sitting down for any length of time, if I could even manage it, might crush my internal organs.

I realised about mid-way, they were going to be too tight but it was good practice.  So, if you’re about to make jeans – they’re really not too difficult but just make sure you have the right fabric and practice your top stitching.

I think I’ll give them another go once I’ve got over the trauma and, when I do, I will be extremely picky about the denim I use.  Apparently, too much stretch is not good either so it’s a bit tricky and I’d suggest finding somebody who has made a successful pair (i.e. not me) and copy their choice of denim if possible.  If you’re in the U.S., this will not be a problem at all – in rural France it’s more difficult.

Just to be a bit more upbeat, the top I’m wearing with them is another Sewaholic Renfrew top – is there anybody out there who hasn’t got this pattern and swears by it?  I made this one using the cotton jersey I bought which had ‘Kid’s Collection’ or something similar printed down the selvedge.  Ask me if I care.

So that’s the jeans off my ‘never say never’ sewing list.

Next up is the coat.

My sewing friend Sandra and I are making this together (the unbelted version)  – or rather, we’re making one each but at the same time.  The cutting out of the interfacing was the worst bit so far.  I have a feeling those welt pockets are going to be nightmarish too and that is the point I’ve reached as of yesterday when we had our weekly sewing session.  Yes ‘weekly’ – and we spend the first hour yakking – so it might be some time before the finished article emerges.

So, that’s two sewing ‘never say nevers’ ticked off but, even though I did give in and buy a sparkly top over the festive season, I am still adamant that I am never, ever going on a sea cruise .

Have you ever said ‘never, ever’ to something – either in crafting or life in general – and then changed your mind?

Another Flounce of Frocks

Posted by tialys in Arts and Crafts, Dressmaking Projects on August 20, 2018

You may remember, in a previous post,  I was wondering if there was a collective noun for dresses/frocks and, in the absence of any definitive answer, came up with ‘a flounce’.  This time the ‘flounce’ is bigger.

As the weather’s been so hot I couldn’t countenance wearing my usual style of dresses and tops which tend to be quite fitted.  I just wanted something I could pull on and float around in when I need something more than shorts and a t-shirt – nothing too dressy, just comfortable and cool in the heat.  I searched through my patterns and the only one that fit the bill was this one which – probably due to the fact there is a very young girl modelling it and it’s very short – I bought to make for the Mademoiselles some time ago but never got round to it.

I made the first one in some cotton chemise in grey which looks really boring until you get up close and there are some sprigs of embroidery on it.   It creases a lot like linen but it’s supposed to be a ‘washed/distressed’ look so I guess it fits the bill.

It’s meant to have a back zip but what a pain they are to do up if you’re on your own in the house when you want to wear it – am I right?  So, I thought I’d try making it without a zip at all and see if I could pull it on over my head.  I know I can insert invisible zips quite efficiently so I wasn’t being lazy or a scaredy cat here, honest!  The dresses are lined so there are no facings or bias trims but you have to do that cool trick of partly constructing the dress and then pulling the backs through the shoulder seams to turn it all right side out.  One reason, I suppose, why I wouldn’t be able to cut the back on the fold instead of in two pieces if I want to use this lining method. 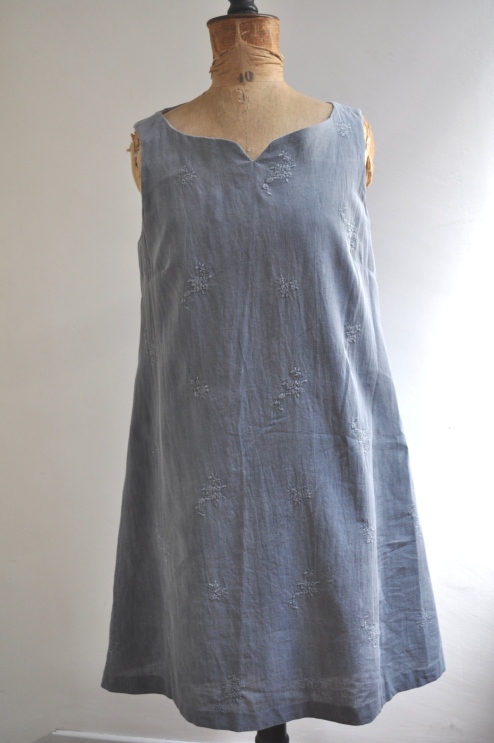 The dress was slightly too big for me on the neck and above the bust so, next time I made a size down but graded the back seam out a little around the area of the bust darts.

For the second version (my favourite so far) I used a rayon I’d bought in the Goldhawk Road a couple of years ago when I was there with Mlle Tialys the Elder where we went just a little bit crazy.

So, this one is almost perfect and I’ve worn it quite a lot so I thought I’d make another in a ‘distressed’ linen which I like but there are some flaws in the linen – a faded stripe here and there – one of which I managed to place just above my bust and the other just above my bum.  It’s almost as if I planned it like that.  Then, when I was using a tracing wheel to mark the darts on the fabric, I blindly reached for my small rotary cutter instead and ran it over one of the ‘legs’ of the dart.  The blade is getting a little blunt and the linen is quite tough so I thought I’d got away with it but, after construction, I noticed some of the threads pulling out so I did a bit of a repair, fortunately hidden on the inside by the lining, which may or may not hold.  Typical!

Creases and flaws but that’s linen for you.

I’m hoping the white lines will blend in a bit more with washing but it’ll be fine to wear to go to the supermarket etc. so I’m not too bothered.

The last one – because I was definitely on a roll this time and had all the alterations marked on the pattern – I decided to make with a round neck instead of a split neck.  However, the neckline is far too high for my liking so I scooped it out a bit more – another pattern piece change that I’ve remembered to mark in case I ever decide to made a 5th one!

Some of you might remember the rather odd fabric I bought in a charity/op/thrift shop for 4 euros a while back.  Something about it appealed to me but I had no idea what I’d make with it. 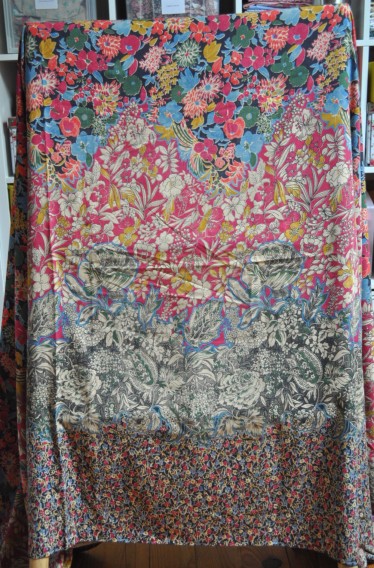 A maxi skirt would be good but the style might be a bit ‘hippyish’ for me.  Anyway, I thought it could work with this dress…… 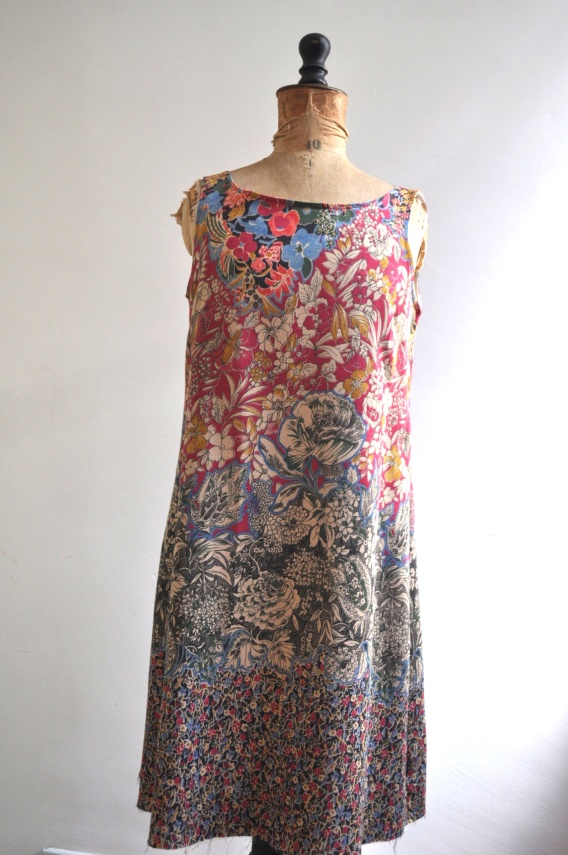 …and so it did (just needs hemming).

So, I should be able to see the rest of the Summer out with these handy little dresses that I can just pull on over my head and be done.

This pattern can now join my list of other ‘go to’ patterns which I know will turn out well without too much fuss.  Sewaholic’s Renfrew top is there at the top of my list too.

And, just to prove I do actually wear them and don’t just use them to dress up my mannequins –

Do you have a favourite pattern you keep going back to?

So That’s What That Gizmo is For

Just before I start concentrating on what I can fit in a cabin bag in order to avoid Easyjet’s hold baggage charge when I go to the U.K. next week, whilst still having enough frocks, shoes and knickers to last seven days, I thought I’d show you my second and much more successful attempt at Sewaholic’s Renfrew top. 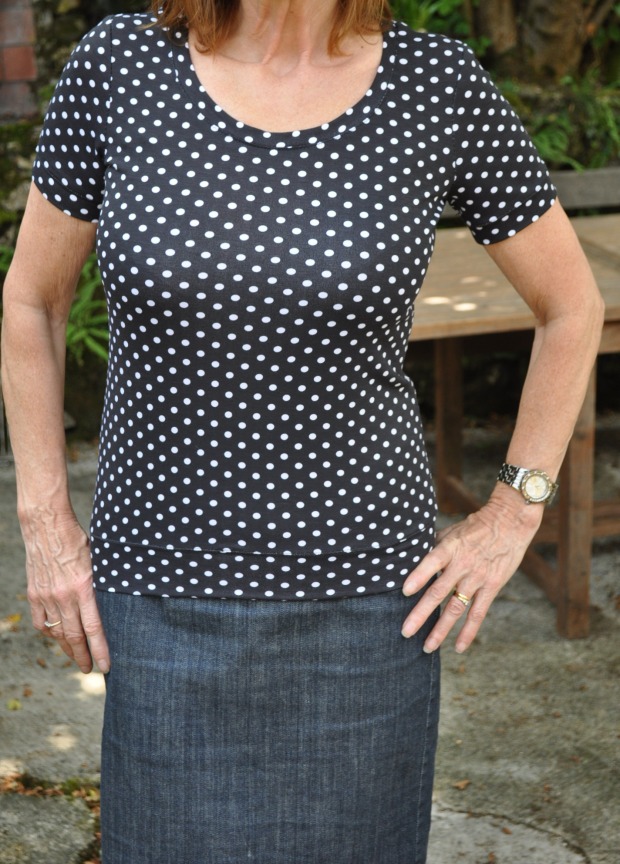 This time, I made it in two sizes smaller at the top and three sizes smaller from the waist down.  I hadn’t realised, until after I made the first one, that Sewaholic specialises in pear shaped women which I definitely am not.  Well, actually, I am a bit but I would be an upside down pear which I don’t think is what they mean.  Also, I cut the neckband and waistband a little smaller so that I could stretch them a bit more when sewing them on to give a better fit.  The knit fabric I used was a bit thicker so the whole thing is more ‘T-shirty’ (made up word!) and in order to do a double top stitch around the bands, I delved into the depths of the accessories drawer in my sewing machine and finally realised what the extra felt ring, the spool holder and double needle were for!

By the way, I don’t know why I appear to have the hands of  H. Rider Haggard’s ‘She’ after she stepped into the flames of everlasting youth one too many times but I am blaming the heat and a camera malfunction.

Off to my mini sewing bee this afternoon where I am hoping to make this cute little tote bag and, time permitting, the coin purse too.  I don’t have these same fabrics but I will do a slightly less colour diverse approximation. 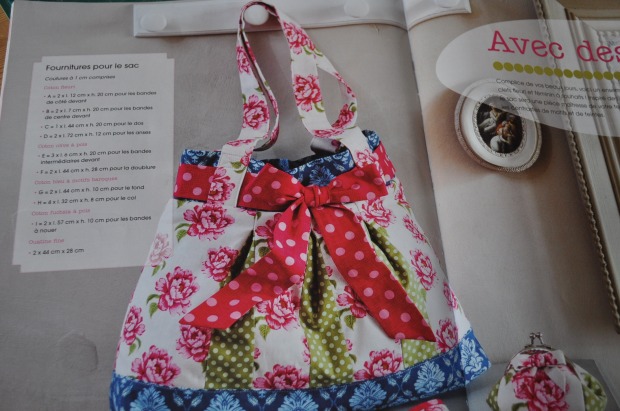 As you might be able to tell from the text, in the photo, this is another minimalist French pattern but I am always up for a challenge.

On a parting note, having both dogs and cats in quantity at our house, I would say that I am a dog person first and foremost and, if I had to choose only one animal to have, it would definitely be a dog.  However, now that I’ve seen O2’s ‘Be More Dog’ ad, I think my cats may have potential.  Have you seen the ad?  Lord knows what it has to do with the product but if you like cats and dogs you’ll love it – it’s here http://www.youtube.com/watch?v=iMzgl0nFj3s.