I’ve had a bit of cabin fever recently.  First, there was some snow.  To be honest, not a great deal but we live up a hill which is not pleasant to drive down (or up!) once it is icy so I prefer to stay put unless absolutely necessary.  Second, I had a dental implant and was not fit to be seen by the outside world.  The inside world wasn’t too keen either but they live with me and had to put up with it.  Don’t get me wrong, the procedure to have the implant done was no problem – just in case you’re thinking of having it done and don’t want me to scare you – it’s just that my face was swollen up a bit for a few days, I had an impressive bruise, some stitches which showed between my teeth and almost drove me crazy and a gap while I waited for the temporary crown to be made.  No pain though. Plus the swelling plumped my face out somewhat and several wrinkles disappeared although, alas, that was only temporary.

So, using the time spent indoors profitably, I opened a new Etsy shop for my dog collars as they were starting to overtake my current shop and making it look a bit too ‘doggy’.  Of course, this will not be a profitable shop because I am doing it mainly to help out the Dog Rescue but I can’t tell you what fun I’m having picking out the designs and trying to persuade my sewing machine that it really doesn’t mind stitching through multi layers of webbing and grosgrain.

I know there are lots of people making dog collars out there but I can’t take any more dogs on – I already have three plus four cats – and I’m a bit far from the Rescue Centre to help with walking the dogs on a regular basis so I wanted to do something else to help. 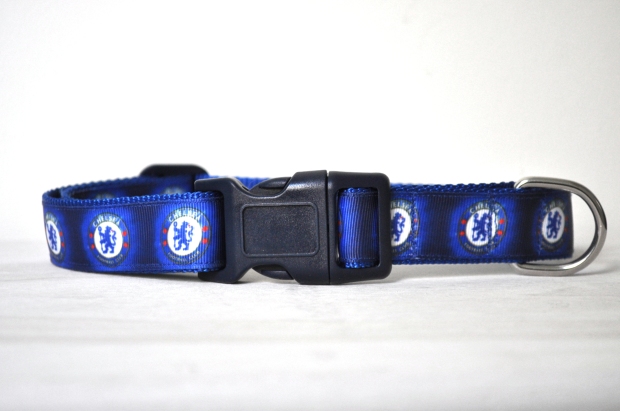 A special request for some Chelsea Football club supporters I know! (I’ve made some West Ham ones too but I’m not allowed to mention that!)

So I’ve set up ‘Ouaf Ouaf’ (or Ouaf for short) which is what French dogs say instead of ‘Woof’ and will gradually put them on there, along with the bandanas I was making before, as and when I can make them, as well as touting them around friends with dogs (and some without!) and local fund raising events.

I’m having fun taking the photos too as you can see although this dog looks rather more like a hippo which I’m sure don’t cock their legs up to wee but you get the idea.

My favourite cartoon dog of all time.  I was chuffed when I found Muttley from Wacky Races on a ribbon.

These collars have caused a bit of a commotion in the house as, every time I finish one and brandish it, chrome D ring clinking, as I like to do, the resident dogs think it’s a sign they are about to be taken out on another walk.  I’ve found it easier, in most cases, to take photographs of the collars off the dogs’ necks rather than on but a few modelling assignments have been handed out. 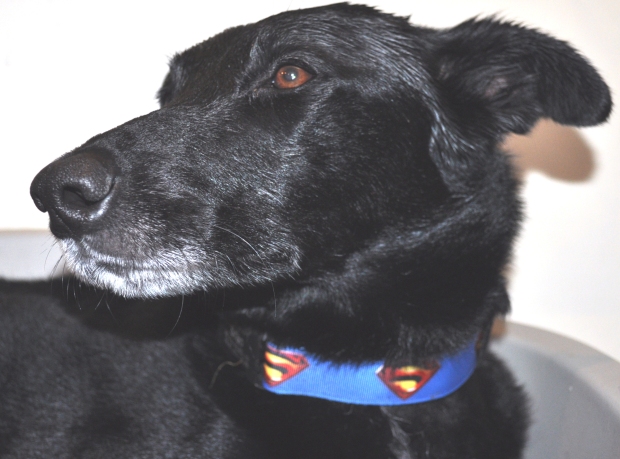 Sometimes, there is just curiosity and my photo shoots attract unwanted attention. 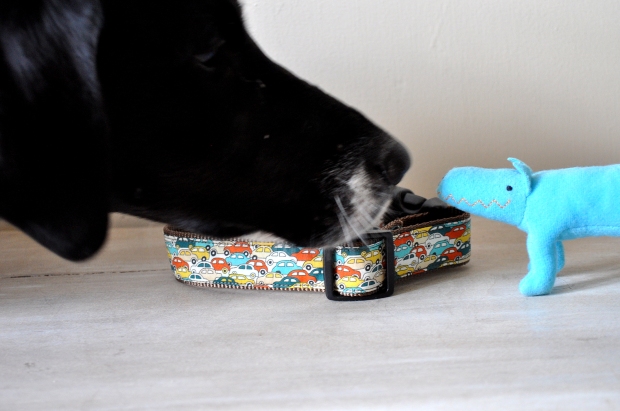 I tried making a sort of double fold bias tape from some Liberty fabric I had in my stash for this one which worked well and might end up being more cost effective than ribbon (especially if I don’t use Liberty tana lawn!!).

No blog post about dog rescue or dog collars is complete without a basket full of puppies of course.  Just look at those little faces.  Of course, being puppies these little girlies will probably soon find homes but the underlying problem is too many people – and it is a big problem in France – just can’t or won’t sterilize their dogs.  Then they let them out to wander around unsupervised and this is the result.  You can read their story here but, basically, the mother was rehomed by the Société Protéctrice des Animaux before they introduced a policy to sterilize all female dogs before rehoming and the new owner didn’t bother and this is the second litter of puppies that have had to be rescued from her as a result – the first litter and another three from this one she gave (or sold) to who knows who?

Anyway, I am off to do some vacuuming before Mr. T. gets home from the U.K. and thinks I’ve been doing nothing all week except mess with ribbon and webbing, set up amateur photo shoots and read up about what is good for bruising – arnica cream??  Then I’m going to make a bag – just for a change.

*must keep busy and not look a puppy faces *  house is full * puppies are a lot of work*  the cats won’t like it * too many dogs already* mustn’t show Mr. T  the photo as he is worse than me*no, no, I mustn’t*