I rather like the idea of my Tight Lipped Tuesday series so will take the opportunity of boring the pants off you with my recent trip across the border into Spain (aka Catalonia) with lots of photos and few words (relatively speaking!). Feel free to go and do something more interesting but my blog seems to have become my photo album lately and means I have an online record to refer to – so, a bit selfish really.

Mr. Tialys and I took a break of four days and drove down to the Costa Brava.

Only about 3 hours drive away. 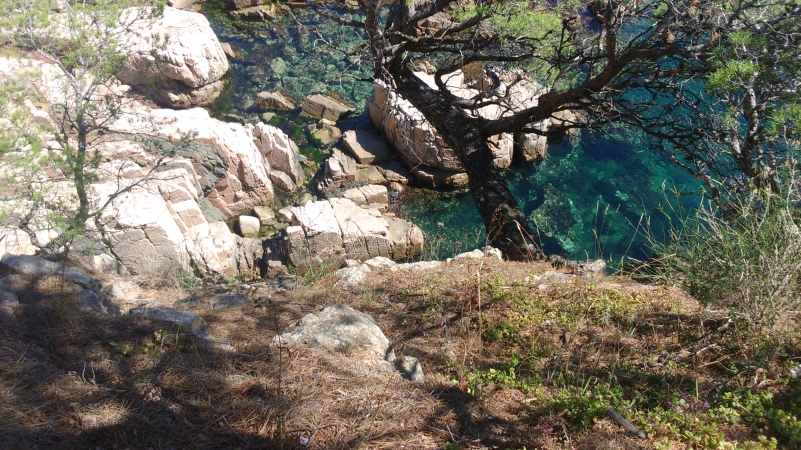 We walked the coastal path to work off all the mussels and Sangria. The water was crystal clear.

So different from the usual perception of this coastline.

Did I mention the Sangria?  The waiter raised an eyebrow when we ordered a litre jug between us but we were not deterred. 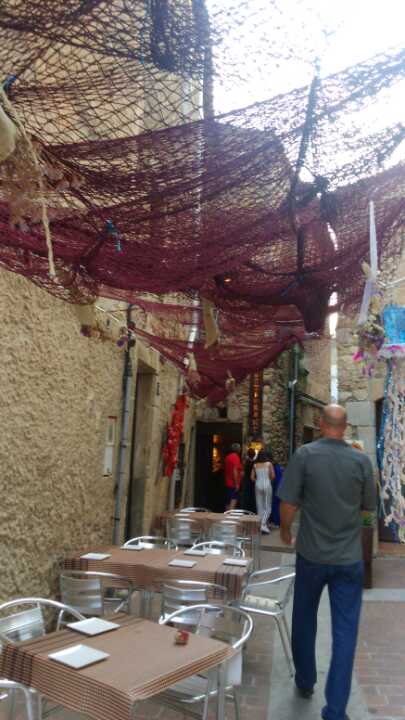 With a crafty touch. 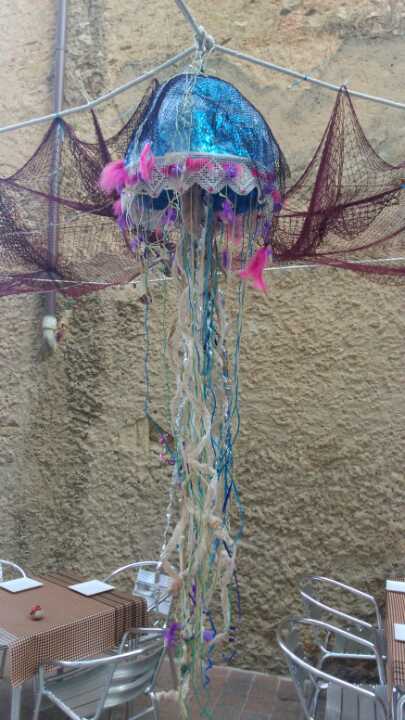 and an atmospheric interior.

The town of Begur is awash with bougainvillea.

As well as Moorish and Spanish architecture there are neoclassical examples dating from the late 19th century when merchants from here went over to Cuba to make their fortunes and returned to build houses.  Lots of vaulted, decorated ceilings and beautiful tiled floors.

I love peeping in at courtyards.

We spotted this lovely view from the road and booked to have cocktails and tapas there in the evening to watch the sun go down.

On the way back home up the coast we stopped at Empuries which, according to Tripadvisor,  is one of the finest historic settings in Catalonia.Two cities, one Greek and one Roman, set by the sea at L’Escala on the south of the Bay of Roses, named by Unesco as one of the most beautiful in the world. 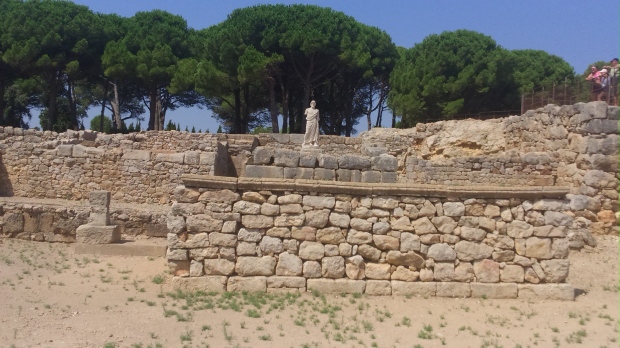 The archaeological digs are still going on as I think they’ve only uncovered about 20% of what’s there.

Some of the mosaics they’ve found in the Roman city are almost intact which is amazing when you consider how long they’ve been there.

My quilters eye was drawn to them instantly.

We only stayed away four days as Mlle. Tialys the elder had come over for two weeks to house-sit with her sister for a bit and, as we don’t see enough of her these days, we wanted to spend some time with her too.

Back in France, we took her to our favourite restaurant to say ‘thank you’. 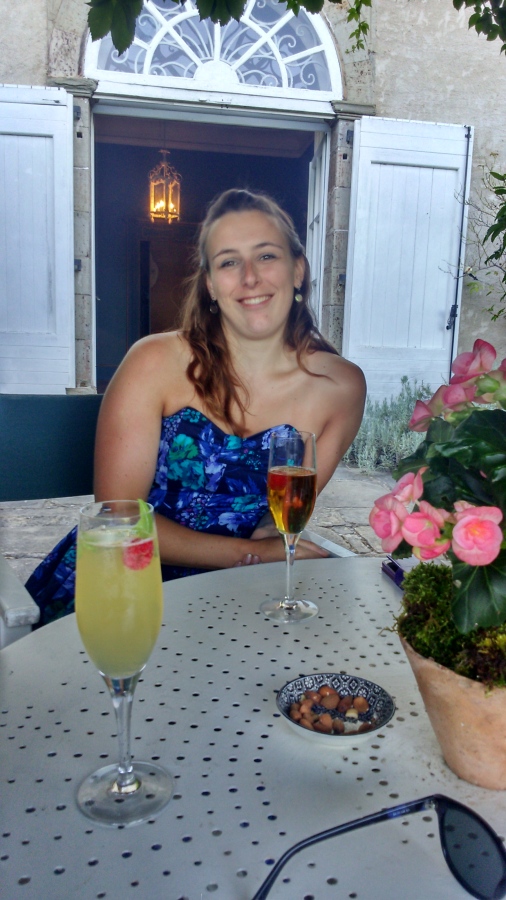 Then the girls and I went across another border to Andorra  which is most famous for the skiing but, in Summer is very good for hiking, cycling, etc.   Also, as we do every year now, we went to the free show that Cirque du Soleil put on here throughout July.  This year was probably my favourite as the music was so good – usually, it’s a bit more like wailing for atmosphere if you get my drift – and the ‘surely not human’ bendy people put on their usual amazing spectacle.

Plus, it is tax free so it seemed a shame to go home without a bottle of gin or two.

Here’s a brief look at the Cirque du Soleil show – as usual with these shows I have very little idea what the story was about and the sound quality’s not great on this clip but you get the idea.  I want those long stripey socks!

Not that tight lipped after all. Sorry.

In A Big Nutshell

Posted by tialys in Uncategorized on August 20, 2015

I haven’t blogged for a while not because I haven’t had anything to say exactly but, in the end, there was too much to say and I couldn’t filter it down into a blog post and also I haven’t had the time.

So, in a nutshell (a big nutshell – something like a coconut) 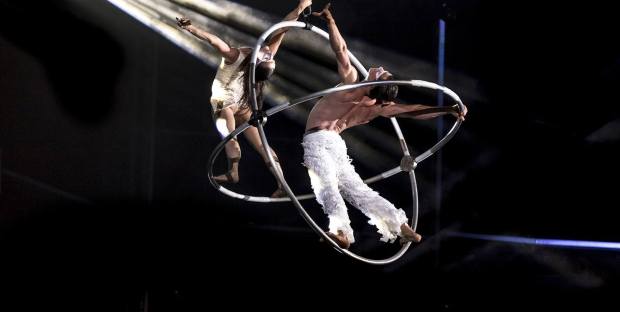 We went across the border into Andorra for a free show by the Cirque du Soleil.  The heavens opened, a storm raged, we bought plastic ponchos and the rain stopped 5 minutes before the show started.  The show was magnificent and we were damp but happy.  The story behind the show was supposed to be something about the history of Andorra but, as with all the Cirque du Soleil shows, I don’t actually know what was supposed to be going on.  I only know that I am in constant amazement at what the human body is capable of if possessed of bendy limbs, muscles like steel, a body weight no heavier than a gnat and an apparent fearlessness of small spaces/high places/empty air between waiting arms.

Having recently had a travelling circus in this part of France boasting tigers, a lion and ‘the largest hippopotamus in Europe’ – and this in a ‘civilized country’ – I wonder why anybody would need to gawp at caged wild animals exhibiting unnatural behaviour when they can see fully consenting human beings in beautiful costumes doing amazing things with their super fit bodies.  That sounds wrong somehow but you get my drift.

Being a tax free independent principality, it is the done thing in Andorra to go and marvel at the enormous bottles of alcohol for sale at silly prices – or is that just us?

The next morning we drove down into Spain, forgetting that the first Saturday in August is the day that all of France decides is the start of their annual holidays, jump in their cars and pack the roads – this despite the fact that the kids have been on school holiday since the end of June.  We queued for an hour to pay for the privilege of using a toll road as did the rest of France apparently.

When we finally arrived at our destination – a port called Cadaqués – it was beautiful and we pondered buying something there for holidays, rental and eventual retirement.

Then we looked in a couple of Estate Agents’ windows, saw the prices and changed our minds not having upwards of two or three million euros to play with just at the moment.

Anyway, what they did have in Cadaques, apart from beautiful scenery, charming back streets and good restaurants, was their very own cat rescue called ‘Cats de Cadaqués’.  This is an association that raises funds to feed and, most importantly, sterilize the local cat population.  A lot of the shops and restaurants are supportive, display posters and sell cat themed items.

This restaurant has embraced the theme in a very picturesque manner. 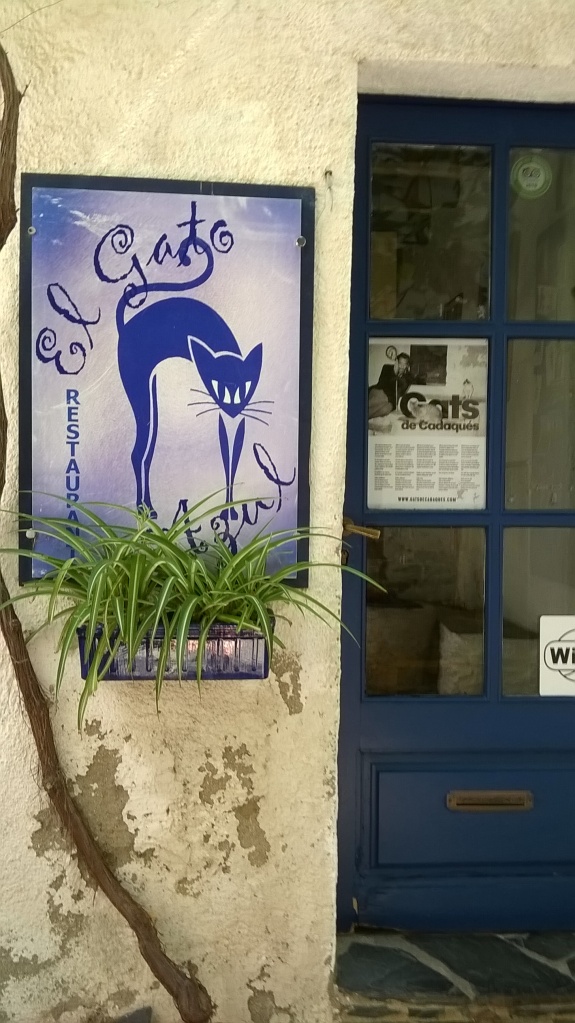 Despite being a ‘dog person’ I do also have a soft spot for cats (I have 4) and agreed to be ‘admin’ on a new Facebook page set up by the feline equivalent of Dog Rescue Carcassonne which I sometimes blog about.  I don’t really ‘do’ Facebook at the best of times – I usually have problems just uploading photos – and now I am suddenly faced with the myriad opportunities presented behind the scenes when you are an ‘admin’.  I’m still working it out.  There are other ‘admins’ so I leave most of the dealings on FB to them and I am writing ‘the blog’.  If you want to see how I am now the crazy cat lady as well as a dog botherer, you can see my new blog here.  Some comments, likes and followers would be nice as I’m finding it hard to get it off the ground. 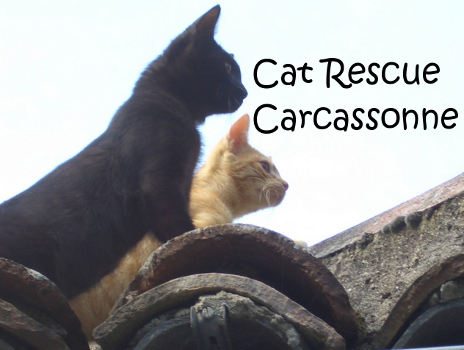 On the creative front, things have come to a shuddering halt because it was time to clear out my workroom again and, despite many black sacks and boxes of items being removed and deposited at the charity shop, the Dog & Cat Shelter’s vide grenier (boot/yard sale) stash or the bins, there still doesn’t seem to be any way for me to get to my sewing machine very easily.  No before and after pics of that, I promise, because even when I’ve finished it will not look like a magazine photo shoot workshop and, if it did, I’d never be able to do any work in it for fear of messing it up.

Also, I’ve lost my sewing mojo at the moment having made ‘the dress that nearly broke the camel’s back’ which is headed for the bin and had me heading off to Zara and other RTW outlets for a couple of items for my holiday wardrobe.  However, I might blog about that when I have more time so, for now, I’m saying ‘tchau’ which is how you say goodbye in Portugal apparently and that’s where I’m heading for some time away from the computer, the phone, the messy workroom and the dogs and cats and chickens.