A Foray Into Flannel

Yes, I have been foraging for flannel this past couple of weeks.  Well, I haven’t quite resorted to flannel nighties yet but I have started amassing flannel sheets and fabric for my favourite thing of the moment which is making rag quilts.  I found some vintage flannel on Ebay which came in some pretty little prints but, as it was in the U.S. the shipping cost more than the fabric so I’ll have to narrow my search to the U.K. and France in future. 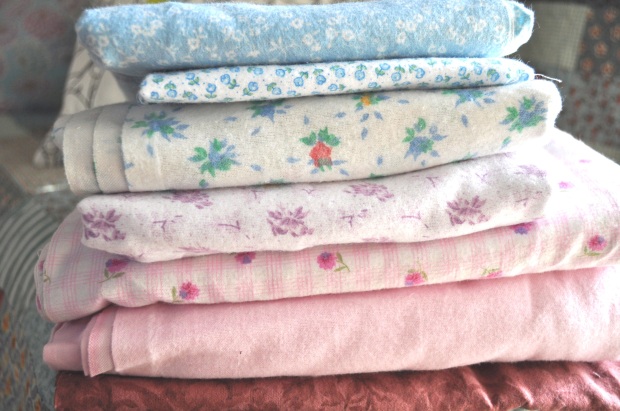 After scrounging some more pieces of flannel from my friend Sandra – including a beautiful soft bolster cover which I couldn’t actually bear to cut up! – I set about the fairly mammoth task of cutting it all into 20cm squares which I did photograph but, as the weather is so pants here at the moment, I couldn’t get a good enough picture.  However, I am sure you can imagine almost 300 20cm flannel squares cut by hand – a big thanks here to the inventor of the rotary cutter without whom it would not have been possible or at least not have been attempted.

I won’t bore you with the details of  ‘how to make a rag quilt’ here as I followed an excellent tutorial which, if you want to make one, will be all the information you need.  The only things I did differently was to use flannel for all three layers and use bigger squares.  Also, having had a go at a rag quilt some time ago and almost ended up with a claw for a hand, I invested (very wisely) in a pair of Fiskars rag quilt snips which spring back open after every cut, have blunt ends to avoid snipping your stitches and make the job so much easier they are worth every penny.   Also, I went a bit ‘maverick’ and each time I joined a row of squares I snipped the seams to about half an inch of the outside edges so that it wouldn’t seem such a daunting task once all the rows were joined. 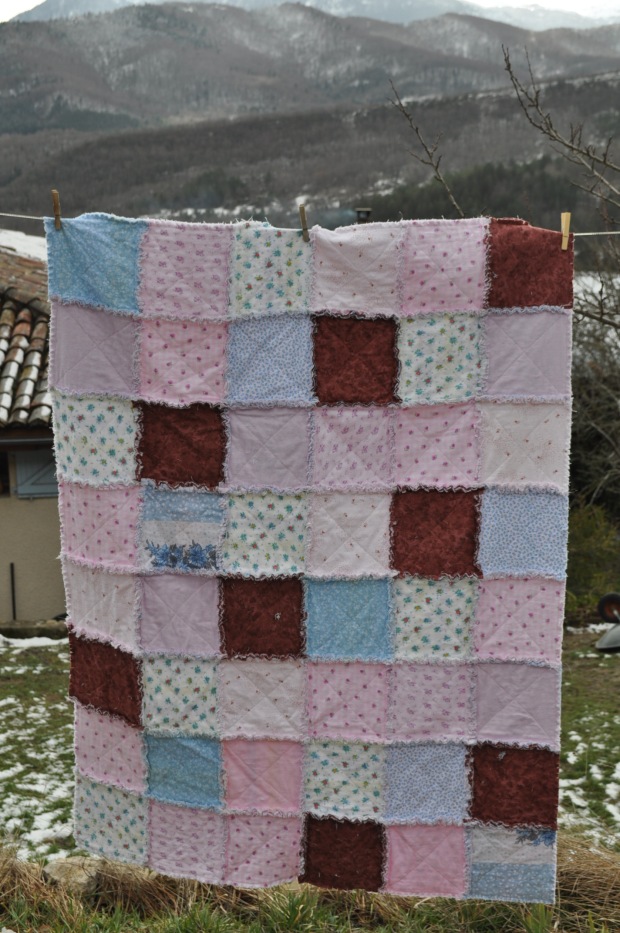 Here it is after one wash.  I told you the weather was grim!  The amount of lint that comes off these buggers is phenomenal so, not knowing where the local launderette is, or even if there is one, I put it in an old pillow case and sewed up the end and put it in my own washing machine.  You are supposed to tumble dry them too, to get the seams to go ‘fluffy’,  but I haven’t got one of those so, until I go and find a launderette and case the joint to see if there is a ‘guardian of the machines’ who might object to me putting such a lint-shedding object into one of her babies, I will just keep shaking it and, with a soft toothbrush, brushing those fraying seams up.

I do like the look of the soft cosy flannel and all those fluffed up seams – it looks all comfy and cuddly – but, as a bonus, the other side looks like a regular patchwork so you can always turn it over and ring the changes. 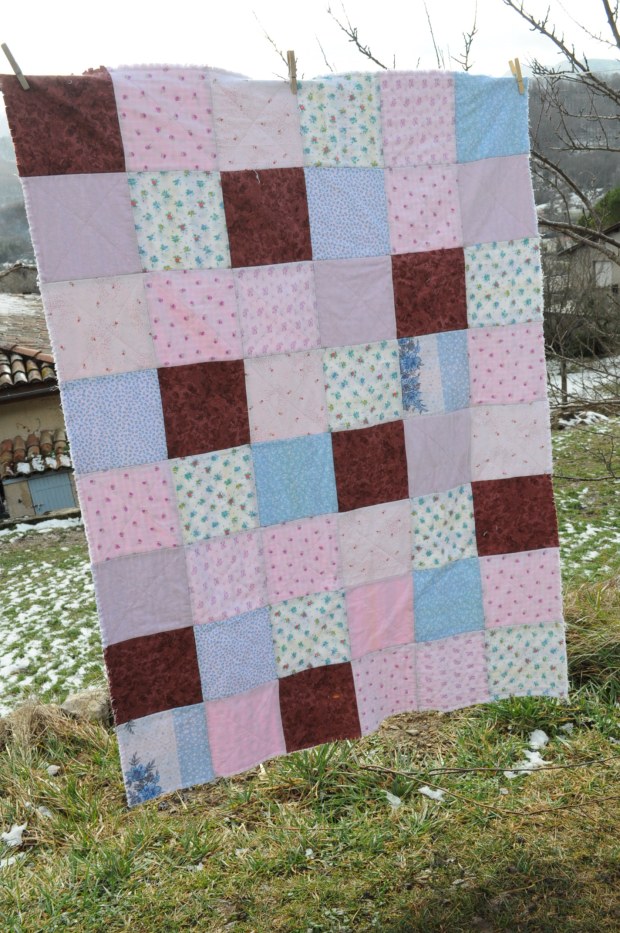 Nine days to go until my youngest’s 18th and her quilt top is ready and waiting to be sandwiched and quilted.  I waited 15 days for some cotton batting to arrive from the U.S. – it’s hard to get the good stuff here – but, when it got here yesterday, I realised that it could only be quilted up to 2 inches apart and I am going for a ‘minimalist’ approach so, after all that, I have had to order some Hobbs Polydown from the U.K. which will hopefully arrive soon so that I can handquilt 25 stars and then bind it ready for the big day.  It might be a teensy bit late. 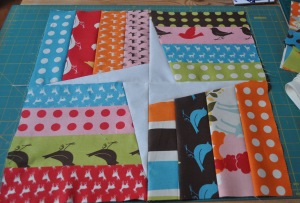 Just one block – there are 25 of these, just haven’t taken a photo of them all joined up yet.

Meanwhile I have made another soft and cosy, towelling backed throw with some gorgeous Tilda fabric  and have started piecing my Union Jack so I am not being idle. 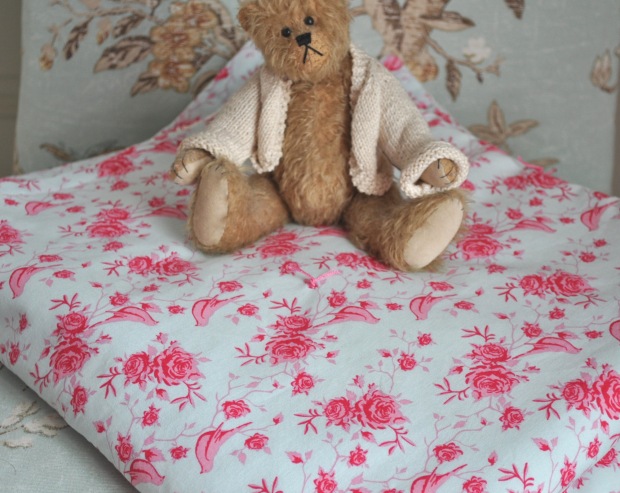 and not liking to let anything  go to waste – I used the remainder of the Tilda fabric to put a roof on one of my little cartonnage house boxes. 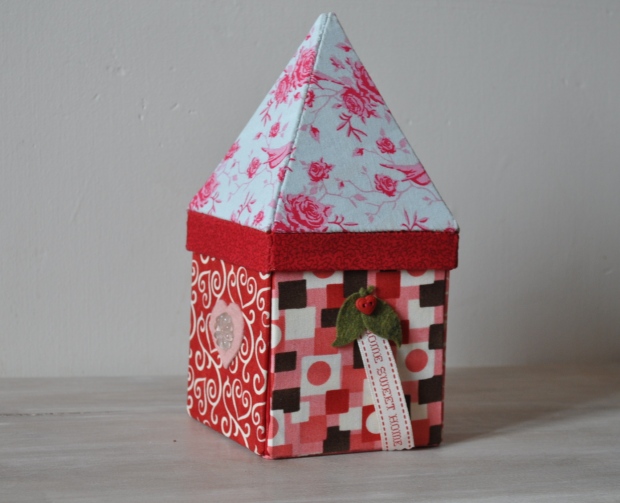 Don’t miss my next post when I will be attempting to make my own knickers! Although not, I hasten to add, in flannel.