Posted by tialys in Garden and Wild Life on August 6, 2021

I was going to do a general ‘English country garden in August’ post today because I’ve been taking photos around the place to keep a record of what’s going on in the garden now that we’ve been here for almost 9 months and thought I might as well share!!

We didn’t have a clear idea of what was already planted in the garden by the previous owners as we moved in the late autumn/winter but now we do and the current ‘Head Gardener’ hasn’t been able to resist adding a lot of new plants despite all the good intentions we had of ‘wait and see’ so it’s a little bit of a jungly cottage garden at the moment.

Despite Dahlias having a bit of a reputation for being ‘old fashioned’ – whatever that means in terms of plants and flowers – I love them for their ‘in your face’ beauty, kaleidoscopic colours and variety of forms – I wanted to plant some for cut flowers but, when it comes to it, it seems a shame to disturb them.

Well, apart from these inherited ones growing in a raised bed in the vicinity of the veg patch.  They are fair game. 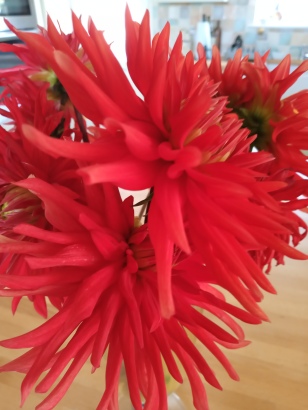 So, I’ll leave the lavender bushes, the sunflowers, sweet peas and veggies – and sewing –  for another post and leave you with my amateurish (on phone in intermittent sun) attempts at capturing some of these lovelies.

I can’t remember any names except I think one is called ‘Crazy Love’ and that seems appropriate. 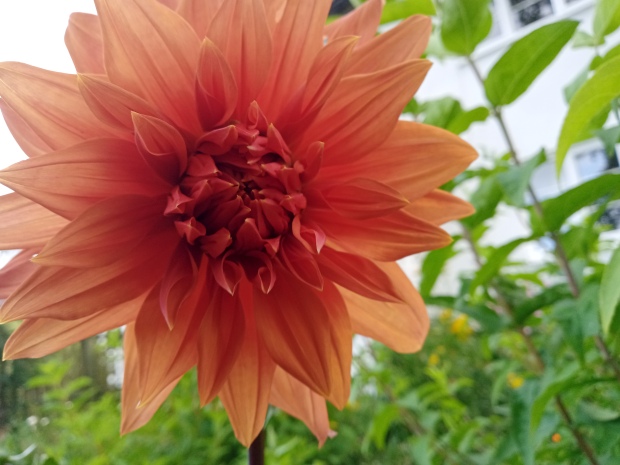 and last but definitely not least my favourite one of all.

Until I see an even more lavish one that is.

Are you a Dahlia fan?