A Walkie Round The (New) Garden Part 1

Posted by tialys in Garden and Wild Life, Life in General on December 2, 2020

One thing that has taken me by surprise now I’m back in England is that the days are so short- like my memory apparently seeing as I lived here for most of my life before my French adventure.  It’s not properly light until gone 8 in the morning an,d it’s almost dark by 4 in the afternoon, even on a fairly sunny day like today.  The days in France are also shorter in the winter obviously but, maybe because the weather was generally much better where we lived, the daylight seemed to last longer.

So, even though it was a relatively bright day today my photos of the garden don’t really reflect that.

As Cathy (of nanacathy blogging fame) did when she moved house earlier this year, we are looking at the garden and wondering what the changing seasons will bring.  Some things are obvious but I’m sure there’ll also be some surprises.

This massive old oak tree rules over part of the front garden and is often full of huge black crows but there are smaller birds in residence too, lots of blue tits, blackbirds, wrens and we’ve seen two types of woodpecker up there too.  A pair of binoculars has suddenly appeared from who knows where.  I’ve become a twitcher – who would have thunk it? 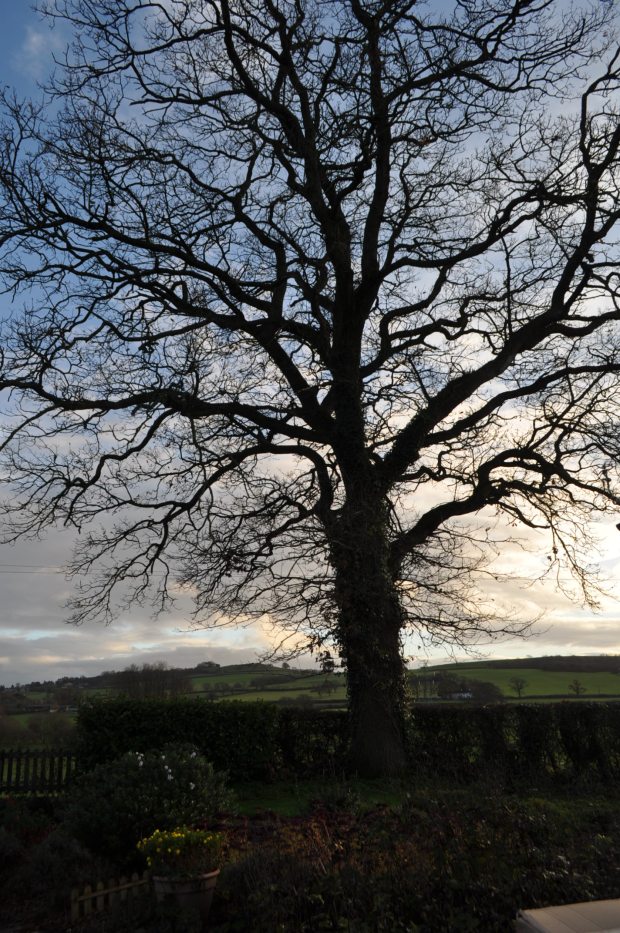 The former owner, perhaps in a moment of madness,  had two ponds built.

This is the large one and is full of fish.  Also, the pond plants look as if they will be glorious come Spring/Summer.

Spot the badger trail leading down to the pond from the field behind.

Apparently,the pond is so well balanced she never fed the fish nor needed to mess with the planting so, hopefully, it will be low maintenance.

This is the smaller pond which has no fish but apparently has frogs and newts at the appropriate time of year.

It’s tucked away in a corner of the garden – I’m imagining a bottle of wine and a couple of glasses completing this picture in the fullness of time.

Mind you, a bigger surprise than the short days – well, shock really – is the price of wine.  Lordy!  I’ll have to cut back my consumption of the fermented grape or do without food.

Some things in the garden seem a bit ‘niche’ – I’m being polite here.  The little hedge planted for no apparent reason and the shale path that leads nowhere will have to go (says Mr. Tialys).

Something else that will have to go is most of this black plastic stuff  – stop me if I’m being too technical – I know it keeps the weeds down but it also keeps other things down and it looks a bugger (says Mr. T.).

Indeed, he has already made a start and uncovered some rather nice looking soil – but then we are used to soil full of rocks having lived in the foothills of the Pyrénees. 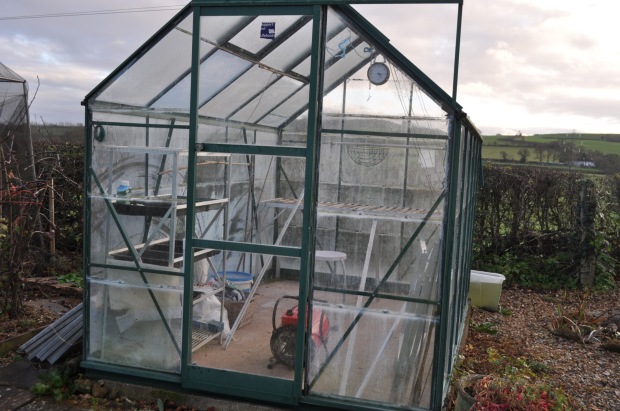 as does this ex-chicken run which was more recently put to use for growing strawberries. 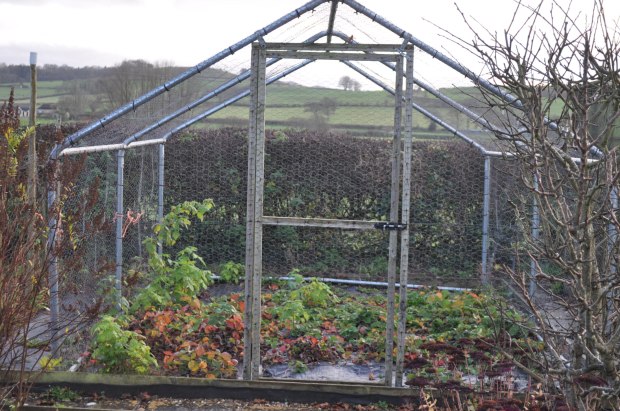 Anyway, anybody would think it was me going to work my fingers to the bone in this new garden,  Not at all.  I might pull the odd weed, prune a rose and dead head a daff from time to time but anything involving spade, fork or shovel is not my forte.  I would say it’s because fault would be found with anything I did in the garden by the head gardener but, although that is true, it is also a very good excuse.

I’ll just go off down the lane with the dogs for my exercise instead, dodging the horse poo and general mud – how I’ve missed hosing the dogs down after walks and wearing wellies.  I have some rather dapper shiny black ones although it’s actually hard to make the colour out after five minutes of ‘mud, glorious mud’. 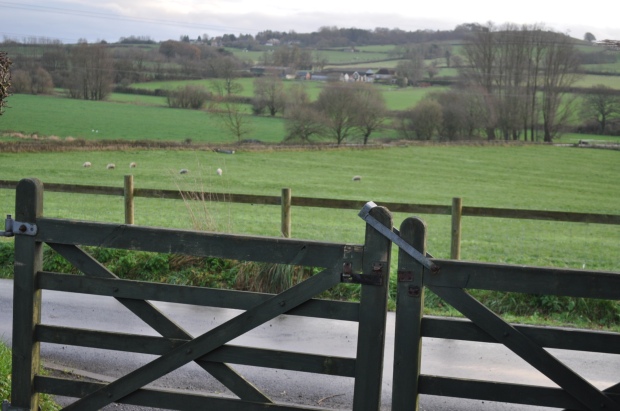